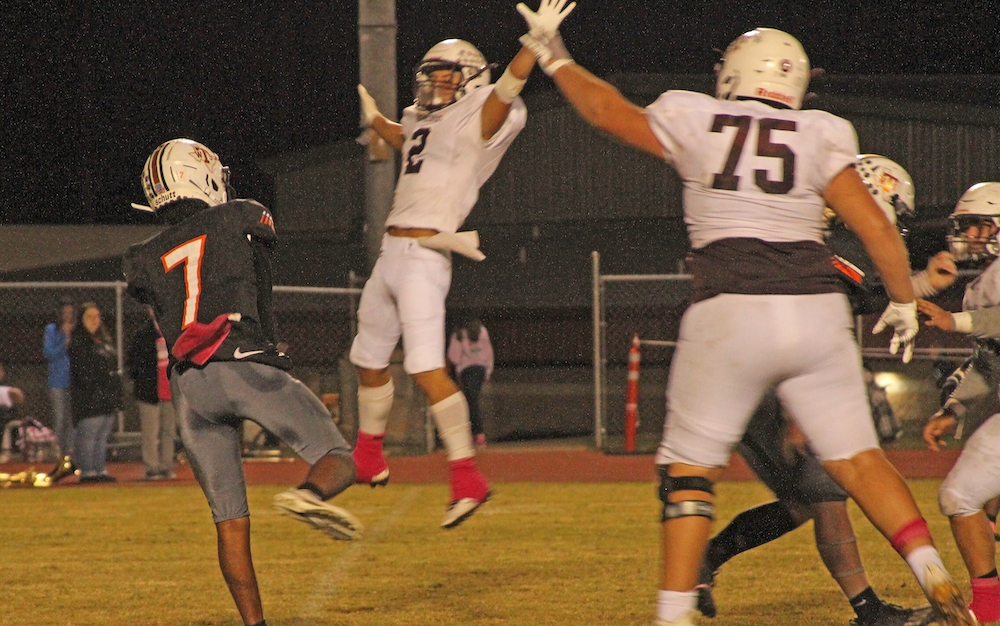 HOUSTON COUNTY - A 100-mile-plus trip to Pineland was worth it for the Lovelady Lions and their fans Friday night.

The Lions fended off the West Sabine Tigers 44-34 for their second straight district victory.

After West Sabine made it a four-point game late in the third quarter, the Lions put the game away with a touchdown early in the fourth quarter.

Lovelady started its first series with good field position after Joel Pomeroy covered the kickoff on the Lion 49.

Shaun Easterling took the ball on first down and reeled off a 34-yard run behind the offensive line manned by Matthew McFarland, Caleb Larkin, Jaxson Reeves, Mikey Montemayor and Carter Murray.

Three plays later Easterling capped the drive and Eric Anderson ran the two-point conversion for an 8-0 lead with 10:41 in the first quarter.

Lovelady’s onside kick failed to go the required distance, so West Sabine took over on the Lion 43 and scored five plays later on a short pass. An extra point kick failed, leaving the Lions with an 8-6 lead with 9:02 left.

The Lions went up 16-6 with an 11-play, 77-yard drive after Keivon Skinner downed the Tigers’ kickoff at the 23 yard line.

Easterling carried five times, dragging defenders behind him on several plays. The drive also included a four-yard carry by quarterback Slade Murray and a nine-yarder by Conner Martinez. Easterling scored from four yards out with 3:14 left in the first quarter and Martinez ran the conversion.

West Sabine took advantage of a momentum swing and scored two unanswered touchdowns to go in front by four early in the second quarter.

Late in the first quarter West Sabine recovered a fumble at the Lion 25 and cashed in two plays later on a quarterback keeper. The Tigers threw for two points to close the gap to 16-14 with :06 left in the opening period.

West Sabine took the lead, 20-16, with 7:39 left in the second quarter after taking over at the Tiger 17 on a punt. The Tigers drove down the field and scored from three yards out but were unsuccessful on the conversion.

The Lions regained the momentum with back-to-back touchdowns before halftime.

A fair catch by Pomeroy on the kickoff set up Lovelady’s offense at the Lion 38. Except for two short runs by Martinez and Murray, Easterling accounted for most of the yardage on the seven-play drive and scored on a 35-yard run. Martinez ran for the conversion to give the Lions a 24-20 edge at the 4:20 mark.

After forcing a Tiger punt that went out of bounds at the Lion 43, Easterling picked up four on first down and then Murray connected with Skinner on a 53-yard touchdown strike. Easterling’s two-point conversion run gave the Lions a 32-20 lead at the 2:16 mark in the first half.

The Lions weren’t able to breathe easy for long, though.

After kicking off to the Tiger 28, West Sabine marched down the field and scored five plays later on a six-yard pass and then threw for the conversion to make it a four-point game, 32-28, with :24 left in the half.

A crucial fourth-down stop by the Lion defense at the 10 yard line shifted the momentum back to Lovelady. Moore had several tackles while Martinez and Murray helped keep the pressure on the Tigers until they ran out of steam.

The Lions then drove 90 yards down the field on five carries by Easterling, four by Slade Murray and three by Eric Anderson. Martinez capped the 13-play drive on a four-yard run and a two-point conversion was unsuccessful but Lovelady was up 38-28 with 1:19 to go in the third.

Refusing to go away quietly, the Tigers roared back on their next possession and struck quickly on a two-play drive. After being stopped for a two-yard loss on first down, West Sabine took it the distance from 67 yards out on the next play. The conversion failed, leaving the Lions with a 38-34 lead with :28 left in the third.

Lovelady started its next possession at its 40 yard line after the kickoff and put together an eight-play scoring drive.

The Lions drove down the field on five carries by Easterling, a seven-yarder by Murray and a 15-yarder by Anderson.

With the ball inside the 10, Easterling took it rest of the way for the Lions’ final touchdown midway through the fourth quarter that sealed a 44-34 victory.