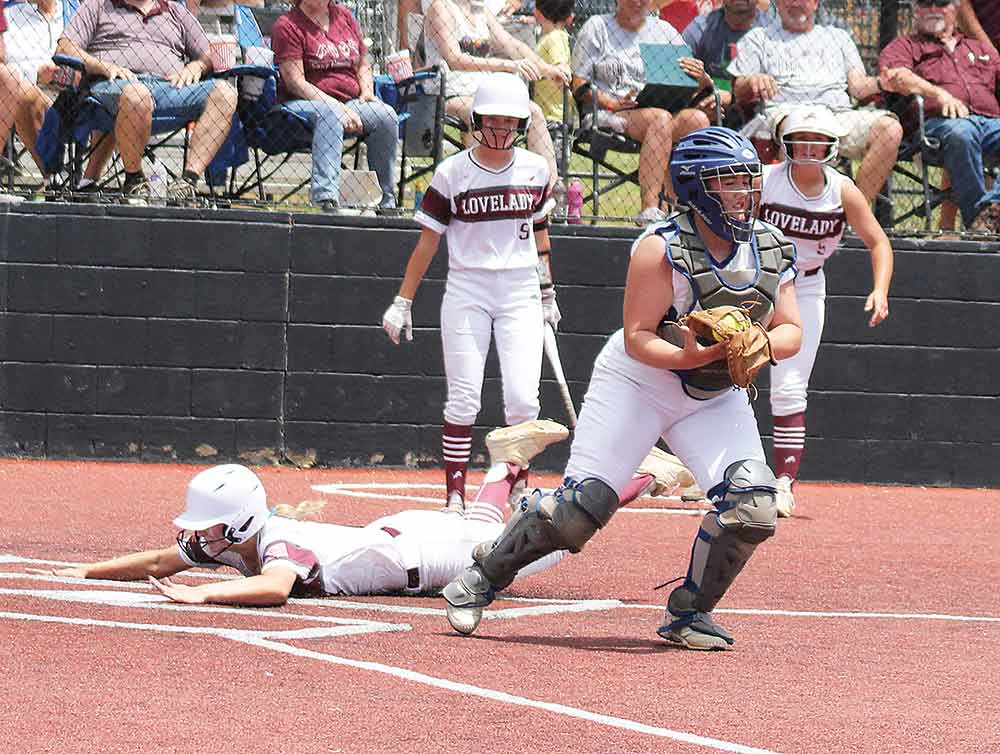 Macie LaRue pitched 12 scoreless innings in the series, giving up a total of two hits with 21 strikeouts and one walk.

The Lady Lions played error-free in both games while Beckville was plagued with 11 miscues in the field.

Lovelady has posted shutouts in five of its six playoff wins. Shelbyville managed to score three runs on the Lady Lions in the bi-district round.

In Game 1 last Wednesday, the Lady Lions scored in every inning and Macie LaRue pitched a one-hitter in a five-inning shutout. LaRue struck out eight and walked none of the 16 batters she faced.

Lovelady scored three in the first inning. After Mihyia Davis and Haven Prager both scored on wild pitches, Linda Martinez came home when LaRue reached on an error by the shortstop.

Beckville’s leadoff batter in the second managed to collect the only hit off LaRue, who fanned the next three batters.

Lovelady went up 7-0 in the second. Davis singled, stole second and third, and scored on an error by the third baseman.

With two outs, Prager drilled a shot over the second baseman’s head for a single, stole second and scored on a base hit by Martinez. After Rylee Biedrzycki singled, Martinez scored on a wild pitch. Biedrzycki went to third on the same pitch and came home when LaRue poked a ground ball single to right field.

The Lady Lions resumed their scoring frenzy in the third.

Albinus led off with a bunt single, stole second and went to third on a one-out single by Davis, who went 4-for-4. With With two outs and two runners aboard, Prager belted a three-run bomb over the center field fence to score Albinus and Davis for a 10-0 lead.

Lovelady tallied its final two runs in the bottom of the fourth with a two-out rally. Scout Lovell hit a two-RBI single after Pipkin and Davis both got aboard on bunt singles.

Lovelady collected a total of 14 hits off pitchers Bethany Grandgeorge and Reese Dudley.

With several Lady Lions competing in the state track and field meet Friday in Austin, the series resumed Saturday.

Lovelady led 4-0 after two innings but was held scoreless over the next three innings.

The Lady Lions put the game away with nine runs in the last two frames to clinch the series.

LaRue recorded another gem in the pitcher's circle, allowing no runs and one hit with 13 strikeouts and one walk in seven innings.

Beckville's only hit was a triple in the third by Dudley.

Martinez and Davis both batted 3-for-5 while Morgan Womack, Biedrzycki and LaRue had two hits apiece. Lovell had one hit, an RBI double in the first that put Lovelady on the scoreboard.