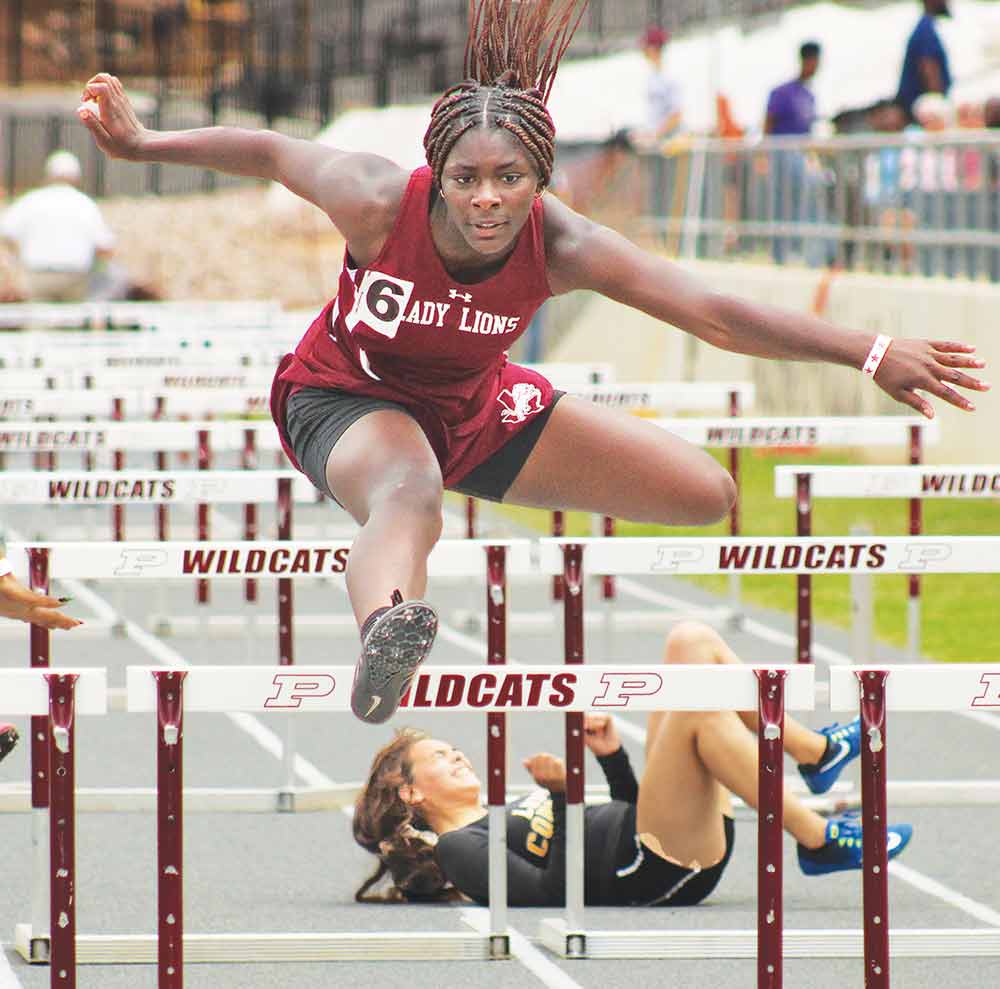 Freshman Anyya Mitchell leaps over the final hurdle on the way to finishing second in the regional 100-meter race while a rival takes a tumble Saturday in Palestine. LARRY LAMB | HCC

PALESTINE-- Lovelady athletes turned in banner performances at the UIL Class 2A Region III Track and Field Meet over the weekend.

The Lady Lions qualified for state competition in five events and the Lions advanced in three.

In addition, the Lady Lions finished as the regional  runner-up team during the two-day meet at Wildcat Stadium.

Six PRs were set by Lovelady athletes in qualifying for state.

"We have eight kids who qualified for the state track meet and three will be competing in two events," pointed out Lovelady head track coach Will Kirchhoff.

"I couldn't be prouder of them. Hard work pays off because those eight are working fools and they've reset the bar for Lovelady track and field. The two kids who went to state last year kind of opened the eyes to a bunch of these guys who saw you can make it happen. To quadruple the number of kids going to state just shows they've reset the bar and we'll carry that on to Austin," said Kirchhoff.

Lovelady's softball team eliminated Shelbyville in the bi-district playoffs Thursday night and that rivalry continued the next day at the regional track meet.

The Lady Lions had a 15-point lead over Shelbyville in team standings going into the mile run. Shelbyville won that event and then took the mile relay in the final event to claim the regional title with 83 points. Lovelady finished second out of 28 schools with 68 points.

The top two places in each event move on to the state meet on May 12-14. Class 2A competition will be Friday, May 13 at Mike Meyers Stadium.

Lovelady's state qualifiers include one relay team and six individuals.

Kylie Pugh, a junior, took home the regional crown in discus throw with a heave of 112'-05”.

Junior Scout Lovell earned a silver in pole vault competition Friday afternoon after playing catcher in the Lady Lions' double-header the night before. Lovell set a PR with a 10-0, which is six inches higher than her previous best.

The girls 4x200 race came down to a battle between Lovelady and Shelbyville, which posted the winning time of 1:46.93. The Lady Lion crew of Mitchell, Lovell, Davis and senior Bailee Albinus were second with a PR time of 1:47.01.

The same foursome of Mitchell, Lovell, Albinus and Davis placed third in the 4x100 relay with 50.83.

Lovelady boys finished sixth out of 31 teams competing in the regional meet.

Junior Shaun Easterling earned his second state appearance in the 110-meter hurdles. Easterling came in second with a PR time of 15.38 seconds.

Sophomore Erik Castillo recorded a PR to take second in discus throw with a distance of 138'-09”, which is seven feet better than his previous record.

Only the top two places normally advance to state, but junior Landen LeBlanc's PR  of 13'-06 in pole vault was good enough to earn him a wild card berth. LeBlanc improved his height by a foot.

LeBlanc and teammate Cole Harris both cleared the bar at 13'-06' but LeBlanc claimed a bronze based on misses. "Landen had zero misses at the previous height and Cole had one miss at 12-6," explained Kirchhoff.