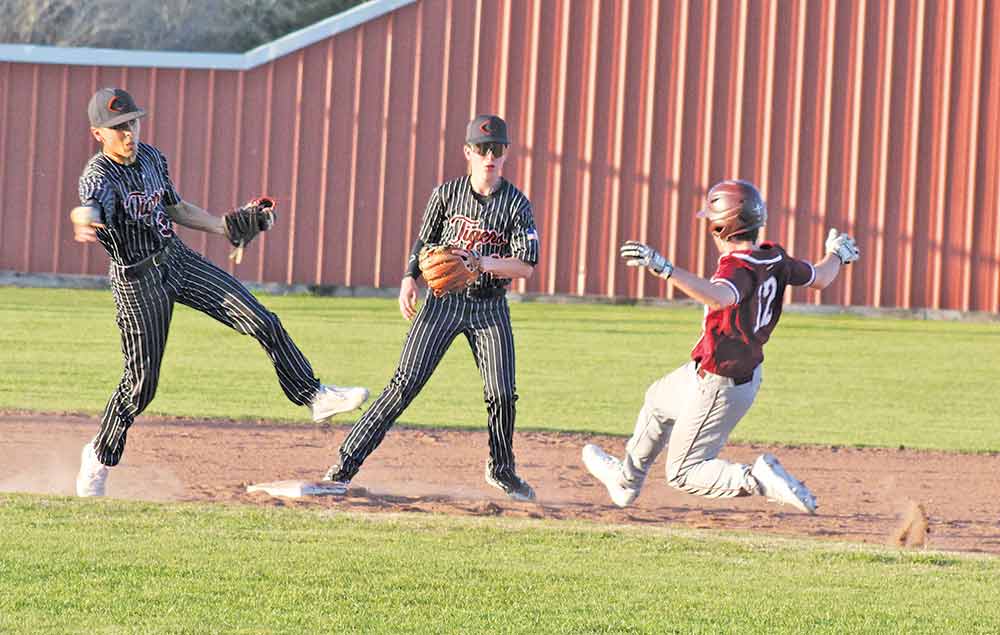 Lovelady's Tyler Gilchrist (12) slides to second for a double in the fourth inning against Centerville on Friday. LARRY LAMB | HCC

Centerville, ranked No. 5 in this week's THSBCA state poll, improved to 5-0 in district and 13-3 on the year.

The Lions, 3-2 in district, played Normangee on Tuesday and host Latexo on Saturday.

After Centerville took a 1-0 lead in the first, the Lions tied the game but were unable to muster any offense the rest of the night.

The Lions scored their only run after Jayton Crawford doubled and went to third on a wild pitch. He came home on a ground out by Skylar Pipkin.

The Tigers hit a one-out triple in the second and went up 2-1 on a sac fly.

With two outs in the third, Crawford hit his second double and Pipkin singled but was caught stealing second.

Centerville went up 3-1 in the fourth on a RBI double.

In the fourth, Tyler Gilchrist hit a two-out double but was stranded.

Centerville tacked on another run in the fifth and put the game away with five runs in the seventh.

Lion starting pitcher Slade Murray went four innings and Brady Mikes worked the fifth and sixth frames. Lance Pierce took the mound in the seventh and was relieved by Crawford.

In last week's game at Leon, the Lions gave up a run in the second before taking a 4-1 lead in the third.

Pipkin's ground ball single drove in Murray and Crawford for a 4-1 lead.

A leadoff homer by Leon in the bottom of the third made it a two-run game.

The Lions went up 5-2 in the fifth after Murray drew a leadoff walk and scored from first when Crawford reached on an error by the shortstop.

In the sixth, leadoff batter Tyler Gilchrist walked and courtesy runner Blake Patrick advanced all the way to third on a sac bunt by Pierce. Mikes drove in Patrick with a two-out fly ball single and Murray doubled but both runners were left on base.

Leon's leadoff batter walked, went to second and third on wild pitches, and scored on a fly ball to make it 6-3.

Tyler Gilchrist started on the mound and worked 6 1/3 innings, giving up three runs on six hits while striking out 11 and walking five. Mikes recorded the final two outs to secure the victory.