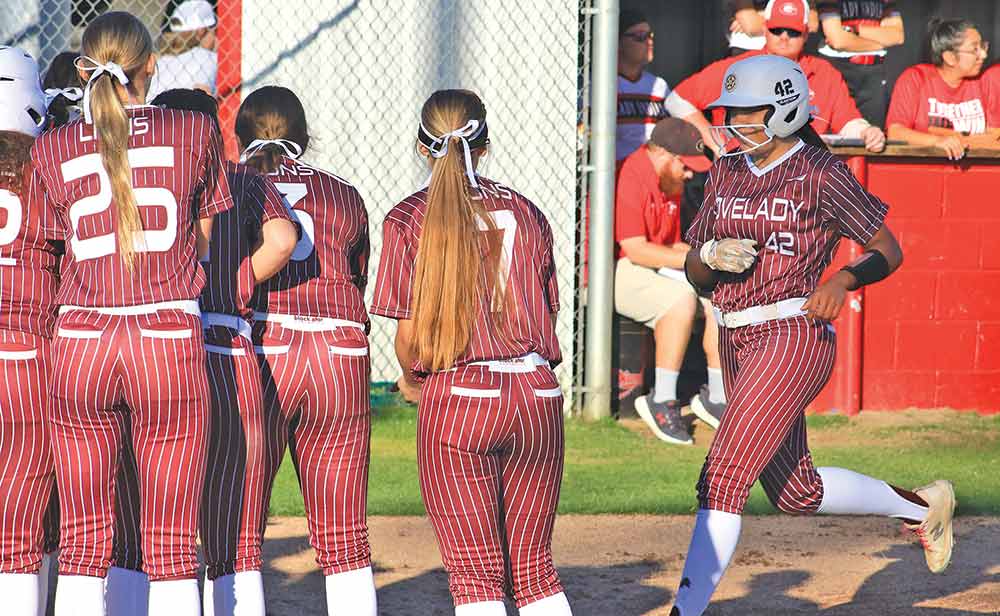 Lovelady's Mihyia Davis is greeted by her teammates after hitting a leadoff homer against Groveton in a district contest last Tuesday.

GROVETON -- Fans attending the District 21-2A softball showdown between No. 1 Lovelady and No. 16 Groveton last Tuesday got a bonus.

The Lady Lions won 10-6 in a battle that turned into a home run clinic featuring four dingers by Lovelady and a grand-slam by Groveton.

Mihyia Davis mashed the fourth pitch of the game for a leadoff homer on a pop fly to left field. Scout Lovell doubled and scored on a two-out double by Makenna Pierce to give Lovelady a 2-0 lead.

Davis gave an encore performance in the second when she stepped up to the plate with two outs and drilled a fly ball into centerfield.

In the third frame, Morgan Womack belted a two-run shot to drive in Linda Martinez, who reached on a fielder's choice.

After having just one baserunner in the first two innings, the Lady Indians erupted with a grand-slam homer by Megan Luce to make it a 5-4 ballgame.

After a scoreless fourth by both teams, Lovelady's Mimi Sandoval led off the fifth with a homer to left field that ignited a five-run flurry. Pierce drew a one-out walk, stole second, went to third on a line drive to left by Womack and came home on the throw.

Womack stole second and scored from third on single by Haven Prager.

Groveton plated two runs in the bottom of the fifth on a double and a pair of RBI singles.

Sandoval, who relieved LaRue in the fourth and fifth frames, gave up five hits and two runs with two strikeouts and one walk in 1 2/3 innings.

Lovelady retained its top ranking in this week's TGCA state poll but Groveton dropped out of the Top 20.