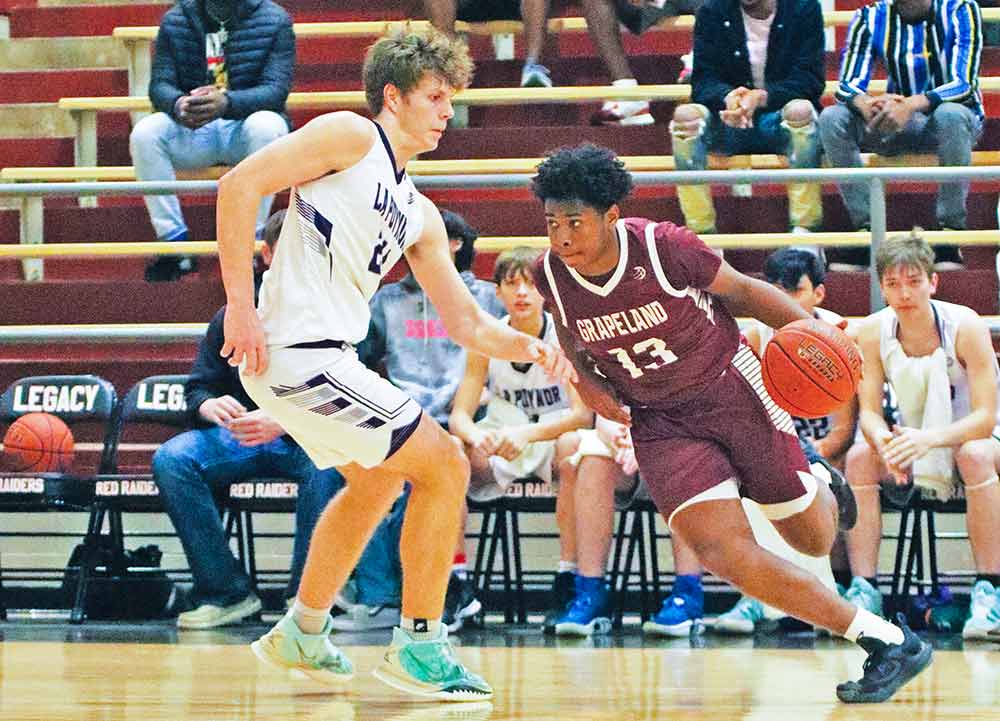 Grapeland Johnny Lamb drives against LaPoynor in the regional quarterfinals last Tuesday in Tyler. LaPoynor prevailed 72-60 and went on to win the Region III championship over the weekend in Athens. Marsha Cook Photo

TYLER – After having their championship dreams shattered by Grapeland in the 2021 regional finals, the LaPoynor Flyers turned the tables on the Sandies in this year's regional quarterfinals.

LaPoynor withstood a late rally by the Sandies to win 72-60 last Tuesday night and advance to the Region III tournament.

Last year, Grapeland knocked off LaPoynor 75-57 in the regional final to earn a berth in the state tournament.

LaPoynor threatened to blow the game wide open after taking its biggest lead of 17 points midway through the third,  but the Sandies rattled off a 9-0 run consisting of three consecutive  treys.

Trailing 51-34, Johnny Lamb sparked a flurry of triples and then thwarted LaPoynor’s next possession with a steal. Sandie fans were able to breathe a little easier after Cole Goolsby heaved in back-to-back treys that cut the deficit to eight, 51-43, with 2:20 left in the third.

LaPoynor went back up by 13 before Lakerina Smith hit a late  basket to make it 56-45 at the end of three.

The Flyers opened the fourth quarter with a trey but Grapeland closed the gap to eight with 3:45 left on three consecutive treys – one by Johnny Lamb and two by Goolsby.

After the Flyers took a 61-48 lead, the Sandies trimmed it to single digits on back-to-back treys by Goolsby and Riley Murchison.

With the lead cut 61-54 with 3:45 left, LaPoynor called a time-out and then worked the ball to big man Dijuan Whitehead for a layup to push the lead to nine.

Whitehead fouled out on LaPoynor’s next possession with a minute left when Lamb took a charge.

A Cadarian Wiley bucket made it a seven-point ball-game, but the Sandies would get no closer down the stretch.

After falling behind by 10, Murchison made it 67-59 with 1:30 left but LaPoynor hit four of four free throws in the final 25 seconds to ice the win.

Murchison, a junior, led Grapeland (28-11) with 20 points and six rebounds. Junior Omarian Wiley recorded a double-double with 13 points and 14 rebounds.

The Flyers advanced to the Class 2A Region III tournament at Athens where they knocked off No. 4 Timpson 60-59 and then edged Beckville 76-71 Saturday to punch their ticket to the Final Four.