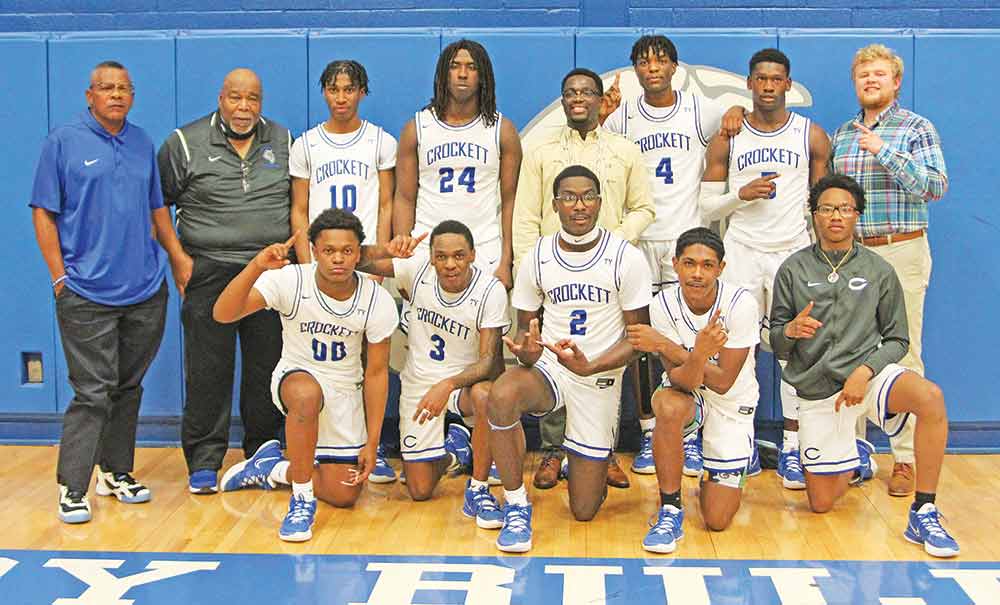 CROCKETT –  It was payback time for the Crockett Bulldogs when undefeated Franklin came town for the District 20-3A finale last Tuesday.

Franklin used a late rally to edge Crockett 65-61 in the first round of district play Jan. 21.

This time, the Bulldogs put the game away with a 32-9 fourth quarter frenzy that sealed a 75-52 victory and earned them a share of the district championship.

Fans who packed the old Crockett High School gym were treated to a classic match-up featuring two state-ranked squads --  No. 12 Franklin and No. 14 Crockett.

“I’ve been saying all season that we’re a third quarter team, but tonight we were a fourth quarter team,” said Bulldogs head coach Drae Murray.

Coach Murray called a time-out at the five-minute mark but said he had second thoughts about it.

“That was the exact time I called time-out the first time we played Franklin. I told coach (Parker) Emerich I hated calling it. It’s like deja vu. We had the momentum and the flow was going our way. He reassured me that it was a good decision and our guys would play hard. He was right,” Murray said.

Murray warned his crew not to underestimate Franklin and let their guard down in the closing minutes.

"Franklin has championship DNA. They’re not going to give up so you have to continue to play hard and finish the game,” said Murray, referring to Franklin’s 2021 state championship football season. “A lot of those basketball guys played football and they know what it takes to win. After that time-out, we got a turnover and layup. Our guys responded tonight.”

With memories of their earlier loss to Franklin lingering, the Bulldogs stepped on the gas and rattled off a 20-4 run in the final 3 ½ minutes.

A dunk by senior Delvin “DJ ”Walker in the closing seconds put an exclamation point on the victory.

“This was D.J.’s last time playing in this gym. To finish with a dunk and score 24 points, and to be able to hang a banner in The Hop as district co-champions is going to be a memorable night for him. That’s a great way for a senior to end the regular season and now he has to be special in the playoffs as we try to make a deep run that hopefully will end in San Antonio. He’s a special kid and I’m so happy for him,” said Murray.

The old CHS gym was pressed into service during the Houston County Classic in December when a bubble developed in the court at the Hopkins Activity Center. The Bulldogs were undefeated playing all of their district home games in the old gym.

canned 11 of his game-high 24 points in the final frame.

Collins netted nine points in the fourth quarter and ended up with 16 on the night.

Courtney Byrd also was key in the fourth quarter with eight points and finished with 12.

Tayshawn Simon rounded out double figures with 10, Bre’dron Tucker had eight and Keshun Easterling had five.

Murray said Tucker brings more to the table than just scoring. “He rebounds and defends the best player on the other team every single game, so I have to give him some praise. I was hard on him at one stretch of the season and could tell he was down a little bit. But I called him in and we talked, and he’s responded,” said the coach.

“Bre’dron is such a special kid. He’s one of those kids that you can go to war with every night knowing he’s going to have your back and play hard. For the things he does besides scoring – defending and rebounding --  give me eight Bre’dron Tuckers any day of the year and I’ll be fine," the coach added.

Simon's performance also caught Murray's eye. “Tayshawn was all over the place. I challenged him to get on the floor and go for a loose ball. He almost hit his head on the front row of the bleachers just because he was playing hard. You root for kids like that.”

“Jayden was his usual self. He was really good in the fourth quarter and had nine points. Teams like to  play zone  against us because they think that’s the best way to defend against us shooting threes. Collins is so good inside if you leave him open, he’s able to hit that midrange.”

After the final buzzer, each Crockett player and coach took turns snipping the net as they savored the victory.

“Everybody got a little souvenir, something they can cherish for life. This net will go up in my office at home, not in my office at school. This is my first co-district championship and my first year as head coach so this is a very special moment for me,” said Murray.

Murray said being the only team in the district able to put a blemish on Franklin's record "feels amazing."

Since Crockett and Franklin tied for first place, the coaches agreed to a coin toss to determine playoff seeding. Franklin enters postseason as first place team and Crockett is runner-up.

Franklin was paired with Caldwell and Crockett faced Rogers in a bi-district double-header Tuesday night in Bryan.

“When we’re rolling and we’re playing as a team, we’re special. That’s what we have to do in the playoffs, play together as a team,” said Murray.