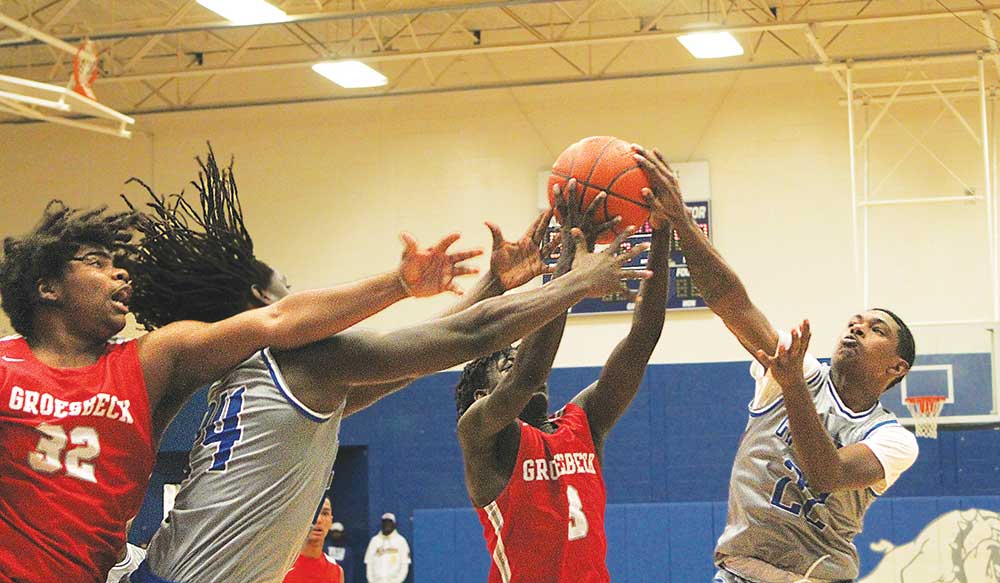 CROCKETT --  The Groesbeck Goats came to town Friday night looking for revenge after falling to Crockett on a buzzer-beater on Jan. 6.

Even on an off-night, the Bulldogs were able to fend off the challengers with a late spurt to win, 72-64.

Fairfield and Groesbeck sit third and fourth, respectively, in the district standings with five games left.

The Bulldogs host Westwood on Friday and travel to Fairfield next Tuesday,

The Bulldogs opened up an eight-point lead with 5:50 left in the game before Groesbeck cut it back to four, 61-57.

Groesbeck got no closer than six the rest of the way.

Bulldogs head coach Drae Murray said switching from man-to-man defense to zone late in the game was a key factor.

"It was taking Groesbeck like a minute to even get a shot up so that 1-3-1 defense actually saved us. I don't really like playing zone but it's something we keep in the tool box in case we need it and it worked out in our favor tonight," said the coach.

Murray noted the Bulldogs started off the game strong but began to falter when three starters got into early foul trouble. "It just went down hill from there," he said.

Walker and Easterling picked up two early fouls and Tayshawn Simon finished the half with three fouls.

"That's three starters right there that we rely on to do a lot of things. We relied on our bench guys who were able to keep us afloat, but the momentum and energy level went down in the second quarter,” said Murray.

“We closed out the second pretty strong. Jadyn (Collins) took control of the game for a little while late in the second and early in the third. That helped us get our offensive game going. Defensively, we just weren’t good tonight.”

Collins, who finished the night with 23 points, energized the Bulldogs with 11 in the second quarter and 10 in the third.

The Goats got within four early in the second half but Crockett staged an 8-0 run on three baskets by Collins and one by Easterling to pull away 44-32.

“They’re well coached and they’re physical. Everybody knows we want to go to the dribble weave and once we get in that, Groesbeck did a good job of jumping it. They’re physical with us so it makes the handoff a lot tougher,” said Murray. “It was the same way when we played them the first time. That’s how we were able to get some back doors on them at times.”

Simon booked 20 points, including three treys, and Easterling, who had 10 points in the final period, finished the night with 15.

“I had suspicions that we wouldn’t have our best night because our shoot-around was really bad today. I warned the guys you can’t take any team lightly or take them for granted. Everyone wants to beat you because you’re one of the top-ranked teams in the state. We took something from them on their home court and they came here to take something from us,” said Murray in reference to the Bulldogs’ earlier 77-76 win.

Although the Goats lost to Franklin, 54-53, last Tuesday, Murray expects them to make the playoffs.

“They’re a tough, hard-playing ball club that’s in the playoff hunt so I’m sure they’ll finish in the top four,” said Murray.

Other scorers were Boston with 5, Tucker 4, and Ajani Ellis and Iverson Rischer with 2 apiece.