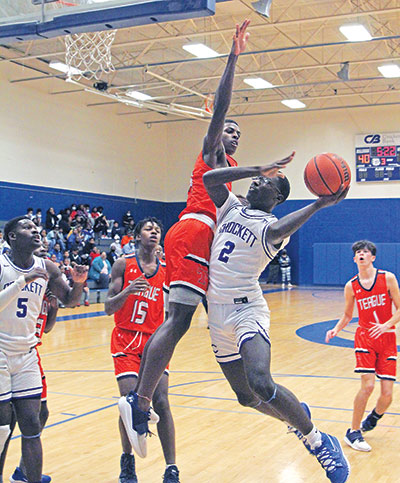 Crockett's Jadyn Collins tries to shoot around a Teague defender during the Bulldogs' 64-35 win last Tuesday.By Larry Lamb
This email address is being protected from spambots. You need JavaScript enabled to view it.

FRANKLIN --  The much-anticipated showdown between No. 11 Franklin and No. 14 Crockett for first place in District 20-3A lived up to the pre-game hype.

In a back-and-forth battle, Franklin closed out the game with an 8-0 run to edge the Bulldogs, 65-61, Friday night in a packed gym.

Franklin takes sole possession of first place with a 7-0 record while the Bulldogs slipped to 6-1.

The Bulldogs seized momentum early in the fourth quarter with a 14-7 run and took a 59-54 lead when Tayshawn Simon heaved in a three-pointer with 3:30 left.

Franklin quickly closed the gap with its own trey to make it a two-point game with 3:00 left but Delvin “D.J.” Walker sank a pair of clutch free throws to give the Bulldogs a 61-57 lead.

Franklin scored two straight buckets to tie the game with :55 left and took advantage of a turnover by the Bulldogs to take the lead. Franklin drained a trey and then hit the first of two free throws for a four-point cushion with :20 left.

Cold shooting at the charity stripe hampered the Bulldogs, who were 4 of 14 for the night. Franklin fared better at the line, hitting 7 of 16.

Walker, who returned to lineup after missing most of the second half of the Teague game with an injury, poured in 25 points to lead Crockett’s scoring and Jadyn Collins contributed 19. Walker and Collins, who each drained three treys, accounted for all of the Bulldogs’ scoring in the second quarter with 11 and 10, respectively.

Simon buried a pair of treys in the fourth quarter and finished with 7. Bre’dron Tucker tossed in 6 and Courtney Byrd chipped in with 4 points..

Franklin senior Marcus Wade pumped in seven treys to lead the Lions with 23 points. Devyn Hidrago followed with 17 and Hayden Helton had 13.

Late-starting Franklin (11-2), coming off a state championship football season, dropped a notch to No. 12 in this week’s TABC state rankings. Crockett (18-6) remained No. 14.

The Bulldogs will get another shot at Franklin when the Lions come to town Feb. 18 for the district finale.

Crockett started the second round of district Tuesday against Elkhart and hosts Groesbeck on Friday. Next week, Crockett travels to Buffalo and Westwood comes to town Friday.

Coach Drae Murray’s crew may have been looking past Teague last Tuesday night.

The Bulldogs overcame a sluggish first quarter and dominated the Lions the rest of the way to win 64-35 at home.

Holding a three-point early lead, the Bulldogs opened the second quarter with an 8-0 run to lead 23-12. After Teague answered with three straight buckets, the Bulldogs closed out the half with a 10-1 run to pull away 33-19.

Walker led Crockett’s second quarter surge with 11 points and had 14 when he left the game with an injury at the six-minute mark in the third quarter.

Collins erupted for eight points in the fourth period and finished the night with 17.

“This was a weird game. It was sloppy. It was bad. We just didn’t play well, but we picked the right game to not play well,” said Murray, referring to the upcoming showdown with Franklin.

“We’ve got a lot of things to clean up before Friday’s game. The good thing about it is we were able to learn and still get a win,” said Murray.