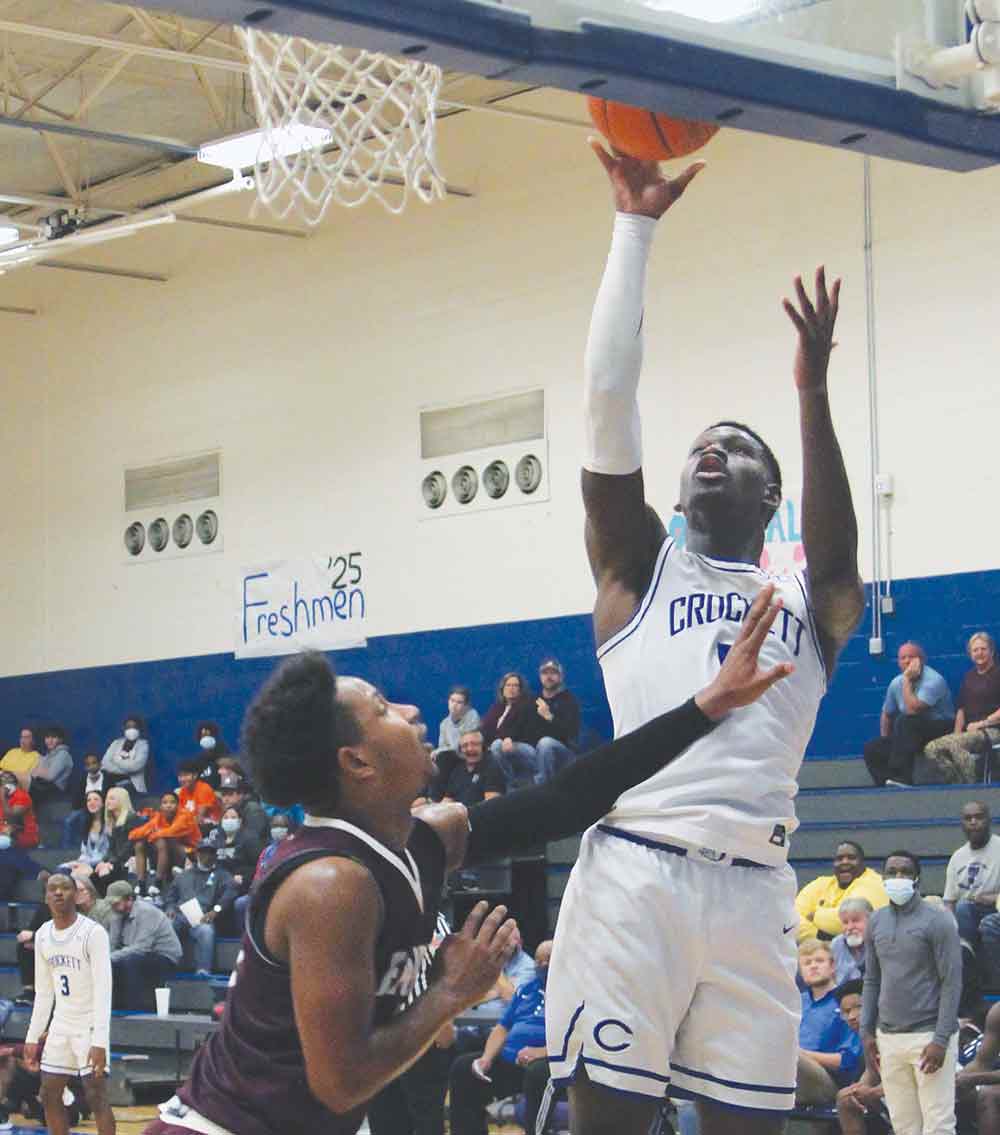 Keshun Easterling has provided an early spark for the Crockett Bulldogs in their last two games since moving into the starting lineup.LARRY LAMB-HCC

CROCKETT – Crockett Bulldogs reached the century mark for the first time this season with a 100-64 win over Westwood and won a showdown with Fairfield, 77-62, in last week's district action.

Traveling to Palestine Westwood on Tuesday, Crockett led 25-17 after a quarter and 44-29 at the break.

Westwood's hopes of upsetting the state-ranked Bulldogs faded in the third quarter with a 24-12 run that put Crockett up 68-41.

In a high-scoring final period, the Bulldogs outscored the Panthers 32-23 to record their first 100-point game.

Delvin "D.J." Walker, who tallied 17 in the fourth quarter, achieved a double-double with 33 points (3 treys) and 17 rebounds.

Bulldogs head coach Drae Murray said Walker is not only crucial as a scorer but is a dominant player on the boards. "When D.J. got his second foul in the first half I took him out of the game and Westwood got three offensive rebounds in a row, so that shows he does more than just scoring. He's rebounding the ball really well."

Keshun Easterling made his starting debut and booked 14 points, Tayshawn Simon scored 11 and Courtney Byrd contributed 10, all in the third quarter.

Other scorers were Jadyn Collins and Bre'dron Tucker with 8 apiece, Iverson Rischer with 7, Jarodrick Holmes with 4 and Ajani Ellis with 2.

“We took care of business on the road and that’s exactly what we need to do every game,” said Murray.

Another fast start set the stage for Friday night's win over Fairfield in the CHS gym.

Walker scored 10 in the first quarter and went on to lead Crockett with 25 points, including three treys.

"I texted D.J. last night and challenged him. I told him this was a big game and I needed big-time players to step up," said Murray.

Easterling, starting his second game, sparked the Bulldogs with 12 points in the first quarter and finished the night with 18.

Walker and Easterling combined for 22 first quarter points as the Bulldogs grabbed a 28-11 lead over the Eagles.

"It's crazy. We threw Keshun (Easterling) into the starting lineup for the Westwood game and the last two games we got off to fast starts. That was due to him,” said Murray, who noted that Easterling had 12 points in the first quarter against Fairfield and six against Westwood.

“We’ve been talking all year about getting off to a fast start. We did it this week and that’s why we were able to win two back-to-back games comfortably,” said the coach. “I can’t say for sure it’s due to Keshun, but the guys are coming out more focused and it’s a good thing. We’d been using Keshun to give us a spark off the bench but since we’d been starting off slow, I thought maybe he could help get us a start fast. He’s a high-energy guy. Starting Keshun worked against Westwood so I stayed with it tonight and it worked against Fairfield.”

Murray said Easterling provides a spark on both ends of the court.

“We’re able to press like we want to and then we’re able to get out and run in transition like we want to. So, it’s a good thing happening at the five position because he’s a speedster. He’s really another guard but he’s so athletic he can go over the rim and rebound the ball, make plays and defend guards. He’s a glue-guy for us,” said Murray.

“Bre’dron is another glue guy. He always brings a lot of energy and is always in the right spot at the right time. Defensively, his main strength is defending the best player every game,” the coach said.

Collins rounded out double figures 10 points, along with 7 rebounds and 6 assists.

“Jadyn did a good job attacking the middle of that zone and dropping the ball off. That’s why Keshun was able to score 18. A lot of his points came off our guards penetrating and dropping it off to him,” Murray noted.  “Once we got up, we went to our iso game and let them come out. I don’t think anybody in 3A can go on Jadyn Collins and D.J. Walker. Nobody.”

“Overall, it was a good team win. We had a balanced scoring attack from a lot of guys. We’re getting contributions from everybody on the team, whether it’s points, rebounds or playing good defense,” said Murray.

Fairfield fell to Franklin, 64-54, last Tuesday and slipped to 3-2 in district with the loss to Crockett.