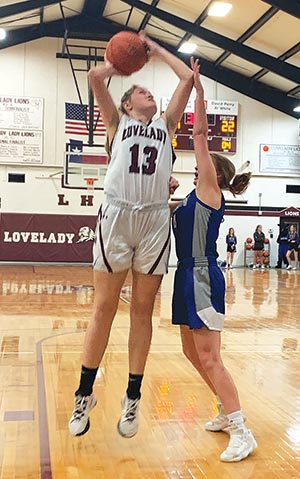 In three district games, the No. 2-ranked Lady Lions have outscored their opponents 204-59.

Lexi Price rang up 12 points in the first quarter and finished with 22 points, including a pair of treys.

Aaliyah Jones, who drained three 3s, tossed in 15 and Mihyia Davis rounded out double figures with 10

Chelsea Butler and Shyanne Pipkin chipped in 4 apiece while Jada Johnson and Shelby Pugh each added 3.

Lovelady resumes district play on Tuesday Jan. 4 on the road against Leon. Centerville comes to town on Jan. 7.

The Lady Lions won their opener over Shelbyville, 61-40 and handled Chireno, 63-39, later in the day to advance to the semi-final on Tuesday.