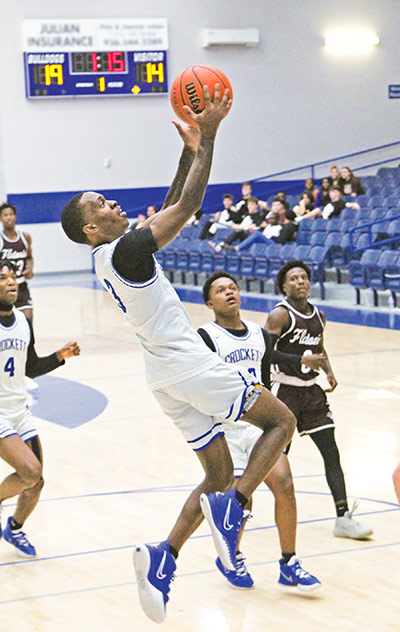 Crockett's Tayshawn Simon glides to the basket against Flatonia on the first day of the Houston County Holiday Classic. (LARRY LAMB|HCC)By Larry Lamb
This email address is being protected from spambots. You need JavaScript enabled to view it.

The Crockett Bulldogs (10-3) came into Tuesday's game ranked No. 7 in class 3A while the Flatonia Bulldogs rode into town boasting a 16-1 record and a No. 5 ranking in class 2A.

Coach Drae Murray's crew prevailed 70-65 in a hard-fought battle on their home court in the Andrew J. Hopkins Activity Center.

Crockett led 24-16 after a quarter but was outscored by 10 in the second quarter as Flatonia slipped in front, 39-37, at halftime. The men in blue regained the lead in the third quarter, 55-50, and fended off Flatonia down the stretch to secure the victory.

A foursome of double-digit scorers fueled Crockett's offense. D.J. Walker pumped in 10 points in the first quarter and finished with a team-high 18 that included a pair of treys.

Courtney Byrd canned 13 and Tayshawn Simon, who drained a pair of treys, booked 12 while Jadyn Collins tossed in 11.

Keshun Easterling was close behind with 8, Jaroderick Holmes tossed in 4, Iverson Rischer 2 and Bre'dron Tucker had 2.

Two other Houston County teams are competing in this year's tournament.

The Lovelady Lions lost their tourney opener against class 4A Hudson, 50-30, Tuesday morning in The Hop.

Tournament co-host Grapeland fell to class 4A Rusk, 77-74, on the Sandies' home court.

The 18-team tournament concludes Thursday with the Gold and Silver Bracket games slated in Crockett.