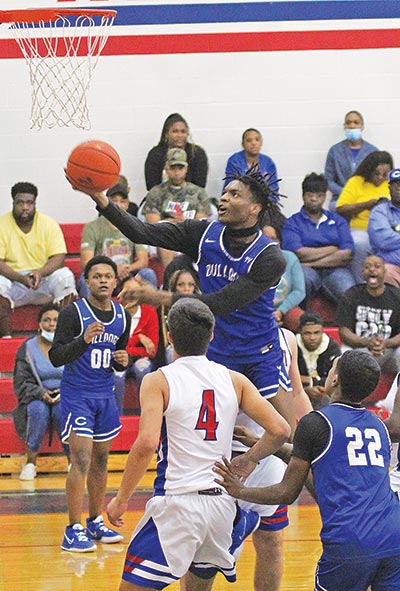 Crockett's D.J. Walker goes airborne on his way to a layup in the district opener against Elkhart on Friday. Walker led the scoring with 19 points. (LARRY LAMB|HCC)By Larry Lamb
This email address is being protected from spambots. You need JavaScript enabled to view it.

ELKHART – Crockett Bulldogs shook off a sluggish start to win their district opener 81-51 over the Elkhart Elks last Friday.

The upset-minded Elks led 15-13 after a quarter but watched their lead slip away in the second quarter as Crockett staged a 17-4 run to pull away 30-19.

After Elkhart answered with a 7-0 run to get within four with 1:45 left in the half, the Bulldogs rattled off a 10-0 run before halftime.

Jarodrick Holmes drained a trey with :25 left in the half and Jadyn Collins heaved in a buzzer-beater three to push Crockett’s lead to 40-26 at the break.

The No. 7-ranked Bulldogs came out of the locker room breathing fire and opened up their biggest lead, 55-31, with 4:20 left in the third and carried a 68-37 advantage into the final period.

“I don’t know it that’s a good thing, but that’s kind of who we are,” said Bulldog head coach Drae Murray in reference to his team’s second half sizzle after getting a sluggish start. “We’re a better third quarter team. I guess it takes me going into the locker room and raising my voice at them a little bit at halftime. They respond to it, but I told them we’ve got to get off to a better start. That’s one thing we’ve been working on. I don’t know if we need to switch up the routine, the warm-up or something else, but we’re not a good first quarter team and that’s not good.”

The Bulldogs have shown random flashes of their offensive potential, but Murray is still waiting for a dominating performance from tipoff to the final buzzer.

“We haven’t put together a full 32 minutes yet, but we showed in spurts tonight how good we can be once we all dial in, lock in and play on the same page,” he said.

Top scorer D. J. Walker canned 10 points in the pivotal third quarter and finished the night with 19, including a pair of treys

Tayshawn Simon and Keshun Easterling canned 13 apiece and Holmes, who also drained a pair of threes, rounded out double figures with 10.

“We had a lot of guys that gave us sparks tonight. It was just an overall great team effort,” said Murray.

Both teams shot well at the charity stripe. The Bulldogs hit 8 of 9 while the Elks made 10 of 13.

For Elkhart, Cale Starr led a foursome of double-digit scorers with 14. Jayden Chapman  had 11, while Wyett Thomas and Tyler Stafford scored 10 each.

“I didn’t really know a lot about Elkhart coming in, but their coach is one of my good buddies and he’s got them playing the right way. I know they play hard, they’re getting better and they defend the ball really well. The way we were able to score on them is surprising. I know he wants to keep the game low-scoring, so that shows how good we can be offensively. A lot has to do with our offense, but they’re young and they’re going to get better,” said Murray.

The Bulldogs warmed up for their district opener against the Aggieland Home School Panthers and won 54-44 over the highly ranked freelance team.

The Panthers, ranked No. 13 in the state among freelance teams, will compete in this year’s Houston County Hoops Classic Dec. 28-30.

After halftime, Aggieland drained a trey to make it a two-point game before Crockett took control and dominated the rest of the quarter to pull away 49-30 lead.

Seizing  momentum in the final period, Aggieland outscored the Bulldogs 14-5.

The Bulldogs gained some breathing room with two straight buckets – one a three-pointer – for a 14-point lead.

Holmes was the only Crockett scorer reaching double figures with 15 points, including one trey.

Collins and Easterling each had 8, followed by Byrd and Walker with 7 apiece, Simon 4, Tucker 3 and Rischer 2.

Aggieland was led by junior Kaven Rollo, who drained four treys and finished with 14. Rollo’s father, Jeffrey Rollo of Lovelady, is athletic director and head basketball coach for both boys and girls.

Sam Cunningham also tossed in 13 for the Panthers.

After next week’s tournament, the Bulldogs resume district play Jan. 4 on the road against Groesbeck and host Buffalo on Jan. 7.