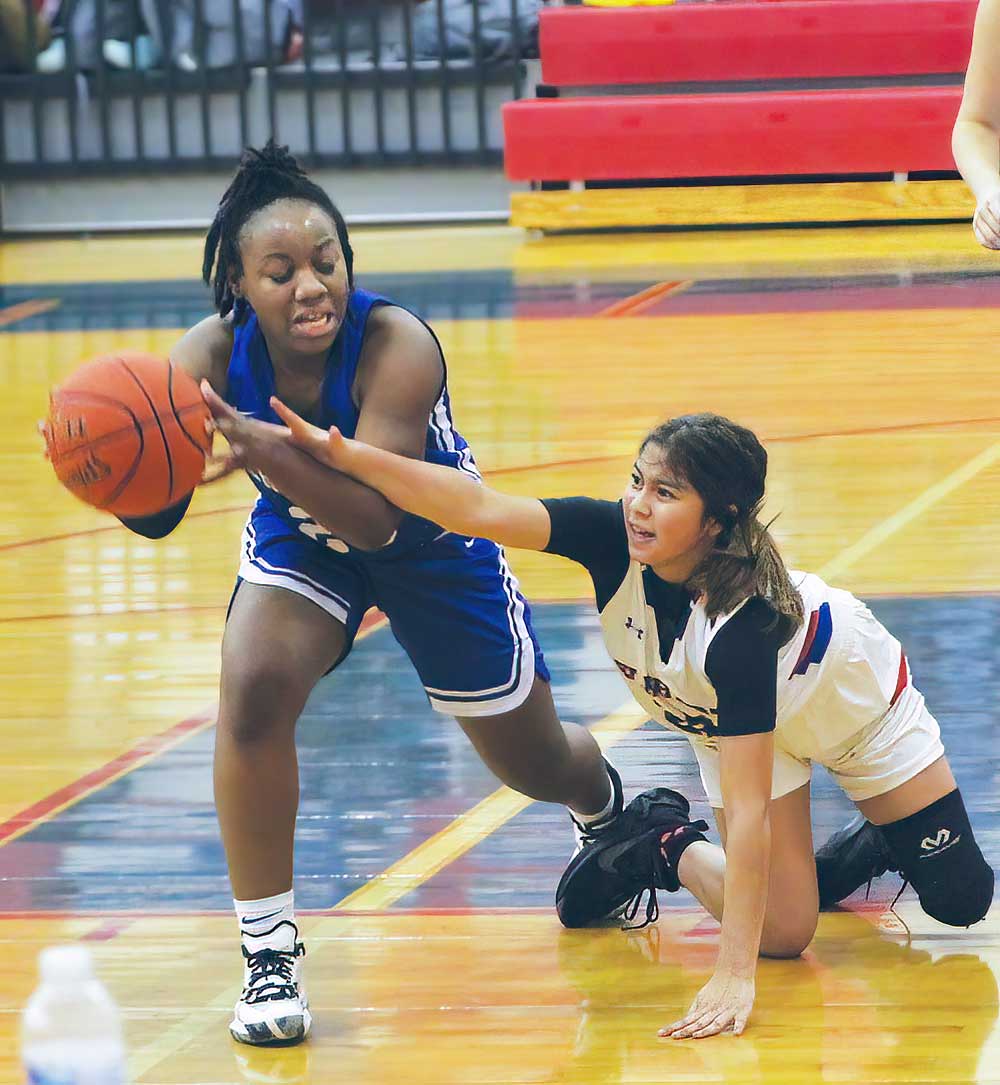 ELKHART --After dropping a district home game to Franklin last Tuesday, the Crockett Lady Bulldogs knocked off Elkhart, 59-27, on the road Friday night.

In a low-scoring third quarter, the Lady Bulldogs outscored their hosts 8-4 for a 43-22 lead and put the game away with a 16-5 run in the fourth.

Tacorra Johnson, Crockett’s only double-digit scorer, booked 14 in the first half and finished with 16.

A’Nayah Wooten and Chelsea Walker each tossed in 9, Tania Davis had 8 and La’Kyriah Hamilton had 7.

Other scorers were Keaton Crabtree with 4, Stasia Parker with 3, Ty’Shonda Bell with 2 and Ty’Reyanna Beasley with 1.

Crockett and Elkhart both came into the game looking for their first district win.

“We knew it was going to be rough playing here. It always is. I’ve been preaching all week that you can’t underestimate a team like Elkhart. You have to play hard, do your job and work on things we need to work on. We had mental mistakes at times when we couldn’t afford them, we had turnovers when we shouldn't have  and took some bad shots a couple of times,” said coach TaNesiah Johnson.

One player fouled out and four others – all starters -- were in foul trouble.

Expressing concern about her team’s high number of fouls, Johnson said, “We’ve got to nip our fouling. I’m averaging  one or two foul-outs every game. Girls are more hands-on, but we’ve got to learn to move our feet and just play. We got in foul trouble and that hurt us.”

“When we play a team like Franklin, Teague or Groesbeck we can’t afford that,” said Johnson. “We need to work on cutting down on fouls so that we’ll be ready when we play those teams.”

Coach Johnson added, “Besides this being a tough place to play, we had early release today at noon. We all stayed together and had a little Christmas team party and de-stressed while we were waiting. We got the job done, but we have a lot that we need to work on.”

With a comfortable lead in the fourth quarter, Johnson was able to give her bench some playing time.

“I kept an eye on the scoreboard, though. I told the girls that in basketball it doesn’t matter how far you’re down, you can get back in it quickly,” the coach said. “I let everybody get involved. We did what we had to do and we got the W.”

The Lady Dogs gave Franklin a run their money, leading the visitors 12-10 after a quarter. Crockett opened up a six-point lead early in the second but fell behind 29-28 at the half.

“I thought we had them where we wanted them at halftime,” said Johnson.

After the Lady Dogs made it a two-point game with 3:00 left in the third, Franklin opened up a nine-point lead, 47-38, with a minute left in the quarter. A running jumper by Tacorra Johnson and a free throw closed the gap to 47-41 after three.

Crockett would get no closer. It was still an eight-point game with three minutes left, but two straight buckets gave Franklin a 59-47 lead with 2:10 left.

“We just missed too many easy shots, including a missed layup on our first possession of the game. We missed layup after layup that we should have made,” said coach Johnson, who noted only two players scored in double figures.

Johnson, who hit Crockett’s only trey, led with 16 and Wooten was right behind with 15.

Hamilton and Davis each chipped in 7, followed by Walker with 3, Crabtree 2 and Beasley with 1.

Franklin picked up almost half of its points on 11 three-pointers, including five by Riley Hood, who finished with 15 points. Riley Caldwell led all scorers with 17.

“You look at their side of the book and every player but one scored,” pointed out Johnson.

“Free throw-wise we did what we were supposed to do, but Franklin just killed us on the boards,” said Johnson.

“Rebounding is where we struggled. They out-rebounded us and that hurt us big-time. They literally scored half of their points on second-chance shots. We’ve just got to come ready to play every game and get the job done. We worked on what we needed to do, but we didn’t execute.”

Another bright spot was that the Lady Dogs only had 10 turnovers in the second half. “That’s an accomplishment, but we didn’t do the little things like blocking out. We just didn’t play smart,” she said.

Before resuming their district schedule, the Lady Bulldogs will host Shepherd on Tuesday, Dec. 28 in the old high school gym due to the boys tourney being held.

The Lady Dogs travel to Groesbeck on Jan. 4 for their fourth district game.