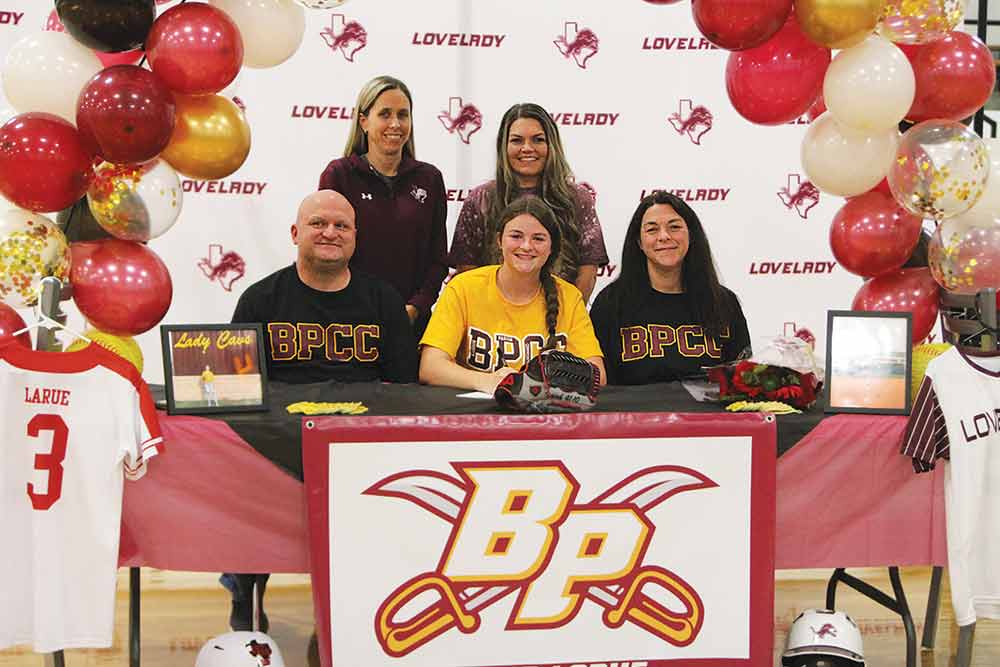 LOVELADY -- Macie La-Rue still has her senior softball season ahead of her, but the Lovelady High School athlete has already finalized her college plans.

LaRue signed a letter of intent with Bossier Parrish Community College during a ceremony last Wednesday in the LHS gym.

BPCC is a NJCAA Division I program located in Bossier City, La.

"Macie's best attribution to the team is that she works harder than anybody 100 percent of the time. Every weekend when I come to the field to work on it or I'm driving by, she is constantly doing extra. She's always staying after practice. Even after our last playoff game this past season we played into June and the next day she went to select ball practice," said Hester. "She's just constantly trying to get better and she wants to always learn. She's a forever learner and that's going to be why she'll be so successful in college. Just because of how hard she works."

She started playing on the Lady Lions varsity as a freshman and has earned Academic All-District honors each year.

She also received second team all-district honors as a freshman but did not have a chance to demonstrate her prowess as a sophomore when the season was cancelled due to the pandemic.

She made up for it her junior season, earning District Co-Pitcher of the Year honors along with teammate MiMi Sandoval. She also received honorable mention from the Texas Sports Writers as a pitcher last year.

LaRue’s advice for other aspiring college-level players is, “Keep at it. Don’t let other people determine your outcome.”

LaRue plans on majoring in business, but hasn’t settled on a specific career goal.

Hester has watched LaRue progress over the past four seasons, the last three as the Lady Lions’ head coach.

“The way that she has improved between her freshman year to her senior year has been crazy to watch,” said Hester. “She is so talented and she’s only gotten better. I can’t wait to see how well she does in college.”

“She’ll play close by when they’re on the road and I can’t wait to see her. She’s going to be super successful and as much as she’s progressed the last four years I can’t imagine how much she’s going to progress over the next two,” said Hester.

The Lady Cavaliers finished the 2021 season with a 46-8 overall record, which was the most wins in program history, and a 23-1 conference record. They captured first in Region XIV East Division. BPCC was ranked as high as No. 8 in NJCAA DI, which equaled the program’s highest ranking.

LaRue is the second Lovelady softball player to  sign with a college this year.  Senior Mihyia Davis recently signed with the University of Louisiana - Lafayette.