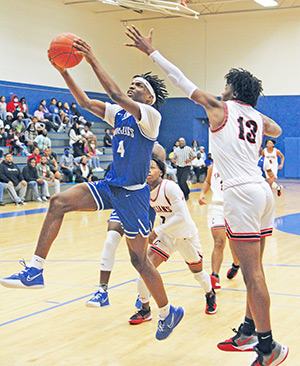 MADISONVILLE -- The Crockett Bulldogs won their first three games in the Madisonville Classic Invitational before hitting an obstacle in the Gold Bracket Championship Game on Saturday afternoon.

After knocking off Grapeland, Anderson-Shiro and New Waverly, the Bulldogs fell to the class 4A Madisonville Mustangs, 59-46, to finish as runner-up in the 12-team tournament.

Crockett entered the tournament ranked No. 17 in the class 3A TABC state poll and zoomed to No. 7 this week after an impressive showing. Madisonville (8-0) is ranked No. 25 in class 4A.

Against Madisonville, the Bulldogs found themselves in an early 10-0 hole. After a time-out, Jadyn Collins drained a trey to finally stop the bleeding almost seven minutes into the game.

"I don't like to use a time-out early, but I had to use one today because Madisonville came out and punched us in the mouth early. Madisonville did what every team wants to do when you're playing on your home court. That's what I always preach to our guys. Throw the first punch and let the other teams know that you're here to play aggressive the whole game. Madisonville did a great job of doing that. Kudos to them. You've got to tip your hat to them, but we get another shot at them in a few days," said Bulldog head coach Drae Murray, whose crew travelled back to Madisonville for a rematch on Tuesday.

The Bulldogs trailed the Mustangs 19-10 after a quarter and 34-24 at the break. Crockett got within five, 42-37, early in the fourth and it was still an eight-point game midway through the quarter until Madisonville scored four unanswered baskets to pull away 56-40 with 3:00 left.

Crockett advanced to the championship game by toppling No. 4-ranked New Waverly, 64-46, on Friday.

"I think our guys were still on that high horse after knocking off New Waverly yesterday and underestimated how good, physical and fast Madisonville would be today," said Murray. "I told the guys that when you host a tournament, you want to win it. That's what Madisonville showed today. They were just more physical and faster than us from the get-go. That's all it was."

Murray continued, "We needed to see a bigger, physical team to get us re-focused. Sometimes when you're coming off a big win like we had against New Waverly, it comes down to how you handle success. Right now, it some seems we don't handle success well."

Walker, who pumped in 27 points and 8 rebounds in Friday’s game against New Waverly, played in the championship game despite being “banged up.”

“He played, but he wasn’t himself. He’s one of those guys that we count on to score and he averages eight rebounds a game. You could see we need those eight rebounds  from him against Madisonville,” said Murray.

The Bulldogs had their hands full with Grapeland in their first pool game but prevailed 59-55. Grapeland, ranked No. 18 in last week’s TABC class 2A state poll, has moved up to No. 11 this week.

“We started out with a tough one against Grapeland. We trailed pretty much the whole game but our guys showed a lot of grit and fought back to win it,” said Murray.

Walker led with 16 points, Collins  had 12 and Easterling 10, all in the second half. Courtney Byrd booked 9 points and 8 rebounds.

The Bulldogs beat Anderson-Shiro 60-54 in pool play Thursday to advance to the Gold Bracket. “We got off to a slow start but we were able to pull through. It was good to  win a game when we weren’t playing very well,” said Murray.

Against Anderson-Shiro, Collins tossed in 22 points and 6 rebounds to lead the Bulldogs.

Crockett’s varsity boys team is idle Friday while the junior varsity competes in a tourney at Palestine. Both squads host Aggieland Homeschool next Tuesday and then open district play on Friday, Dec. 17 at Elkhart.