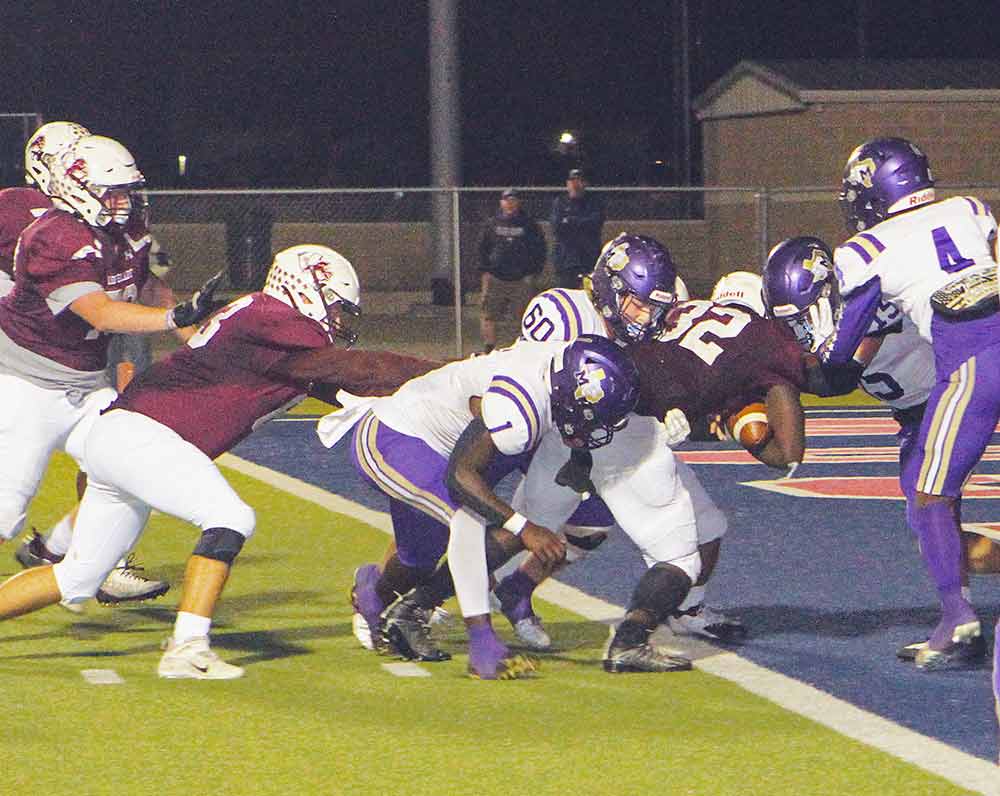 Lovelady's Shaun Easterling (32) powers his way into the end zone for a fourth-quarter touchdown against top-ranked Mart in the area round Friday night. (LAWANNA MONK Photo HCC)

MADISONVILLE – Lovelady's football season ended with a 42-16 loss to undefeated, top-ranked Mart in the area round Friday night at Mustang Stadium.

Using a ball-control strategy, the Lions were able to keep the ball out of Mart's hands early and hold the Panthers scoreless in the first quarter. Mart, which only had four snaps in the opening period, eventually scored in the second to take a 14-0 halftime lead.

After Mart stretched its lead to 28-0 in the third, the Lions made it 28-16 midway through the fourth quarter. The Panthers added another TD with 1:30 left in the game.

Wortham, a 38-22 area round winner over West Sabine, finished fourth in its district and beat Maud, 45-36, in bi-district.

The Lions started their first possession with good field position after Keivon Skinner returned Mart's kickoff 12 yards to the Lion 27. Three straight carries by Shaun Easterling moved the Lions across midfield to the Mart 40 before they turned the ball over on a fumble at the 38.

Lovelady's defense struck HARD and forced the Panthers to punt on a three-and-out series. Connor Martinez shut down the first two plays for losses and on third down the Panther running back was chased out of bounds, bringing up a punting situation on fourth-and-11.

The Lions started their second series at the 30 after another good return by K. Skinner. Quarterback Slade Murray guided his team in a drive that reached the Panther 11 before falling just short of the first down marker. Murray, Easterling and Martinez all contributed yardage behind great blocking by the rest of the team.

Mart only had four snaps in the first quarter as a result of Lovelady's ball control strategy that kept the Panther offense on the sidelines.

The Panthers finally got on the scoreboard early in the second quarter after intercepting a pass at their own 20. Quarterback Trey Powell capped the seven-play drive on 34-yard run and the PAT put Mart up 7-0 with 8:06 on the clock.

In the second quarter Mart's offense took over on downs, but the Lion defense stepped up to force a punt. After Skylar Pipkin recorded a 3-yard TFL on the first play, pressure by Dayvian Skinner forced an incomplete pass. Skinner allowed a 7-yard gain on a third-down pass, forcing a Mart pass that rolled dead at the Lion 44.

The Lions made their way deep into Panther territory before turning the ball over on downs at the Mart 26. Murray handed off to Easterling and Martinez, who kept the ball moving until the Panther defense finally dug in its heels with a fourth down stop.

The Panthers took over and drove 74 yards down the field to score on a 26-yard pass from Powell to Brandon Lundy with 1:05 left in the half. The PAT made it 14-0.

Murray was injured playing defense in the second quarter and was sidelined the rest of the game.

Mart struck for two touchdowns in the third quarter to go up 28-0.

The Panthers returned K. Skinner's second half kick 13 yards to the 38 and scored nine plays later on a 4-yard run by Powell with 10:34 in the third.

After returning a punt by Pipkin to the Lion 40, Mart scored three plays later on a 21-yard run by the quarterback with 8:13 to go in the third quarter.

Late in the third, the Lions turned the ball over on downs at the Panther 2 yard line and kept the Panthers pinned back. After Brandon Fry set the Panthers back at the 1 on first down, Mart completed a pass out to the 6, where Fry and Gilchrist made the tackle on the final play of the quarter.

On the first play of the fourth quarter, Martinez and McFarland sacked the quarterback in the end zone for a safety to make it 28-2.

After giving up the safety, Mart kicked off the 20 and K. Skinner returned it to the Lion 45. Two plays later the Lions were in the end zone after D. Skinner reeled off a 52-yard run to the 3 yard line. Easterling, who took the reins as quarterback after Murray's injury, scored on the next play to make it 28-8 with 11:10 left in the game. A 2-point conversion failed.

After Gilchrist recovered a Mart fumble at the 3 yard line and the Lions drove the length of the field to make it a two-touchdown game.

An onside kick by McFarland was fielded by Mart it its 48-yard line and the Panthers scored six plays later. Robert Hickman gave the Panthers some breathing room on a 25-yard run and the extra point made it 35-16 with 4:22 left.

Mart's final score came with 1:30 left after a defensive stand at the Lion 30. The Panthers scored on their first play and kicked the extra point.

This was the final game for 11 Lovelady seniors who have been a great part of Lion Pride during their careers. The senior crew consisted of Slade Murray (7), Keivon Skinner (9), Joshua Gilchrease (11), Connor Martinez (13), Scotty Moore (17), Caleb Gilchrist (31), Shamar Terry, who missed much of his senior season due to injury, Aiden Moore (63), Matthew McFarland (70), Peyton Harrison (72) and Jayden Gutierrez (83).