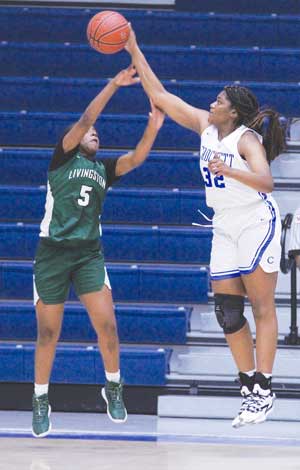 Crockett's Tacorra Johnson (32) swats the ball away from a Livingston shooter during the Lady Dogs Thanksgiving Classic Saturday in The Hop. (LARRY LAMB HCCROCKETT -- The Crockett Lady Bulldogs hosted their 7th annual Thanksgiving Basketball Classic last Thursday, Friday and Saturday with 13 teams ranging from class 2A through 5A competing for this year's title.

Each team played five games over three days in both The Hop and the CHS gym. The tournament tipped off at 8 a.m. Thursday and wrapped up Saturday with the final matchup at 2:30 p.m.

Crockett only notched one tournament win, but coach TaNesiah Johnson knows the experience is going to pay off when her team starts district in less than two weeks.

"We aren't scared to play any of those teams. In order to be successful and improve, you must play various talent levels. It was really good basketball over the past three days," said Johnson.

The Lady Dogs opened the tourney with a 59-26 loss to Normangee on Thursday. Junior forward Tacorra Johnson led the scoring with 12 points.

Later that evening, the Lady Dogs took on former district rival Coldspring and prevailed 56-50 in a nail-biter. Johnson and freshman Tania Davis each pumped in 17 to lead the way.

Back in action Friday, the Lady Dogs faced off with Pineywoods Academy, a team they had beaten 50-44 in their season opener. The Lady Wolves didn't back down and took the win 51-45 despite a 20-point effort by Johnson.

Crockett's other two losses were against a pair of 4A squads.

In their next game Friday, 4A Madisonville edged the Lady Dogs 42-32. Senior Keaton Crabtree led Crockett with 10 points.

Rounding out tourney action Saturday, 4A Livingston held all of Crockett's scorers to single digits to beat the tournament hosts 51-22.

"I sound like a broken record, but we must have at least two to three players in double figures. We are bigger than other teams we face, but we must also play big. Although we defend tremendously on our big girl, still others must step up and play their role as well. We must find a way and find a way soon," said Johnson, whose team plays its district opener Dec. 7 at Teague.

"I feel strongly that we have a chance to finish in the top four in our district but we must show that on the court," stressed Johnson.

Before starting the Thanksgiving break, the Lady Bulldogs hosted Pollok Central on Monday and travelled to Douglass on Tuesday. "We'll practice Wednesday and use the remainder of the week to rest and recover," said Johnson.

The Lady Dogs return to action Tuesday, Nov. 30 with a home game against New Waverly. They wrap up their non-district slate at Mexia on Dec. 3.

See Page 2B for a recap of the Lady Bulldogs' first four games of the season.