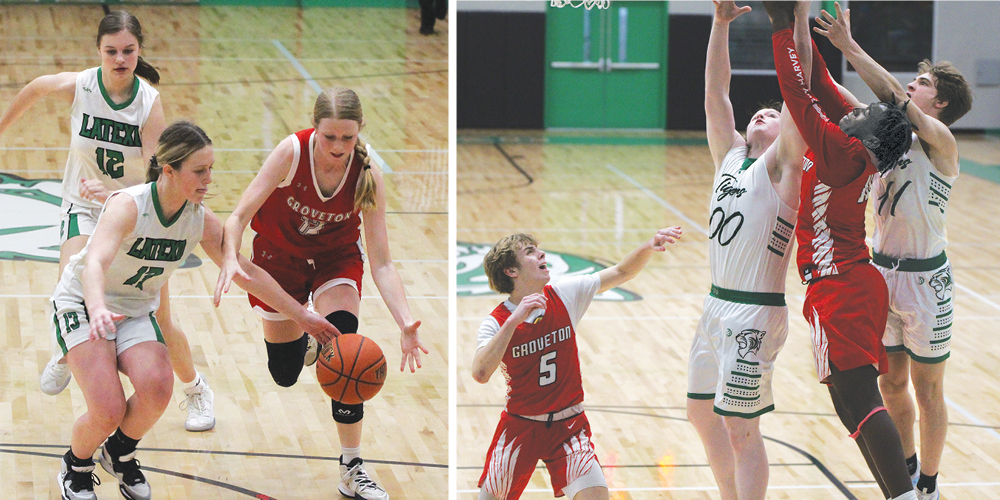 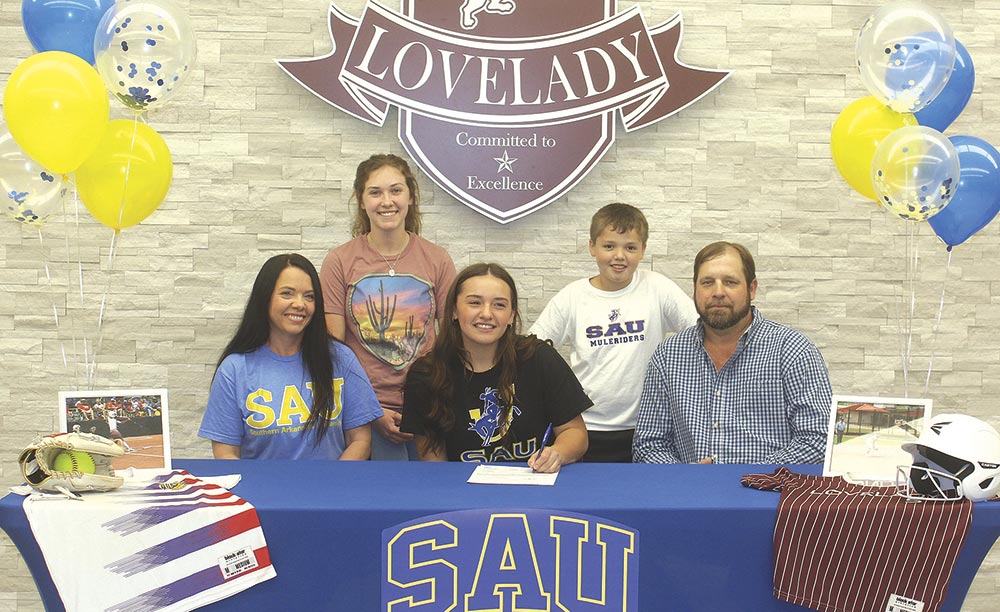 Lovelady first baseman Haven Prager is joined by family members as she signs a national letter of intent to play softball at Southern Arkansas University in Magnolia, Ark. Pictured with the future SAU Mulerider are (front) Julie Prager and Roan Prager and (back) Jordan Davenport and Rider Prager. Photo by Larry Lamb

LOVELADY — Senior Haven Prager will play her final softball game in a Lovelady uniform this spring and begin a new chapter in her career as a member of the Southern Arkansas University Muleriders softball team.

Prager made her college decision official during a signing ceremony Wednesday, Jan. 18 in the high school library.

Prager has played first base for the Lady Lions but will also see duty as an outfielder for the Muleriders.
SAU, located in Magnolia, Ark., is an ideal fit for Prager.

“Right behind the field is a pasture and cows, so I really felt at home. The whole campus has been updated recently and it’s super nice. The coach is very nice and amazing. He answered all my questions before I could ask them. I really loved the atmosphere,” Prager said.

She won’t be the only Lovelady alumnus on campus, though. Discus thrower Kylie Pugh recently signed with SAU’s women’s track and field team.

Prager, a four-year varsity player, said the highlight of her career was being part of the history-making 2022 team that brought home the UIL Class 2A state runner-up trophy from Austin.

The Lady Lions were the first softball team in school history to reach the Final Four and set another precedent by playing in the championship game.

The Lovelady mayor issued a proclamation and presented the Lady Lions the keys to the city. “That was so much fun. It was such an awesome experience,” said Prager.

She was selected Texas Sports Writers Association All-State first baseman her junior season and has been an all-district first team performer every year.

Prager started sizzling at the plate last year just as the Lady Lions were beginning their playoff run.

“I hit my first homerun of the season in the game before the playoffs, so I was kind of feeling down. But after that every playoff game was so much fun. All of us were doing good and I was cranking them over the fence every game during the playoffs,” she said.

But it was small ball – a sacrifice bunt by Prager – that sealed a 1-0 semifinal victory over Stamford and sent the Lady Lions to the state championship game.

“Those playoff games are my most memorable,” she said.

The Lady Lions, who experienced significant senior losses on their roster, started practice for the 2023 season on Friday, Jan. 13.

"We’re kind of starting over. We have a lot of younger girls, so I definitely want to offer my experience and help everybody learn. Our goal is to build it back up,” she said.

Prager plans to major in kinesiology and pursue a career in pediatric physical therapy.

Lady Lions head coach Peyton Hoffman said, “Haven is like Scout. She plays a million miles an hour. She’s kind of an inside-out hitter and likes to hit the ball in the gap. She has a really good glove. She is real versatile, a good base runner and a smart player."

Recalling how Prager stepped up last season, Hoffman said, “When we got late in district and the start of the playoffs she got hot offensively and went on a tear. She was putting the ball out of the ballpark regularly."

"She was a big part of our run to the championship game. She laid down the sacrifice bunt in the semifinal game to drive in the run that was the difference in the game,” Hoffman continued.

"Haven is a great kid and I wish she was going to be with us a little longer. She’s going to help Southern Arkansas out tremendously. She’ll be a good addition to their program." 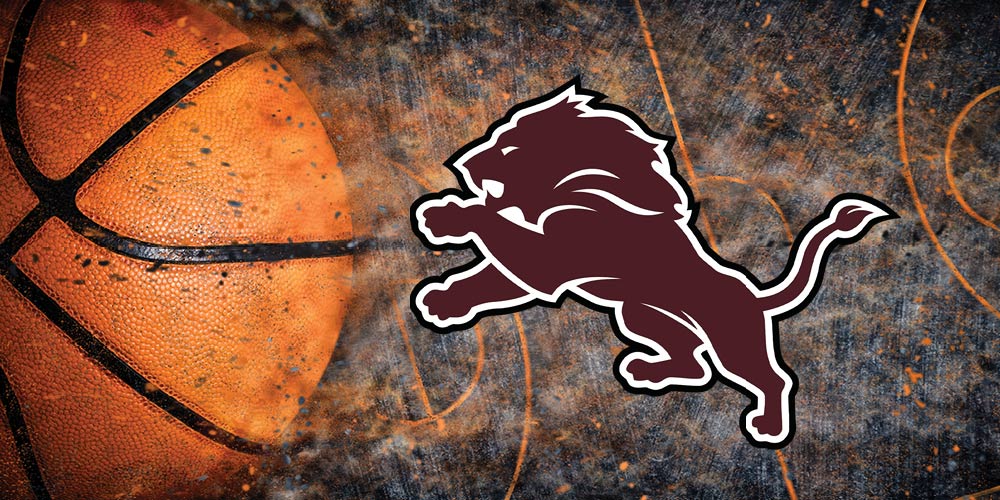 LOVELADY – It was business as usual for the Lovelady varsity girls basketball team last week.

The Lady Lions closed out the first half of district Friday with a 67-21 home win after hammering Grapeland 80-19 on the road Tuesday.

The Lady Lions, 5-0 in district, played Latexo on Tuesday and will host Groveton on Friday. Next Tuesday, they travel to Leon.

Lovelady held both Grapeland and Centerville to single digit scoring in every quarter.

Lexi Price poured in 28 points, grabbed 8 rebounds and dished out 5 assists. She also had a team-high 6 steals.

Kylie Pugh recorded a double-double with 10 points and 10 rebounds along with 2 assists.

Scoring 8 apiece were Shelby Pugh with 8 rebounds and 4 steals; Diara Woods with 7 rebounds and Jayda Sherman with 3 steals.

Haley Shupak booked 5 points and 3 rebounds while Haley Davidson and Addi Carney both had 4 points and 5 rebounds.

Davidson had 3 assists and Carney had 5 steals.

Against Centerville, the Lady Lions jumped out to a 21-3 lead and stretched it to 38-6 at the break. They outscored the visitors 29-15 in the second half.

Price earned a double-double with 25 points and 11 steals, along with booking 8 rebounds and 7 assists.

Jones was next with 17 points, 5 rebounds, 2 steals. Shelby Pugh had 11 points and 6 rebounds

Kylie Pugh made her presence felt on the boards for the second straight game with 10 rebounds in addition to her 4 points and 3 steals.

Shupak and Woods each had 3 points and 3 rebounds. Shupak had 2 steals and Woods had 2 assists.

Davidson booked 2 points, 2 rebounds, 4 assists and 2 steals while Carney had 2 points and 3 rebounds.