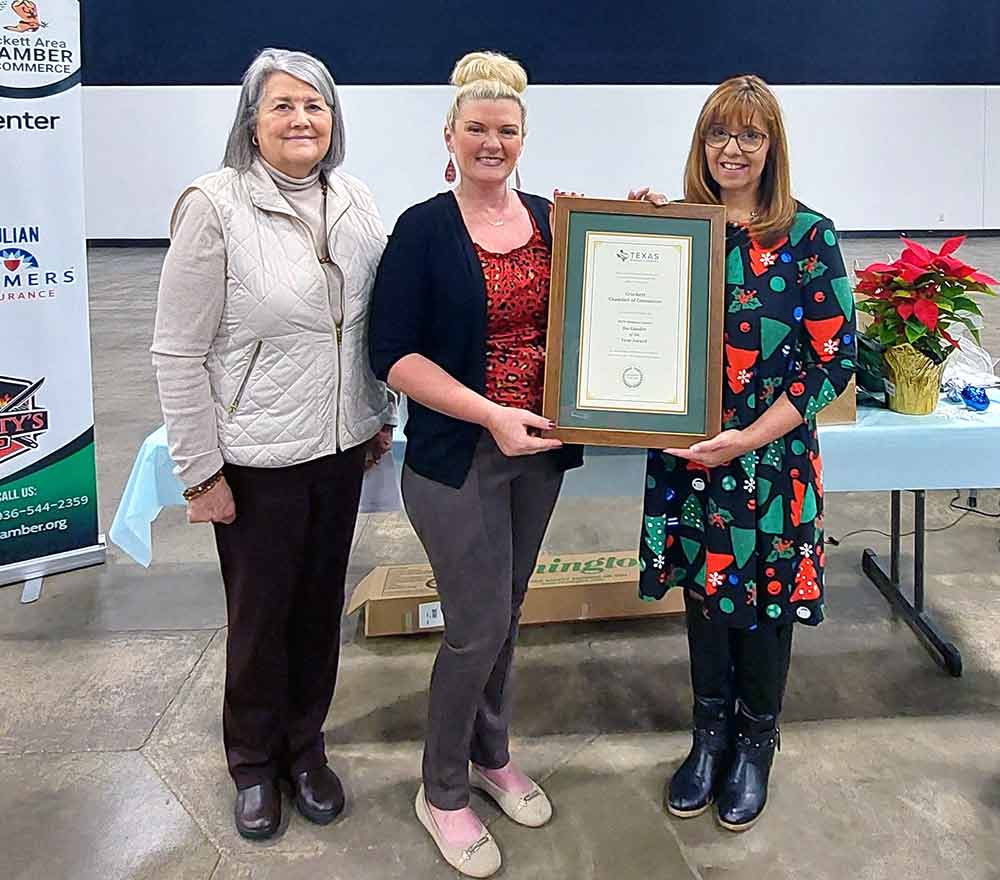 CROCKETT – On Wednesday, Dec. 1, the Crockett Area Chamber of Commerce met for their quarterly meeting at the Civic Center.

While members enjoyed a delicious lunch catered by Evans Cajun Café, awards were given to individuals for their community service and assistance with the Chamber.

Bonita Carpenter was awarded Ambassador of the Quarter, and Member of the Quarter went to Eastgate Family Church. Texas Forest Country Partnership (TFCP) recognized the Crockett Area Chamber with the ‘Do Good-er” award. TFCP is an economic development organization. The award was given for the Chamber’s promotion of small businesses during the height of the pandemic in 2020. 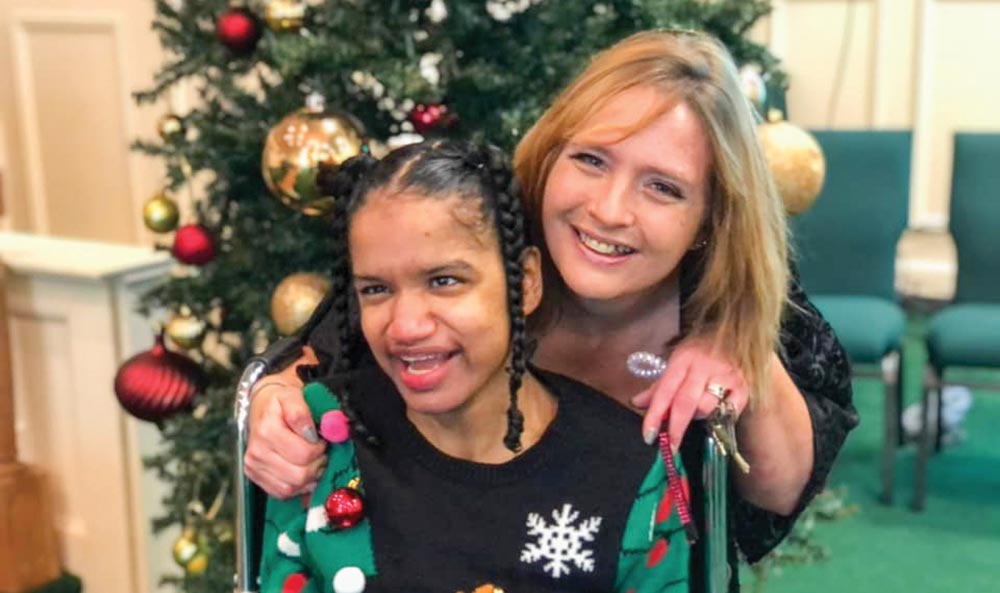 CROCKETT – On Saturday, December 11, Good Shepherd Fellowship Church will host the 2nd Annual Ciera and Friends Drive-Thru Christmas Celebration. The event will be held at noon at 401 South 7th Street in Crockett. What sets this event apart is that it is specifically for children and young adults in Houston County with special needs or challenges.

The inspiration for the parade is Ciera Dennis. Ciera is the twenty-one-year-old daughter of Wendy Dennis. Pastor Leon Wallace met Ciera and Wendy at the Standing With Crockett table at Good Shepherd Fellowship Church.

Although Ciera is non-verbal, the first thing he noticed about her was her killer smile. When the idea began to form to have a Christmas celebration for those with special needs, Pastor Leon asked if Ciera could be his special friend for the event. He named it Ciera and Friends Drive-Thru Christmas. Last year, 51 friends attended, ranging in age from one to 47.

As vehicles drive the route they are greeted by popular children’s characters, such as Disney Princesses, superheroes like Batman, Captain America, Spider-Man and Christmas favorites like The Grinch and Santa Claus. The characters hand out gifts to the special friends and gift bags for siblings who are also in the car.

This year, the Latexo Cheerleaders will be cheering the kids along, and the Leo’s will entertain attendees with Christmas carols. And while the children receive their treats, Pastor Reginald Marshall and the InnerCity Worship Center Church will be handing out fried shrimp and fish plates to the parents who attend.

If you, or someone you know, has a child or young adult who was born with or has developed special needs, please contact Pastor Leon Wallace at Good Shepherd Fellowship with their name and age.

Volunteers are always welcome. If you want to be a part of one of the most wonderful events in Houston County, put on your jolliest Christmas outfit, and join Ciera and Friends as they bring joy to the special needs children in our Community.

CROCKETT – As the year begins to come to a close, the Crockett City Council met on Monday, Dec. 6, to address several outstanding issues. But before they tackled the agenda items, Mayor Ianthia Fisher welcomed guests, then Council members listened as John Jenkins expressed his thoughts over the recent sale of the property on Loop 304 that formerly belonged to the CISD.

The meeting adjourned to Executive Session, reconvening shortly afterward, with members voting not to pursue the litigation that had been discussed. Then they moved on to the monthly police report given by Chief Clayton Smith.

Smith noted a slight rise in calls and arrests, explaining that the department does experience a higher holiday volume between Halloween, Thanksgiving, and Christmas, but that it’s not unusual to see a spike.

In the absence of Fire Chief Jason Frizzell, City Administrator John Angerstein reported that a military surplus truck has been obtained and is being prepped for service as a highwater rescue truck. He also said that the City had received an additional grant of $20,000, which would provide a water skid unit for the department.

Because of the high cost of supplies and the increased use in online purchasing, City Administrator John Angerstein requested an increase in the credit limit of the City Visa card from $5,000 to $10,000. The credit card is used by all three central departments – City, Fire Department, and Police Department. On many occasions, individuals must use their personal credit cards for business-related travel or purchases.

Then the expenses are submitted to the City for reimbursement.

Angerstein explained that the raised credit limit would help alleviate that extra step and also allow the Fire or Police departments to purchase equipment without maxing out the credit card. After a brief discussion, the motion was made and approved to increase the credit limit.

The final agenda item was the approval of an updated City of Crockett Personnel, Policy, and Procedure Manual. City Administrator Angerstein said that in conjunction with attorney Bill Pemberton, the new manual has been revised to eliminate outdated verbiage and conflicting policies. A discussion followed regarding handling grievances, and after questions were satisfied, the Council voted to approve the new manual.

Two outstanding policies that still need to be addressed were compensatory time and tuition reimbursement, which will be voted on and added later. The new policy manual will go into effect on January 1, 2022. 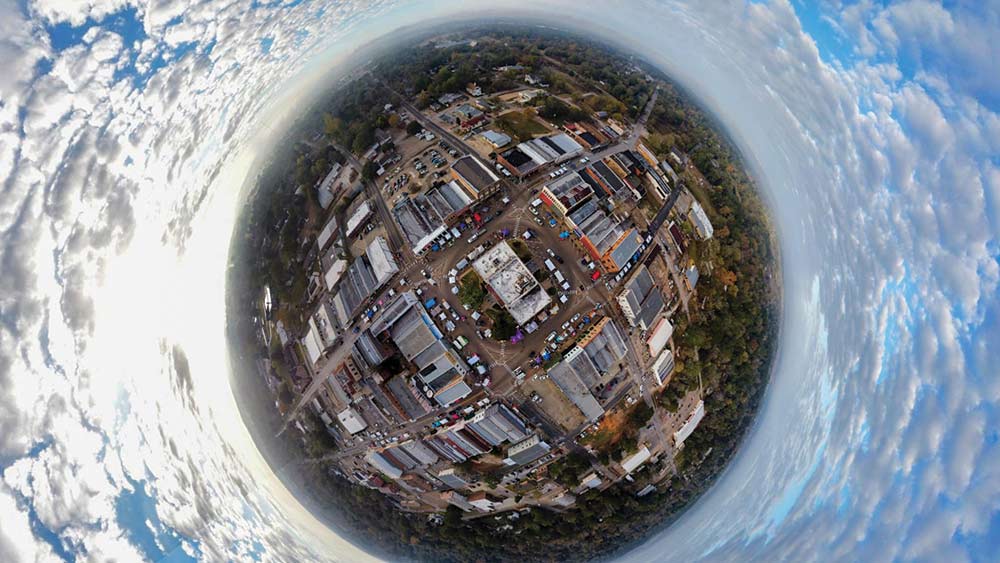 A view from up high –This unique view of the recent downtown Christmas celebration in Crockett was captured via drone by Forehand Studios. Kinda looks like a Christmas ornament, wouldn’t you say?  IMAGE COURTESY OF FOREHAND STUDIOS 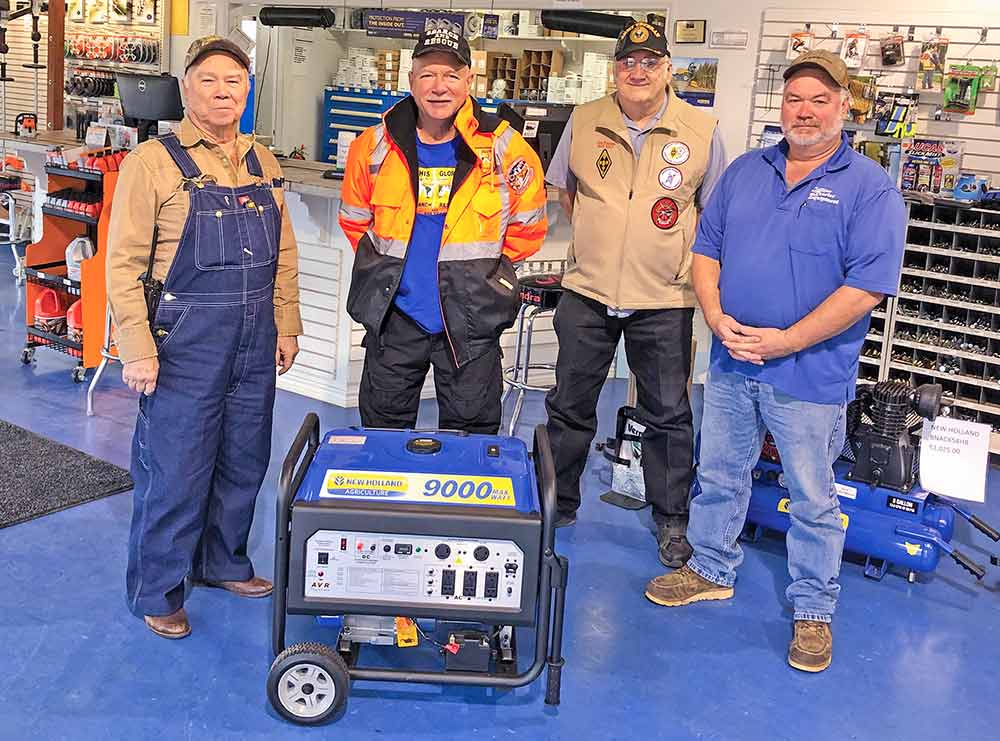 What made this giveaway unique is that the winning ticket was held by Randy Havard, Director of His Glory Search and Rescue of Lufkin. Havard, the purchaser of the ticket, is donating his prize to the search and rescue team.

“This generator will probably be on its way out by the time I get it home,” Havard said, explaining that he had already spoken to a team in South Texas that could use the apparatus.

His Glory Search, Rescue and Aid Team is a Christian-based, non-profit organization that has been in operation for over twenty-three years. It is comprised of volunteers who monitor, prepare for, and respond to disasters in the United States and worldwide. Besides search and rescue, other areas of disaster response include medical aid, resource management, such as providing supplies for communities and other teams, onsite meals for First Responders, and other humanitarian assistance.

The team is looking for volunteers to assist in quick response search and rescue, logistics specialists to help load and unload gear, set up campsites and triage units, and operate ham radio equipment. If you would like to volunteer, or are interested in learning more about the His Glory Search and Rescue ministry, email Randy Havard at This email address is being protected from spambots. You need JavaScript enabled to view it. or call (409) 201-6512.