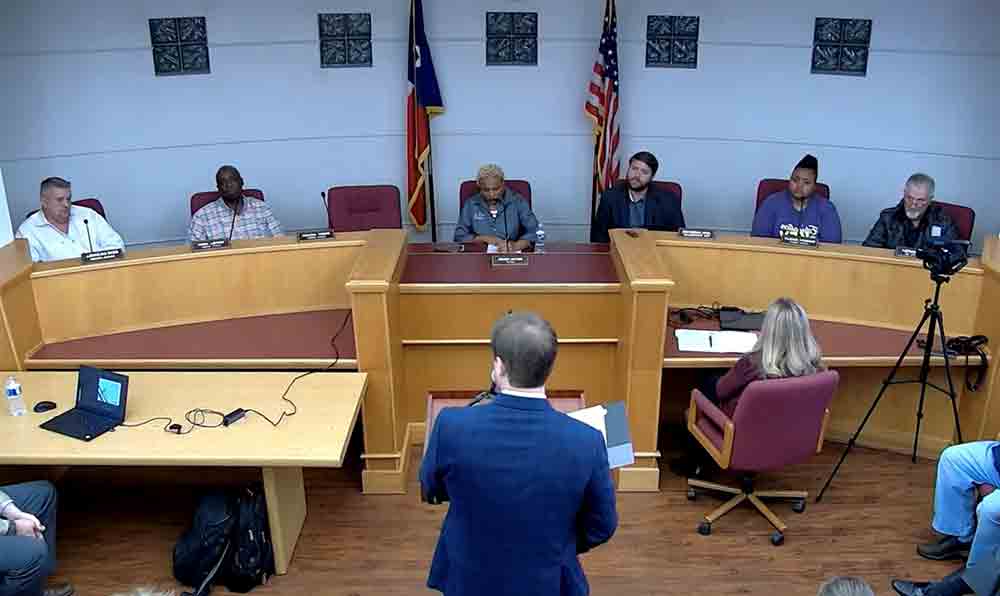 Travis J. Casner presents an audit of the CEIDC to the Crockett City Council. Courtesy photo

CROCKETT – After reconvening following an executive session, Mayor Pro Tem Mike Marsh made the motion to temporarily suspend all activities of the Crockett Economic and Development Corporation (CEIDC) until an investigation can be conducted by Police Chief Clayton Smith. The motion came after the findings of a forensic audit of the CEIDC were presented during the City Council meeting held on January 9.

Pressured by constituents who questioned decisions and transactions made by the CEIDC, the council voted during its June 21 meeting to hire a forensic auditor to review financial and transaction decisions going back as far as twelve years. Weaver and Tidwell, LLP. was the firm hired to perform the audit.

During Monday’s city council meeting, Travis J. Casner, Certified Fraud Examiner of the Forensic and Litigation services branch of Weaver, presented over an hour’s worth of findings regarding topics that ranged from financial compensation to travel and credit card expenses, to operational and procedural issues, to staffing issues.

At the end of the presentation, councilman Darrell Jones asked Casner if, during the audit, he had found any money “missing, stolen, or misplaced.” Casner replied, “I don’t think there is any direct expenditure. I guess if you looked at not reporting some of the compensation. We didn’t include any findings of fraud as far as like, stolen.”

“So you’re saying that there’s no fraud?” Jones asked.

“Let me back up,” Casner replied. “The findings in here are based on the work performed as outlined in the scope of work and we’re presenting those findings. The intent of this report, or any report that I could even deliver as a certified fraud examiner, is that I cannot present any finding that says there is or is not fraud.” Casner went on to say that there were areas where they had outlined some concerns, like the bonus payment in 2020. “There isn’t any conclusive evidence that shows there was an authorization for that payment. So we can’t make any conclusion without that information being available.” Casner said that there was a potential misuse of funds going back to 2010 because there was no proper word authorization for those payments and that some of the payments may be in violation of Texas code. But as far as determining if the actions were construed as fraud, Casner replied, “Fraud is something that is determined by a jury, and I cannot, or anybody in this room cannot make a determination about fraud.”

Before retiring into executive session, Mayor Dr. Ianthia Fisher said “It was a good thing for the council that they went back for a broader scope. We debated about that, but you can see that over the years, there’ve been a lot of bad practices, for lack of a better term.” Fisher remarked that in hindsight when the CEIDC “disbanded,” it would have been a perfect time update the policies and make sure everything was done in a systematic, legal, detailed way. “But you did see that it was a series of practices that weren’t functional that were passed on... and they were never stopped.” Fisher went on to say, “There are a lot that bear responsibility for what has happened. And it’s the council’s responsibility to make sure they don’t continue to happen.”

The council adjourned into executive session.

Upon their return to open session, Councilman Mike Marsh made the following motion, “Mayor, I’d like to make the motion to temporarily suspend all activities of the Crockett EDC, and request our police chief open an investigation into each of these audit findings and determine all responsible parties for the financial and operation misconduct of this corporation. He can request outside support as needed during the investigation. The Executive Director and all his staff will be placed on paid administrative leave and comply with all investigations by providing full access to any EDC records in the office. No EDC staff or board members will conduct business or have access to any EDC offices unless the police chief is present. During this investigation, no EDC staff or board members will sign checks or use credit cards. The mayor and the mayor pro tem will be added as signers to the EDC checking account to pay all existing and approved debts or commitments after they are presented to the city council for approval.”