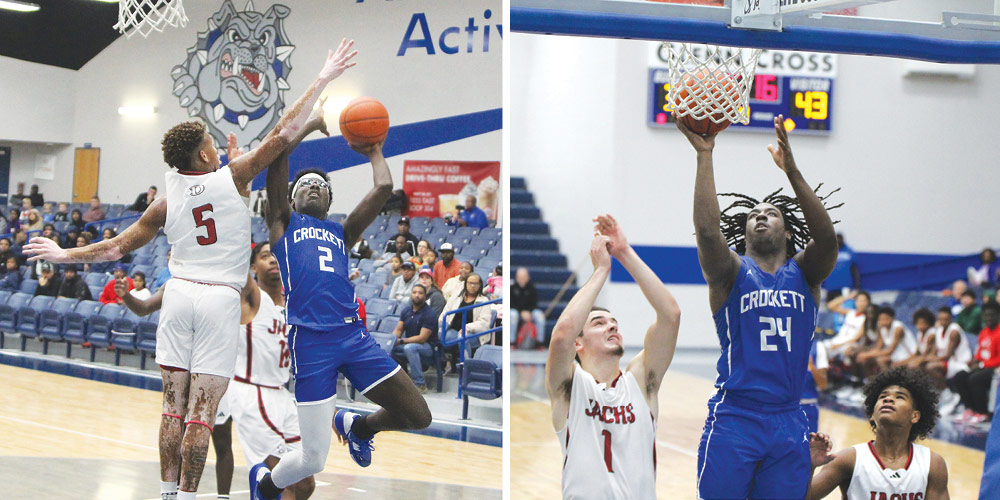 Crockett's Jadyn Collins (2) and Courtney Byrd (24) were named to the All-Tournament Team at the conclusion of the Houston County Holiday Classic. Photos by Larry Lamb

CROCKETT– The Madisonville Mustangs knocked off the Crockett Bulldogs 52-35 to capture the Gold Bracket championship in the Houston County Holiday Classic Friday afternoon.

The first quarter ended in an 11-11 tie after Crockett's Iverson Rischer drained a late trey.

Madisonville pulled away in the second quarter with a 14-5 run and led 25-16 at halftime.

After the Mustangs went up by 11 early in the third, Crockett junior Antwaain Boston drained back-to-back 3-pointers and Jadyn Collins hit a bucket-and-one to complete a 9-0 run that made it a two-point game, 27-25.

After falling behind by 15 early in the fourth, Collins swooshed in a triple and Boston knocked down two free throws to make it 10-point game with 5:00 left.

Madisonville quickly stretched its lead out to 48-32 with 2:00 left on three unanswered baskets.

Courtney Byrd closed the gap to 13 with a basket and free throw with 1:44 left, but the Bulldogs would get no closer.

Collins led the Bulldogs with 13 points and Boston followed with 8. Rischer and Byrd rounded out the scoring with 7 apiece..

Collins and Byrd garnered All-Tournament recognition, along with three Mustangs.

The Lumberjacks, ranked No. 20 in this week's TABC state poll, found themselves in a 15-0 hole at the end of the first quarter but mounted a furious comeback to get into the game.

Collins was the top scorer with 22 points, Byrd tossed in 11 and Boston had 10, including a pair of threes.

Tywoin Delane scored 8 and Rischer rounded out the scoring with 6.

In their opener against Aggieland, the Bulldogs led 32-17 at the half but saw the lead cut to 42-34 in the third. Crockett closed out the game with a 15-8 run.

Collins poured in 23 points and Jaroderick Holmes had 13.

After Maypearl slipped in front 52-50 with 2:00 left, Collins scored two straight baskets and Holmes knocked down a pair of free throws to put

Crockett up by five with :18 left. Maypearl closed the gap to three points with 10 seconds left.

Byrd was the top scorer with 17 and Collins had 12. Holmes was next with 9 and Boston had 8.

Back in action Thursday, the Bulldogs nipped Rusk 56-55.

They outscored Rusk by 15 in the second for a 29-17 halftime lead. Rusk faced a 10-point deficit heading into fourth but outscored the Dogs 23-14.

Crockett wrapped up pool play with a 67-54 win against Da Vinci School of El Paso.

Byrd paced the scoring with 17, Collins had 15 and Nate Ivey rounded out double figures with 10, including two treys.