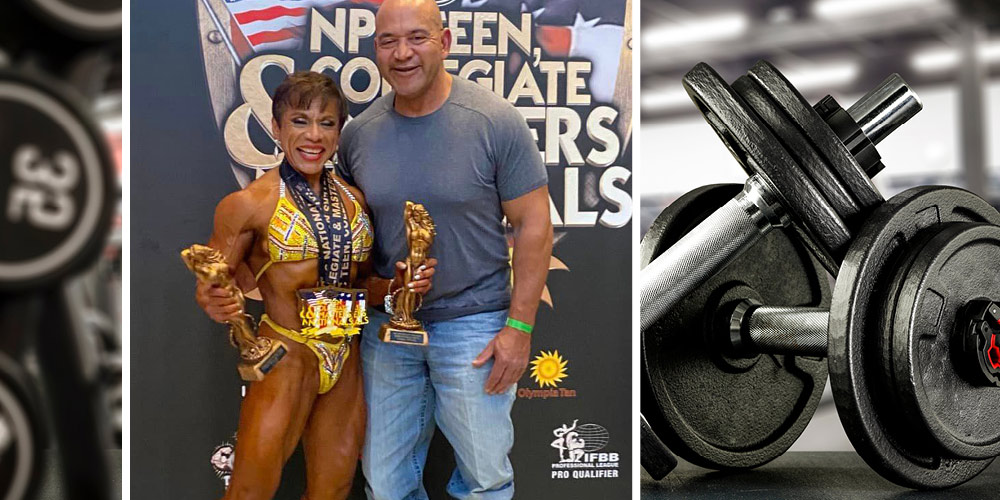 In a video recorded for NPC New Online, interviewer Skylar Lanier called Eunice Kitchen “the Michael Phelps of the National Masters World Championships.”
Like Phelps, Kitchen walked away from the competition with an armload of medals and trophies.

The event, sponsored by the National Physique Committee (NPC) and the International Federation of Body Builders (IFBB), was held in Pittsburgh, PA, this past summer. During the interview, Kitchen was asked, “How does it feel to be not only an IFBB pro but a TWO-time IFBB pro.”

“It hasn’t sunk in yet,” Kitchen replied. “I knew that one day my dream would come true. I’ve been lifting since I was 15, and this was one of my dreams.”

From her humble start in San Benito, Texas, Eunice Martinez Kitchen has come a long way to reach her goal. It began when she was accompanying her father on a construction job. Kitchen saw a full-sized poster of Rachel McLish, the first crowned Ms. Olympia. Fascinated, Kitchen made up her mind that she, too, would become a professional bodybuilder like McLish.

While attending college at Stephen F. Austin State University, Kitchen joined a gym where she was one of only two females who lifted weights. The gym’s owner encouraged her to enter bodybuilding competitions. It was also at SFA that she met her husband, Willie Kitchen.

After the couple moved to Crockett, Kitchen said she would commute to Nacogdoches to continue her workouts, but the commute was challenging to her training schedule. Kitchen and her husband decided to start their own gym, and Muscles and Curves opened its doors in 1991. Kitchen says she competed back in the 80s and 90s for about thirteen years but never won her ‘pro card.’ So she decided to retire from competition.

Although Kitchen left professional bodybuilding, her journey in health and fitness continued. She has a degree in food systems/dietetics from SFA. She served as a public health nutritionist for the Texas Department of Health and the University of Texas Medical Branch in Galveston for eighteen years. She became a member and Certified Trainer with the American College of Sports Medicine. Kitchen obtained certifications as a Fitness Specialist for older adults, a Pilates instructor, a Primal Movement Consultant, a life coach, a functional movement specialist, a strength and conditioning specialist, and is a member of the National Strength and Conditioning Association.

Kitchen also lobbied for funding of the Secured Rural Schools and Counties alongside a coalition group in Washington, D.C., and is the founder of the annual Davy Crockett Classic cycling race in Crockett. In 2021, Kitchen was nominated as one of the top personal trainers in the state.

But Eunice Martinez Kitchen never let go of her dream.

When she discovered that the NPC and IFBB were adding a Master’s League to their competition, Kitchen decided to compete again. “So I retired for twenty-four years but returned in 2019, thinking that maybe now there was a Master’s Division I could earn my pro card.” Although she competed in 2019, 2020, and 2021, Kitchen told herself, “This is my year.”

And she was right. 2022 was most definitely Eunice Kitchen’s year. She won seven awards in bodybuilding and physique competitions.

When asked about her favorite part about prepping for the events, Kitchen stated, “It has to be the personal growth. The commitment. The drive. The fortitude that it takes. Each prep is different. Each prep is a challenge. But in each prep, there’s personal growth. There’s spiritual growth. And you become in tune with your body. Your body is your sanctuary. You learn the inner part of you. You know that if you can do a prep, you can do anything in your life.”

Regarding the wins, Kitchen said she wanted to thank her Lord and Savior, who has kept her safe and given her the energy, drive, and focus. She also wanted to thank her husband, Willie Kitchen, “who’s my biggest fan and believes in me better than I do.” She also thanked her team, her gym staff at Muscles and Curves, and the members who have supported her with phone calls and texts. In a recent interview, Kitchen stated, “I came from dirt poor, and nothing’s ever stopped me. The only thing that can stop you is yourself.”

On Tuesday, the unstoppable Eunice Kitchen was honored for her personal and professional achievements by the Houston County Commissioners Court, which proclaimed Dec. 27 as “Eunice Kitchen Day.”