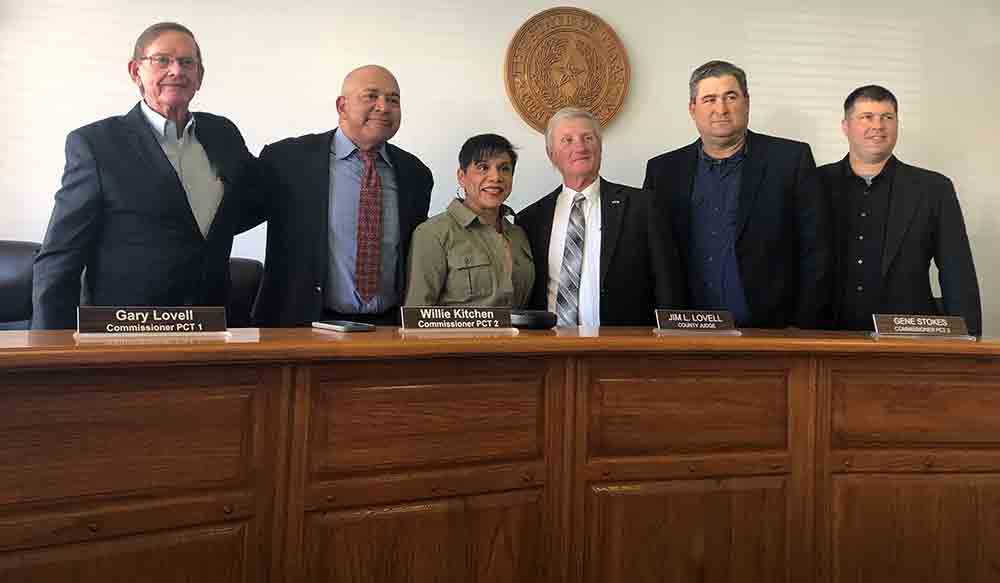 CROCKETT – At Tuesday’s meeting of the Houston County Commissioners Court, the court passed two important resolutions: a resolution calling for additional measures to secure the border and a declaration of Dec. 27 as “Eunice Kitchen Day.”

The first resolution was the brainchild of Commissioner Gene Stokes. Stokes said that the proclamation was to show support for Gov. Greg Abbott and his work at shoring up the borders and to let officials know that the county endorses more governmental support. “We are being invaded,” Stokes said, “ and we are asking our Federal Government to do their jobs to stop the invasion.” Stokes went on to read statistics on how many illegals have crossed over into the country. Regarding the proclamation, Stokes said, “A number of counties have already done this.” The resolution calls for additional measures to secure the border, stop the invasion at the border, and protect our communities, and will be sent to state and government offices.

The next resolution was on a more personal note. The court proclaimed this “Eunice Kitchen Day” in honor of her achievements not only at the local level but for winning several medals and awards at the “National Masters World Championships” bodybuilding and physique competition this past July. Kitchen, who is 57 years old, is an inspiration to the community.

In other business, the court approved the hiring of Thomas Morgan Phillips as a new jailer, approved the Hotel Occupancy Tax Fund request for Bear Hall, accepted a donation of $2,000 from the JB and Kathryn Sallas Charitable Foundation for the Senior Citizens Center, and approved the addition of a phone and line for the new insurance coordinator.

The court also heard a report from Gene Kellum with the Houston County Search and Rescue. Kellum reported that the group had received nine “callouts” over the year, ranging from lost kids to adults with Alzheimer’s. Kellum said that their average recovery time is two hours and forty-five minutes. Kellum stated that the organization has twenty-seven members and is currently located at the armory.

During the meeting, Judge Jim Lovell also reported that Chief Deputy Roger Dickey had suffered a stroke over the Christmas holidays and was transported to Houston.

Lovell noted that he spoke to Dickey yesterday and that Dickey was having trouble with balancing and walking. Lovell also said that Terri Meadows, county clerk, had suffered a fall but was on the mend. Prayers for Dickey and Meadows were requested.