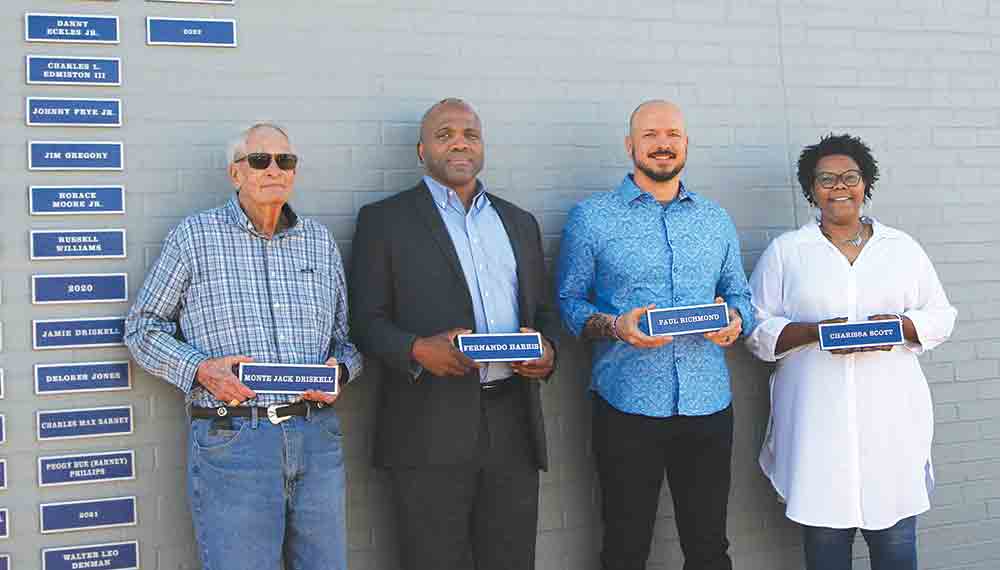 2022 Ring of Honor inductees Monte Jack Driskell, Fernando J. Harris, Paul Richmond and Charissa Scott stand at the wall in Driskell Stadium where plaques bearing their names will be displayed along with the previous honorees.

CROCKETT -- Crockett ISD tapped a former coach and three alumni for the 2022 class of the Bulldog Ring of Honor.

Crockett ISD Supt. John Emerich said in welcoming attendees, “You all know as well as I do that Crockett is a special place and this is a very special celebration of some very special people that we have here tonight. I’ve never been anywhere else that honors the past the way we do here with the Ring of Honor. I think it’s a great thing."

Emerich continued, " I know some of you in the audience are on the wall yourself already and that’s why you’re here. There’s a lot of family here for these four individuals that are being honored. I look at these (school) board members here and every one of them is a Crockett graduate, so they know about how special this place is and they've stayed here or come back here, whatever the case may be. We’re proud to have you here tonight and we’re proud of these four individuals. Let’s get on with celebrating them.”

Master of ceremony Ansel Bradshaw read brief biographies of each inductee before they were presented their Ring of Honor plaques.

After the ceremony and a brief reception, the new members gathered at the Ring of Honor wall in Driskell Stadium where plaques bearing their names will be displayed.

At halftime during the Bulldogs' football game, the four honorees were introduced to the large homecoming crowd.

Born and raised in Lovelady, Monte graduated from Lovelady High School in 1952.

He received a basketball scholarship from Wharton Junior College, where he played basketball and met the love of his life, Janet.

Monte transferred to Sam Houston State University where he played basketball for three years. He received his bachelor's degree from Sam Houston in 1957 and his master's in 1961.

Because Monte wanted to go back home and coach high school, he returned to become head coach and athletic director in Lovelady from 1974 to 1981.

He returned to Crockett as head coach and athletic director from 1981-1999 and had great success.

In 1988, Monte was inducted into the Texas High School Coaches Hall of Fame as well as the Sam Houston State University Hall of Fame.

Bulldog Stadium was renamed Monte Jack Driskell Stadium in his honor on October 1, 2010.

The Driskells have been married 65 years, marking their 66th football season. They have three children, Cheryl, Dusty and Jamie, six grandchildren and three great grandchildren.

Fernando, a Crockett High School graduate, is the owner and president of Blue House Partners, LLC in San Diego Calif.

Harris is a business professional with over 20 years leadership and management experience, combined with extensive strategic planning and business operations capabilities.

Harris is a retired U.S. Navy Commander and has been director has been a director  of a Fortune 500 company.

His educational accomplishments include earning a Bachelor of Science in mechanical engineering from U. S. Naval Academy; a master of science in National  Security and Strategic Studies from Naval War College; and an MBA from Northwestern University's Kellogg School of Management. He was also recognized as a top graduate of the Darden Navy Executive Educational Program at the University of Virginia.

His work has taken him around the world, including time spent in San Diego, Washington D.C.; Kabul, Afghanistan and even time aboard the USS Kitty Hawk in Yokosuka, Japan.

Paul graduated with the CHS class of 1998 with several awards reflecting his success as a student-athlete.

Paul continued his academic and athletic career at Baylor University where received the 2002 NCAA All-Region Team and First Team Academic All-Big 12 Conference and his BBA in accounting.

Following college, Paul was drafted in the 28th round 2002 MLB draft by the Toronto Blue Jays where he played for two years.

Now the senior vice president for Transcarent Health Care, Paul leads national efforts to expand the company's market-leading Centers of Excellence panel. For more than 16 years he has been an expert in provider relations and has extensive experience in healthcare, specifically intra-operative consultive  sales, negotiating system-level agreements for medical devices and capital equipment, and value-based care initiatives. Paul has served in numerous leadership positions throughout his professional career in healthcare, most recently as an account executive serving Fortune 500 clients and the surgical management benefit space.

Some of the honors she is most proud of are All-District awards in basketball and softball, Academic All-State, U.S. Army Academic Athlete, cheerleader/mascot, drum major, prom queen, National Honor Society ,Miss Juneteenth 1995, Who's Who, homecoming queen and Miss CHS.

Upon graduation Charissa continued her education at the University of Houston.

For the past 14 years, Charissa has continued to share her academic talents in her career and resides in Houston.