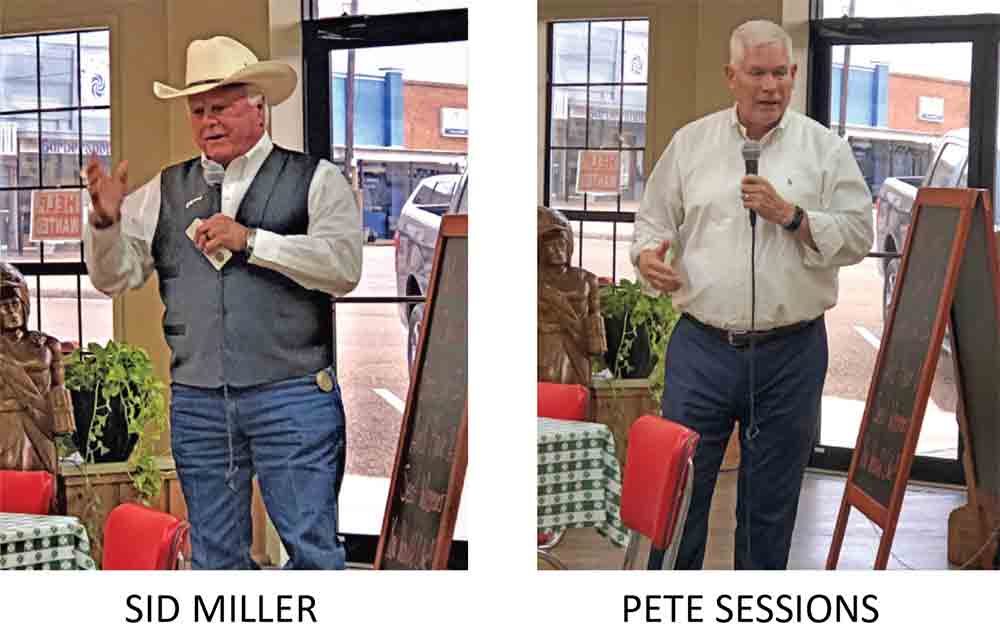 CROCKETT – Republican incumbent candidate for Agriculture Commissioner Sid Miller, and the U.S. Representative for the 17th Congressional District, Pete Sessions, made an appearance at the Moosehead Café in Crockett on Thursday, Sept. 1, to share their platforms and encourage voters to hit the polls in November.

Sessions spoke first. Due to the redistricting that took place after the results of the 2020 census, Sessions will take his seat as Houston County’s representative in January of 2023.

Before introducing Miller, Sessions took the opportunity to share a little about himself and speak on his concerns for the upcoming mid-term elections. “I want you to know that this is a very important county, and you are very important.”

Sessions’ main emphasis was to encourage voters to get out and vote for their candidates. “I endorse every single Republican that’s on the ballot,” Sessions said. “I want to be a leader for Republicans. For common sense people. And just like Sid Miller, I will be here for you. I’m very proud of our awesome Ag Commissioner.”

Sessions turned the microphone over to Miller to talk about the future of agriculture in Texas. Out of the chute, Miller stated, “The one thing I’ve learned is that our greatest natural resource we have in this state is not oil and gas. It’s our youth. We put a huge emphasis on that as a part of agriculture because the average age of the Texas farmers and ranchers is fifty-nine-and-a-half. So we’ve got to have that younger generation coming along to take over that mantle and furnish food for the next generations.”

During Miller’s talk, he interspersed personal and humorous stories and discussed the various roles the Agriculture Department plays. “We lead the nation in agricultural exports. We oversee production, transportation, and marketing. “We do the sows, cows, and plows,” Miller said, “But we do a lot of stuff you don’t know about. We’re the consumer protection agency for the state.” The AG Commission is responsible for bar code scanners and the accuracy of scales and even ensures the precision of the ping-pong balls used in the Texas lottery.

The Commission also helps manage the National School Lunch Program, and is responsible for millions of daily school meals, helping to introduce fresh fruits and vegetables from local farmers to local cafeterias. They sponsor the Go Texan program dedicated to developing, encouraging, assisting, and promoting Texas products and services. The Commission also initiates and supports international livestock and produce exports.

Miller said that his priorities for the upcoming year include putting an armed guard in every school cafeteria in the state. Referring to the shootings in Columbine and Uvalde, Miller said, “Without exception, these mass shootings have happened in a “Gun-free Zone. They know that there’s no opposition, and they can just walk in uncontested.” His reasoning for targeting cafeteria protection was the number of children in one room, and the predictability of their lunch schedule.

Another of Miller’s goals is to put the medical decision to prescribe medical cannabis in the hands of doctors, “Not bureaucrats and legislators,” said Miller. “We’ve had medical cannabis since 2011, but [the government] picks winners and losers. So if you have epilepsy, your doctor can treat you with cannabis. But if you have Parkinson’s, which cannabis helps, you can’t get it legally. So we’re making criminals out of people because it’s the only way they can get relief. It’s time to let doctors decide who can use that.”

Regarding the sale of land to China, Miller said, “My biggest pet peeve, and the most stupid thing we do as a nation and a state, is to allow China to buy our farmland.”  He went on to say that he doesn’t think the nation should allow China access to the power grid, food supply, or proximity to military installations. “We can stop it as a state,” Miller said. “It needs to be nationwide, but we can at least stop it as a state.”

Miller concluded his talk by emphasizing, again, the importance of voting, and stumped for the GOP. “Rural Texas has got to carry the Republican party,” Miller said. “Y’all have got to turn out as many voters as you possibly can.”

The meeting then opened up to a question and answer period. Most of the questions were related to voting, with both candidates encouraging voters to hit the polls and reminding them to contact legislators with their concerns. Following was a meet-and-greet, where attendees were encouraged to take pictures with the representatives and ask any additional questions that weren’t answered during the general portion of the meeting.