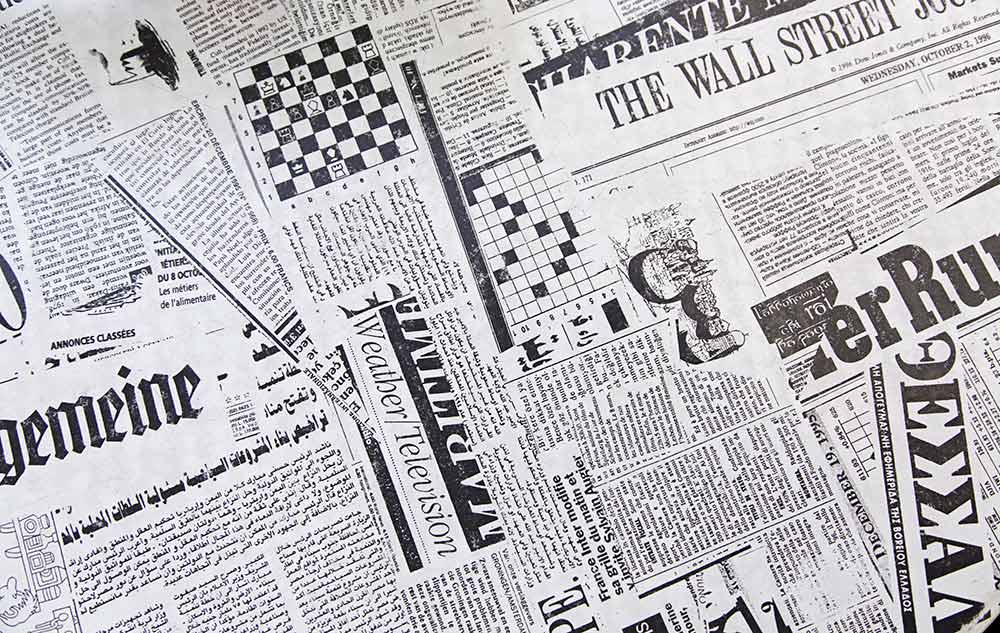 Houston County is steeped in history, which is one of the things that draw visitors to the area. And many books have been written about that history. One of those books is The History of Houston County Texas, written by Armistead

Albert Aldrich and published in 1943.

In it, Aldrich has documented a variety of topics about Crockett’s beginnings and its founding families. One of the chapters is titled “Houston County Newspapers.”

According to Aldrich, the first newspaper published in Houston County was The Crockett Printer. The paper was owned and published by Oscar Dalton, who began the publications shortly after coming to Crockett. The newspaper’s first issue was dated December 6, 1853, and was released every Wednesday at the cost of $2 per annum, “inevitably in advance,” as noted by the proprietor. Dalton noted in his first issue the problems he faced in getting the newspaper up and running. “First,” he states, “we failed in getting our materials up before the yellow fever broke out in Houston, after which it was impossible to get a wagon at any price.” Fortunately, with the aid of a couple of local patrons, they were finally able to move the press. But their problems didn’t end there because “some Blaggard on the road near Houston stole our keg of ink and placed us under the necessity of borrowing from our neighbors of the Trinity Advocate.” Dalton gave the Advocate this blessing for their assistance, “May their sheet never be pale for the want of ink.”

In that first edition, a contributor, calling himself “The Oldest Inhabitant,” gave a brief description that provides readers with a bit of insight into Crockett’s early history.

“Unlike most historians, who depend upon preceding writers for their materials, the Oldest Inhabitant himself, contemporary with Crockett, is enabled to note its rise and progress, free from the melancholy task of recording its decline and fall.

Crockett was located at the county site of Houston County in the winter of 1837, owing to its position to its being the only point within a reasonable distance of the San Antonio Road and the center of the county, where running water could be found.

It was emphatically a frontier village, but a three-hour ride from the buffalo range. For several years Indian outrages were committed in its vicinity. The Coushatta hunted on the South, the Cherokees joined the county on the East, while North and West, the wild or Prairie Indians penetrated the sparse settlements almost unperceived and generally unpunished.

Distance from market (Trinity not being then navigated), danger from Indians, and the usual inconvenience of a frontier country, long retarded the settlement of the county and the growth of the village.

Although a log courthouse and jail were erected and the legislature had granted a charter providing for the election of a mayor, eight aldermen, a town clerk, etc., for some months, the solitary citizen, who kept a store in a 16-foot long cabin, was daily asked, ‘How far to Crockett?’ “You are right in the public square of Crockett, Stranger,” was the answer.

In 1839 there were two resident families, and the danger from Indians was so urgent that the neighbors fortified the courthouse lot with pickets and took shelter with their families until immediate danger had passed.

For two years, the sittings of the district court were suspended, during which time cases of assault and battery were so multiplied that succeeding grand juries declined to notice them.

Card playing and quarter racing were the favorite amusements on public days. The eastern and western mails arrived on an average of twice a month. The northern mail for Fort Houston was sent whenever there was a chance, and then generally in the crown of a hat. The Galveston mail was once suspended for five months and, at last, arrived in coffee sacks on an ox wagon.

Sassafrass tea, rye, coffee, milk and whiskey were the only beverages that could be depended on, as coffee frequently could not be had at any price. In the way of diet, steel mill bread and jerked beef were the great staples.

Indian hardships and, it is to be hoped, dissipation have passed away forever from Crockett, and there is every indication that it course is onward and upward. The telegraph has entered our town; a substantial brick courthouse has just been completed, and the Masonic Hall, Temple of Honor, and free church are well attended. Six stores, two taverns, a boot and shoemaker, four smith shops, a wagon, three cabinet shops, a tanyard, and a saddler’s shop, accommodate the public. Professional gentlemen offer their services to clients and patients, our bricklayers are busy, and all the usual means and appliances of civilized life may be found in our village.

The very institution of a newspaper indicates the progress of Crockett, and there can be no doubt that its future pages will record a state of things that will throw into the shade and render incredible these scanty remembrances of The Oldest Inhabitant.”

These days, printed newspapers are considered to be something of a dinosaur – on their way to extinction. But in the same way that The Oldest Inhabitant recorded his observations of a growing town almost one-hundred and 69 years ago, today’s newspapers serve as a tangible record of the community as it expands and evolves, which invokes the question - What will our local newspapers reveal to someone who reads about our history one-hundred and sixty-nine years from now?