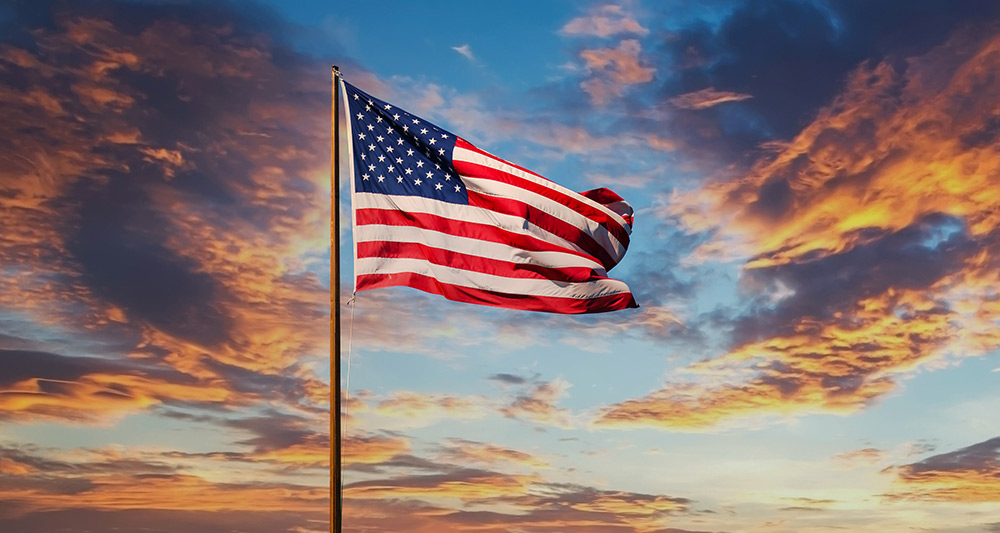 But what is the history behind the banner that represents our great nation?

The story of our flag begins with the American Revolution in 1775. Flags have always been important to soldiers. During battle, the men had trouble staying with their battalions when the air was clouded with dust, smoke, and debris. Flags or banners were developed so that they could recognize their own. Looking up at the sky, a soldier could see his unit’s flag waving in the wind, which helped reunite him with his fellow combatants.

At the beginning of the revolution, there was no single flag to unite the colonists. Most soldiers fought under regimental flags, which were as varied as the states and the men they represented. There was the Bedford Flag, carried by the Massachusetts Bay Militia Company during the French and Indian War and passed down through the years by the Nathaniel Page family. The Bennington Flag was one of the more popular Revolution flags, taken from the Battle of Bennington, Vermont, by Nathaniel Filmore. New England commonly used the pine tree to represent freedom, so both the Continental Flag and George Washington’s Cruisers Flag added the tree to their designs. And the popular phrase during the war, “Don’t Tread On Me,” was used on several flags, like the Gadsden Flag, the first Navy

Jack Flag, and the Culpeper Flag, along with the etching of a rattlesnake – a symbol which had begun to represent the colonies.

But when the Second Continental Congress met in Philadelphia in June of 1775, George Washington, the army’s commander-in-chief, wanted a universal flag that would connect all the soldiers and represent a unified front. He ordered a flag to be created called the “Continental Colors.” There’s a lot of speculation as to who designed the first flag. Some say it was Margaret Manny, a Philadelphia seamstress who had created flags for patriot ships. Others believe it was created by Benjamin Franklin, Thomas Lynch, and Benjamin Harrison, members of the Congress appointed to help establish the Continental Army. One popular legend has George Washington approaching flagmaker Rebecca Young sometime in 1775 and asking her to make the flag.

While unclear who exactly designed the flag, it’s evident that they based the concept on the familiar British Union Jack. The Continental Colors flag contained thirteen alternating red and white stripes with the Union Jack in the upper left-hand corner. Many have wondered why the colonists would include the British Union Jack on their flag if they were angry and wanted independence. According to flag historians, the design of the Continental Colors was a compromise between those who wanted to see a separate nation from Great Britain and those who still considered themselves British citizens and were loyal to the Crown and wished to see accommodation with the King. However, since the flag was supposed to express the group’s desire for independence from Britain, using the Union Jack proved to be a mistake because many British troops interpreted it as a sign of surrender.

It wasn’t until June 1977 that the Second Continental Congress took time out from drafting the Articles of Confederation to pass a resolution on a newly designed flag. The new flag representing the United States of America would “…be thirteen stripes, alternating red and white, and the union to be thirteen stars, white in a field of blue representing a new constellation,” in the upper left-hand corner. And even though Betsy Ross was associated with the flag from the start, it wasn’t until 1870, nearly a hundred years later, that her grandson, William J. Canby, related his version of the story. After Congress decided upon the design, Colonel George Ross and General Washington visited Mrs. Ross [the colonel’s widowed niece] and asked her to sew the flag. Ross, an upholsterer who worked on uniforms, tents, and flags for the Continental army and reportedly made bed hangings for Washington, was skeptical. “I don’t know whether I can, but I’ll try,” she said and recommended that the six-cornered stars, suggested by Washington, be replaced with more symmetrical five-pointed stars. Ross is said to have made the first American flag shortly after that meeting.

Over the years, as new states were admitted into the Union, a new star and a new stripe were added for each state, but doing so made the flag cumbersome. So in 1818, it was decided that the design would revert to the original thirteen rows of red and white stripes reflecting the thirteen founding colonies, and new states would be symbolized by the number of stars in the upper left-hand corner of the flag. Between 1777 and 1960, stars were added twenty-seven times. The flag as we know it was adopted on July 4, 1960, although there were contingencies in the works to add additional stars if necessary.

The American flag is a symbol recognized worldwide. It has been used to display our nationalism, our rebellion, and everything else in between. It also tells the story of America. And although the flag’s design has changed over the years, its purpose has remained unchanged. It reminds us of America’s fight for independence from tyranny, of the lives sacrificed to procure our freedom, and hopefully, it encourages us to continue striving for the ideal of “liberty and justice for all.”