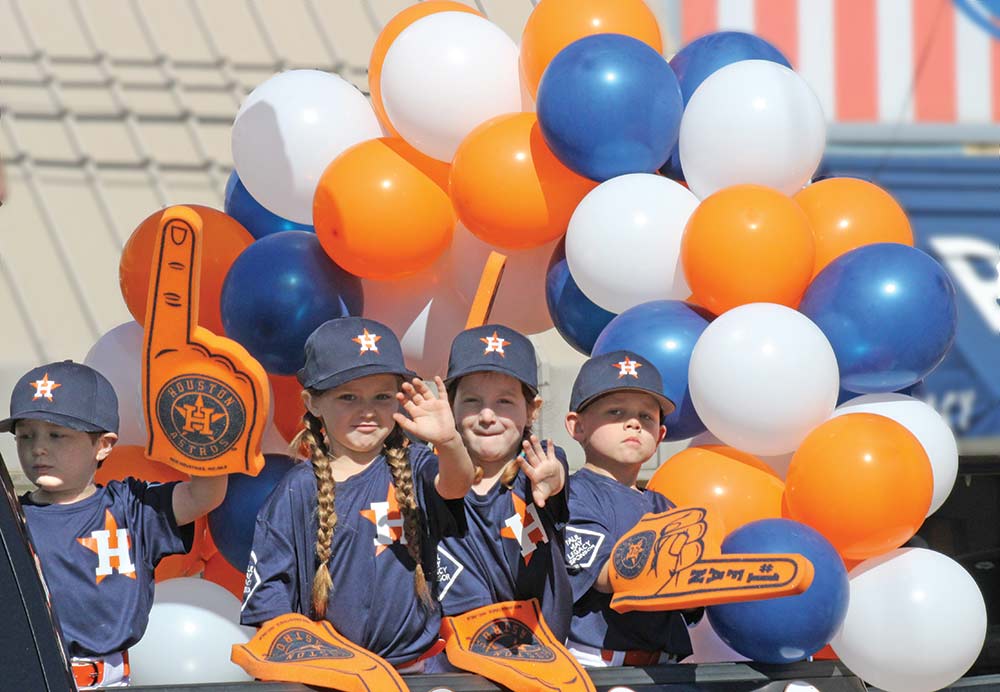 CROCKETT – One sure sign that spring has sprung is baseball.

Saturday, April 9 was opening day for Crockett Merchants Youth Baseball, and it was a picture-perfect day to play ball. For the first time in several years, a chance of rain was not hanging over opening day festivities and the itinerary for the day went as planned by the volunteer-run league.

At 10 a.m., the day kicked off with trucks, trailers, and floats filled with grinning faces of nervous boys and girls ranging in ages from fourteen to four years old. The parade proceeded around the square and ended at the ballpark.

Ansel Bradshaw, the longtime emcee for opening day, welcomed guests and proceeded to award Davy Crockett Drug with the Paul May Legacy Sponsorship award for being a loyal supporter of youth baseball. A representative from Crockett Police Department, Crockett Volunteer Fire Department, and Houston County Lifeguard/EMS was asked to step onto the field and each representative threw the first pitch. All three entities were also awarded Paul May Legacy Contributor awards as a community-wide thank you for their dedication to Crockett and surrounding areas.

Each team had the opportunity to present and sell a cake in the annual auction that is the sole fundraiser for Crockett Merchants Youth Baseball. We asked the president of the league, Brad Bond, how much in total was raised, “Off the top of my head, I would guess upwards of $18,000. Before the cake auction even began, we received donations from the Lothrop 21 Masonic Lodge and the Sallas Foundation group and I think with those donations and the auction, we probably raised over $20,000.” Mimsy’s Craft Barbecue, and its soon-to-be companion meat market and spice company, was the biggest supporter. Not only did the owners add-on $25 to each team’s cake but they also bought the Orioles and Royals cake for $1,000 each, bringing their total donations to $3,325. Co-owner of Mimsy’s, Kim Spellman, said, “We must keep these kids involved and focused on activities that keep them on the field and off the streets. Winning, losing, it’s all part of it but it’s important to us to be involved.”

The first game on the Major Field was held at 1:00 PM and was played by two 8U teams. The Pirates, with coaches Nate Heersink, TJ, and Jacquelyn Tabor, versus the Giants, with coaches, Colin and Ashley Keenan, Ford Santa Maria, and Ty Salmon tied 2-2. It was quite an intense game with an inside-the-park home run scored by Jaxon Tabor for the Pirates. Both runs for the Giants were scored by Gabriel Angerstein.

Announcer Charlie Bobbitt proclaimed, “Now that was a good game!”

Crockett Merchant Youth Baseball welcomes all players, no matter the experience. And this season marks CMYB’s second year with the Dixie League, which is slightly more elite than your typical little league and requires a bit of travel and a rulebook that prepares players for real baseball earlier. President Brad Bond guessed that approximately 145 kids signed up for the 2022 season and are split up into 14 teams with divisions from 4U to 14U. Practices began the first week of March which was earlier than usual but a nice change to give coaches more time to work with their team and build the necessary chemistry between players. The regular season ends the last week of May, and All-Stars games begin in June.