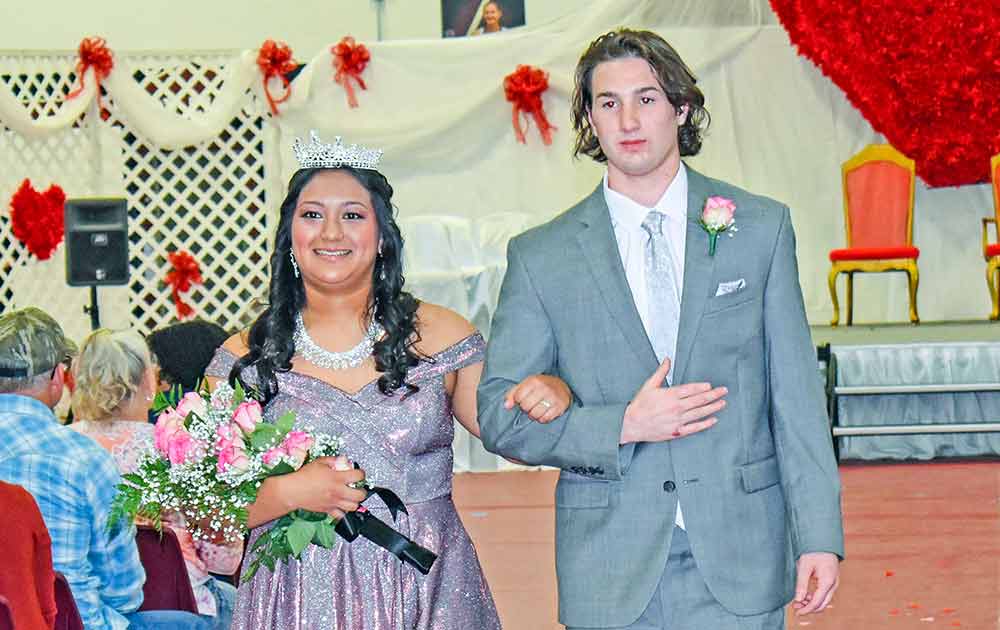 LOVELADY – It didn’t take long for the parents, students, teachers, and friends packing the Lovelady gym to learn who won the honor of being named 2022 Lovefest Queen. The ceremony, which took place on Thursday, Feb. 10, began with a welcome by Emcees Alexis Bodden and Ace Easton, who moved quickly to the first order of business – introducing last year’s Queen and this year’s Royal Court.

Emcee Alexis Bodden explained that the 2022 Queen was chosen from the accumulated scores of a written essay and an impromptu four-minute speech. Ace Easton then took to the mike and announced, “And now the moment we have all been waiting for – the 2022 Lovefest Queen is Ms. Magali Castillo, representing the Senior class.” Following her crowning by former Queen Kyra Rogers, Ms. Castillo, escort Conner Martinez, and the rest of the Royal Court took their places on stage to watch the evening’s entertainment.

The program began with Pre-K and kindergarten students performing a dance routine to Elvis Presley’s “Hound Dog,” followed by a duet of “High Hopes” by Emma Yauger and Christina Ray. Next up, Ledisi Taylor and Crew and their backup singers and dancers performed a routine to Beyonce’s “Halo.” Louis Armstrong’s chart-topper “What a Wonderful World” was the backdrop for the first and second-grade performance. Then the action kicked up a little with a feisty routine by The Git Up Dancers, followed by Billy McMillan’s rendition of George Strait’s “Heartland.” Seth, Remington, and Clara Dagle delivered a foot-stomping, hand-clapping version of “My God Fights For Me.” The third and fourth grade performed to the jazzy hit “L.O.V.E.” and the evening concluded with Quade McLaughlin’s percussion accompaniment to the KISS classic “Rock and Roll All Night.”