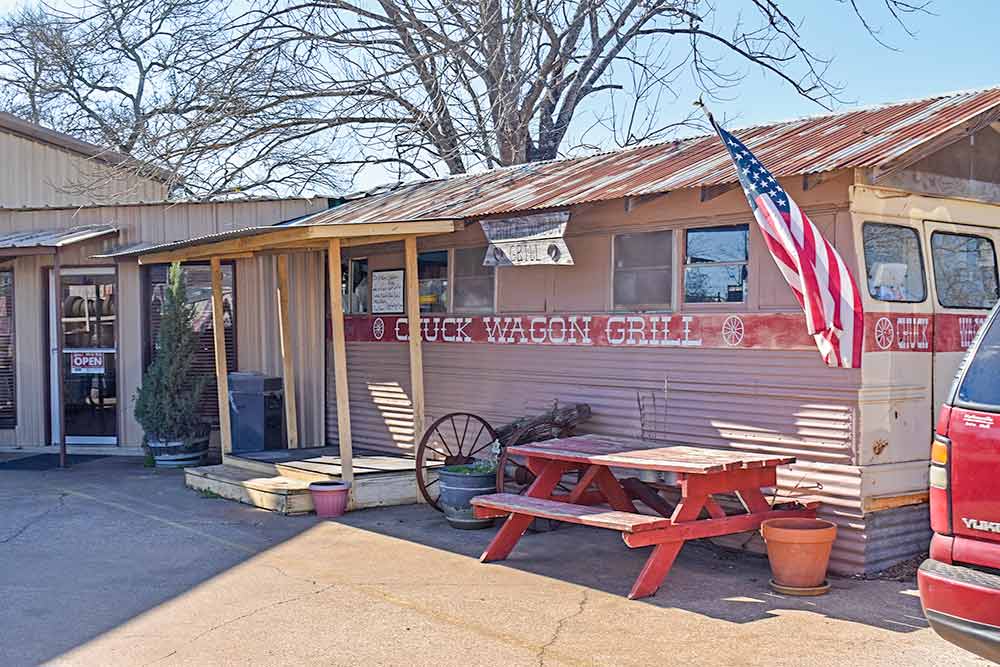 CROCKETT – “You can’t do a story about the Chuck Wagon Grill without the story of Tillis Tire and Detail.”

That’s what Regina Tillis said when I sat down to talk to her about how the Chuck Wagon Grill got its start. And she is right. The two businesses have a shared history that began when Regina and W.L. Tillis were children. Growing up in the same neighborhood, Regina was best friends with W.L.’s younger sister. And like a typical older brother, W.L. viewed Regina as a little kid. When he found out Regina had a crush on him, his words were,  “You’re too young for me.” But years later, all that changed. As small-town graduates often do, Regina and W.L. left Crockett. But as fate would have it, they returned to the old neighborhood, and the next time W.L. saw Regina, she didn’t seem too young for him anymore. They married and established their lives back in their hometown. Regina and W.L. have been married now for 20 years.

The Tillis’ have always been hardworking people. Along with his job driving 18-wheelers, W.L. purchased a couple of tractors and found jobs mowing pastures for local farmers. After work, he would mow – and when Regina got off work, she’d go out and mow until dark. It wasn’t long before W.L. decided he needed a place to store his tractors rather than park them in his yard. He arranged to lease an old tire shop from a coworker. When W.L. visited the shop, he noticed that the previous occupant had left an old tire machine and some extra tires. He contacted the owner but was told just to keep the equipment. W.L. said that the second day he was there, people came by and asked if he could fix their tires. And that’s how the tire business got started.

Tillis Tire and Detail opened in 2007, but it was two years later before Regina began her hamburger business. That, too, came about in a rather unique way.

Regina’s training was in the medical field. She had worked in Crockett nursing homes and eventually took a job in the juvenile corrections field with the Youth Commission. Regina’s job was in the infirmary. When the Youth Commission began to shut down operations and phase out jobs, the medical workers were the first to transition out. Not one to just sit at home, Regina offered to help W.L. out at the tire store, working the cash register, or running errands. In their evenings together, W.L. and Regina would talk about their day’s journey. It was during these conversations that Regina mentioned an idea to her husband. She had noticed that after dropping off their vehicles, customers would leave the shop, saying they would be back after they got something to eat.

Regina suggested they come up with a way to throw in together by offering food for the customer, maybe opening up a hamburger place. After all, Regina had been cooking since she was a youngster, learning recipes passed down from her mother and grandmother. W.L. found a bus that someone had gutted and refit with electricity, water, refrigerator, and stove. The couple decided to begin their new enterprise by selling hamburgers. That way, when customers came to visit the shop – they could smell the aroma of something cooking, which would entice them to stay and order something to eat. When asked how she came up with the name Chuck Wagon Grill, W.L. said they first started calling the bus “the wagon” because it had a hitch used for hauling it around. From that, the name Chuck Wagon Grill just seemed to fall into place. Regina decorated the area with western décor, befitting of the name.

Initially, the area between the tire shop and the bus was a wide-open space. A few picnic tables were added so customers would have a place to sit down and enjoy their burgers. But mostly, it was a take-out joint. Later, W.L.and Regina decided to provide an actual seating area so customers could have a place to eat and visit year-round. That was when the original dining room was built. W.L. and some of his friends added the closed-in area that connects the bus to the tire shop.

In 2013, they added another dining area because their business was booming, and they needed more seating space. At the time, W.L.’s office was quite large. He kept his motorcycle, tires, and displays there, along with seating so that the gentlemen could come by and hang out and just have a place to talk. But one day, W.L. told Regina that it looked like he might need to give up that space to expand the restaurant. So they remodeled. W.L.’s office became the size of a cubicle, but Chuck Wagon Grill now had the capability of seating 40 customers.

W.L. and Regina are people of faith. In relaying their story, Regina quoted the bible verse that says if we have faith as little as a mustard seed, God will answer your prayers. She prayed that if it was the Lord’s will for her to join W.L. in his business, “make it work, make it work.”

Obviously, her prayer was answered.

The couple both have a heart for serving. Regina says that the transition from the medical field to the restaurant industry was easy because they both involved helping others. W.L. expressed his gratitude for customers who tell him how much they appreciate his tire service, but it’s even more gratifying when they comment that the Chuck Wagon Grill is a place to just come and sit down and talk together like a family. Active members of the St. Luke Missionary Baptist Church, W.L. serves as a deacon and Regina, a deaconess. Their motto is, “Treat people the way you want to be treated.” Their greatest desire is to meet the needs of others and give back to the community.

Both businesses have earned stellar reputations. The Chuck Wagon Grill serves old-fashioned, hand-pressed, made-to-order burgers with all the sides and fixins, a Texas-sized breakfast menu, a buffet that serves two or three different meats, and up to six vegetables all made from Regina’s family recipes. And that’s just the start. Don’t forget about the pies, banana pudding, cakes, and all the other sweet treats Chuck Wagon has to offer. Chuck Wagon has catered for all events, from local to as far away as Houston and Dallas. Tillis Tire and Detail has earned its own outstanding distinction. Tire stores from Centerville and Huntsville, Grapeland and Trinity, tell their customers, “If we don’t have the size tire you are looking for, go see Tillis.”

W.L. and Regina believe in giving back to the community. You can see their catering wagon at local events offering free hot dogs, donating meals to charitable events, always seeking opportunities to pay forward the support they have received from local residents.

Tillis Tire and Detail and Chuck Wagon Grill are located at 805 South Fourth Street. Stop in and let W.L. take care of your vehicle needs. And while you’re waiting, grab something to eat from the Chuck Wagon Grill. You won’t be disappointed by either business.