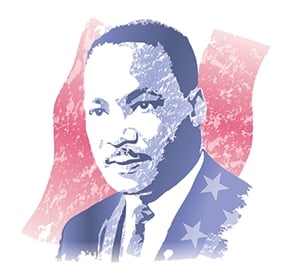 CROCKETT – On Monday, Jan. 17, citizens of Houston County will gather to honor Martin Luther King Jr. Day with a parade around the courthouse and a celebration at Davy Crockett Park.

“Unity in the Community” is the theme for what organizers hope will become an annual tradition. The parade will begin at First Baptist Church and make its way around the square to eventually conclude at Davy Crockett Park.

Colonel Cedric G. Hill will serve as the parade’s grand marshal. A graduate of Prairie View A&M, Colonel Hill has served in the military since his commission from Prairie View in 1992. A highly decorated officer, Colonel Hill also has a Master’s Degree in Sociology and in Counseling & Guidance from Prairie View and a Master’s from the University of Houston Graduate School Of Social Work. While at the University of Houston, he was nominated by his peers and was awarded the Martin Luther King Social Justice Award. Colonel Hill, his wife Dionne, and two children, Tevin and Cedric Hill Jr., reside in Houston.

High school bands, businesses, civic organizations, 4-H Clubs, churches, car clubs, and trail ride clubs are encouraged to participate in the parade. Applicants must pre-register before Jan. 13. The parade lineup will start at 8 a.m., with the procession beginning at 10 a.m.

Vendors are invited to set up tables and booths at Davy Crockett Park. For more information regarding the festivities, please call or text KJ at 936-300-2477.