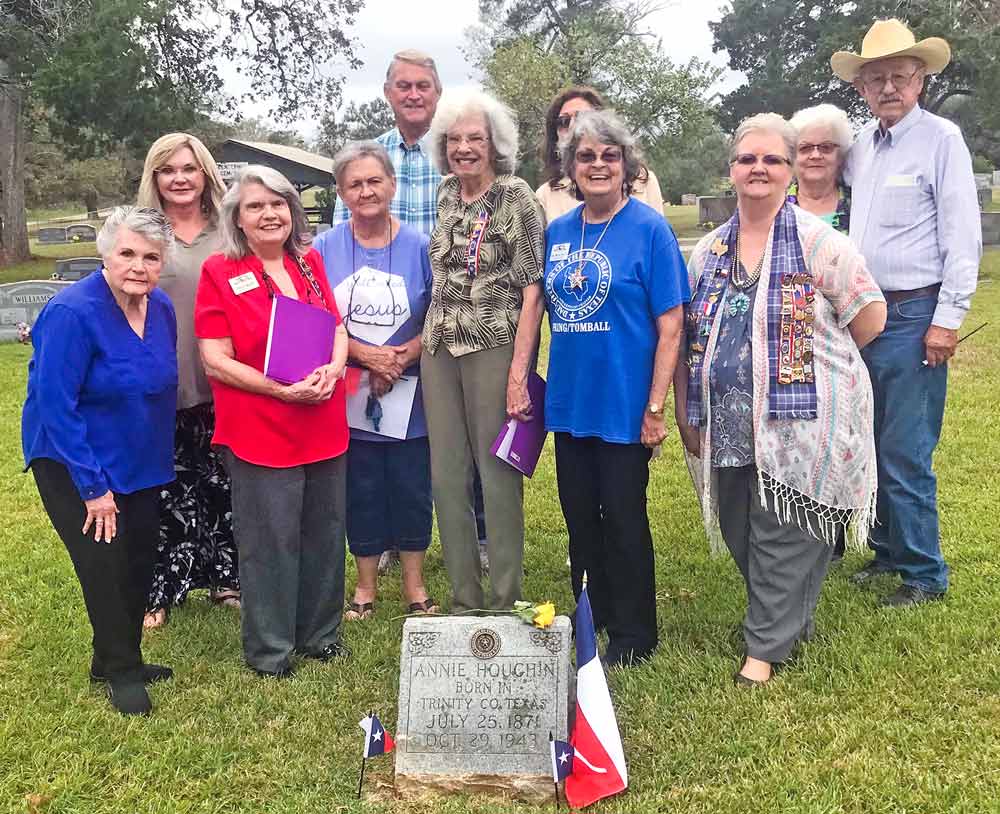 LOVELADY – It’s the summer of 1891. In the law office of William Ballinger, Betty Ballinger and her cousin, Hally Bryan, are deep in conversation over a recent discovery. During their visit to a local Galveston cemetery, they discovered the unkempt graves of two Texas Patriots, David G. Burnet and Sidney Sherman. Burnet was the first president of the Republic of Texas snd Sherman, a veteran of the Battle of San Jacinto. The neglect greatly impacted Betty because her maternal grandfather, Wil-liam Houston Jack, had also fought at the Battle of San Jacinto. Surely there must be a way to help preserve these historic graves and honor the heroes who were such an important part of Texas history.

Their discussion leads to an idea. Why not form a ladies’ organization dedicated to keeping alive the memory of the heroes of San Jacinto. Their course of action? Solicit support from other women of Tex-as whose husbands or ancestors had helped the Republic achieve and maintain its independence.

When Hally’s father learns of the plan, he offers to assist the women. Guy M. Bryan is the Texas Vet-eran’s Association president. Bryan has his own connections to Texas heroes. His mother, Emily Aus-tin Bryan, is the sister of Stephen F. Austin,

so understandably, Guy is eager to see history preserved. He offers to introduce Betty and Hally to two influential women who might aid their cause - Mary Smith Jones, widow of the last president of the Republic of Texas, and Mary Harris Briscoe, widow of Judge Andrew Briscoe, a signer of the Texas Declaration of Independence.

What began back in 1891 is still carried on today. On Oct. 26, members from the Daughters of the Republic of Texas (DRT) gathered at the Center Hill Cemetery in Lovelady to recognize two former members. Annie Houchin, born in 1871, and her daughter Minnie Cordelia Houchin May, born in 1891, were awarded a Daughters of the Republic of Texas medallion.

President of the New Kentucky Chapter of DRT, Carol Ann Waldrop, and Parliamentarian Marie Howell conducted the ceremony. The medallion was revealed, and a single rose, symbolic of friend-ship and remembrance, laid atop each woman’s headstone. In attendance for the reveal was special guest Linda Sue Martin of Galveston. “Susie,” as she is known by friends and family, is the grand-daughter/great-granddaughter of the honorees.