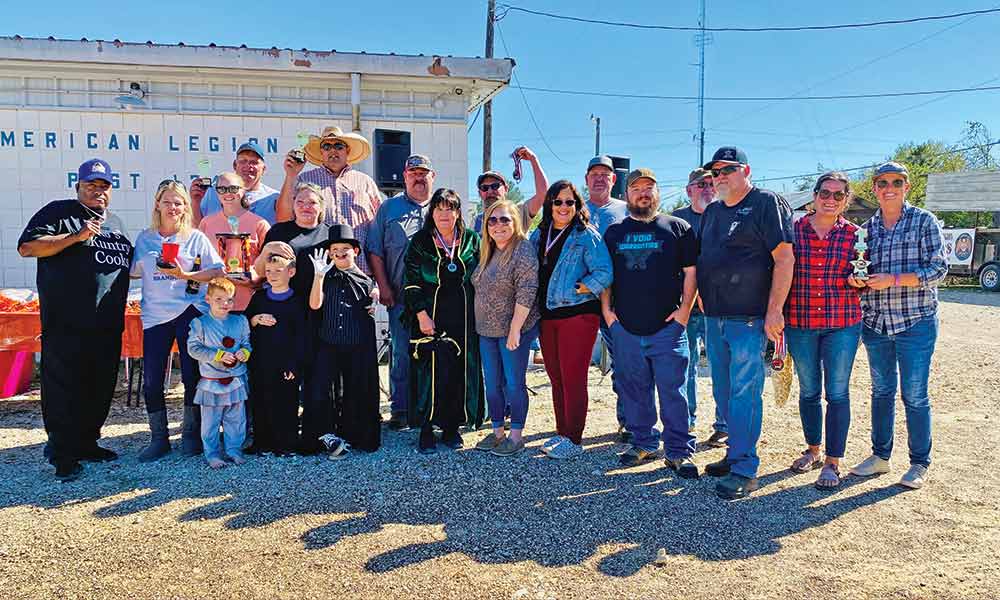 CROCKETT – Last week, the heavy wind that blew in from the west disappeared just in time for the Courier Cook-Off, providing the perfect weather for a bowl of chili.

Folks from all over Houston County and surrounding counties traveled to the American Legion Post #134 on Saturday, October 30, to taste-test chili, beans and barbecue. The event kicked off with a “thank you” to the cooking teams for their participation and veterans for their ultimate sacrifice.

This was followed by the Pledge of Allegiance recited by four attending children and then a moment of silence for those who didn’t make it back home.

Live music was provided by Chris Edwards, Houston County Courier’s news editor, and the aroma of multiple barbecue pits and chili pots filled the crisp air. Children competed in the Halloween cos-tume contest, trick-or-treated from booth to booth, had their faces painted by the Ladies Auxiliary, and bounced in an inflatable house donated by M&G Inflatables. Residents of Houston County showed up and honored their local veterans in what has been the most successful Courier Cook-Off to date.

Last year, COVID didn’t stop us. We took precautions and had ten chili teams and two barbecue teams and raised $1,000.

This year, we had twelve chili teams, eight barbecue teams, seven cornhole teams, four vendors, and after expenses and payouts, we raised and donated just under $900.

For the first two years, the cost of a taste testing wristband was $10. To make it more affordable, we lowered the price to $5. Veterans’ wristbands were free, although many still insisted on donating the $5. We spent more on trophies and prizes to give our winners a memento, which was more rewarding than just a certificate. So, while the money raised is lower this year, we hope these changes give us a solid foundation on which to grow.

Once families, friends, and neighbors taste-tested to their stomach’s content and our panel of five judges reached their conclusions, the cook teams and attendees gathered in anticipation of the an-nouncement of winners.

“Before we announce the winners, there are two people that we would like to recognize. The first per-son I called when this cook-off was in its very early stages of planning. I knew that he had a little more knowledge about cook-offs than I did, so I asked for his advice. The conversation ended with him agreeing to be a judge, and he has judged every year since. He has helped fill the spots on the panel, offered suggestions, and each year I call him and ask, ‘So remind me again how we did this…’. I would like to recognize Rodney Taylor as an honorary judge,” I said.

After receiving his plaque and a photo, I retook the microphone.

“If you can believe it, we had a hard time getting veterans involved in this. On the afternoon before the first cook-off, I remembered a friend I  made while working at Sears who happened to be a Veter-an. I gave him a ring, and he agreed to be there bright and early to judge chili. Before this, he did not know about this event and was quite impressed with our efforts. He immediately became the missing link between the American Legion and the Houston County Courier. From that day forward, he has been the backbone of this operation. I would like to recognize Milton Ladnier as the ‘Most Valuable Player’ in the Courier Cook-Off.”

Milton is now the Commander of Post #134 and Houston County’s Veteran’s Service Operator. Once asked to say a few words, he kept it short and sweet by reminding those in attendance that the Amer-ican Legion is here to serve the Veteran’s of Houston County and their families, calling it “their home.”

I led with the winner of the costume contest. With nearly 50 contestants, it wasn’t easy to choose a favorite with such a variety of characters. Jan & Gary White were the judges, and they agreed that a terrifying mummy, Jordan Garcia, would take home the trophy and the bucket of candy donated by Morris and Sharon Luker.

The winners of the cornhole tournament were announced. With six male teams and one female team, it may seem hard for some to believe, but the Corn Dogs, a female duo, won the first place trophy and 50% of the entry fees, which totaled to $105. What’s even more interesting is these ladies are both coaches in the Austin school system and were only in Houston County to house/dog sit for a family member. The runner-up was a team called M&R, and they received a medal for second place.

The winner of the booth decor, by a longshot, was Kenneth Brooks. He wowed the crowd with his Halloween-themed tent, vampire costume, and seven-foot-tall werewolf.

First Place for Jackpot Beans was Taylor & Sons out of Madisonville. His winnings were $150.

We’re given one day per year to celebrate veterans, and that day has been deemed “Veterans Day.” These men and women went out into the unknown at a young age and fought for our freedoms today. And many are still fighting for us to keep them. In a world like we’re living in today, where everything they fought for is being threatened and taken away, they deserve more than one day. Many are in con-stant need of food, healthcare, and a roof over their head. In Houston County, we may not see the se-verity of some veterans’ hardships, but they’re there. A fundraiser like the Courier Cook-Off may not give them much, but it does provide a cushion for times of need or crisis.

Thank you, Houston County, for loving your veterans!

“Never was so much owed by so many to so few.” Winston Churchill