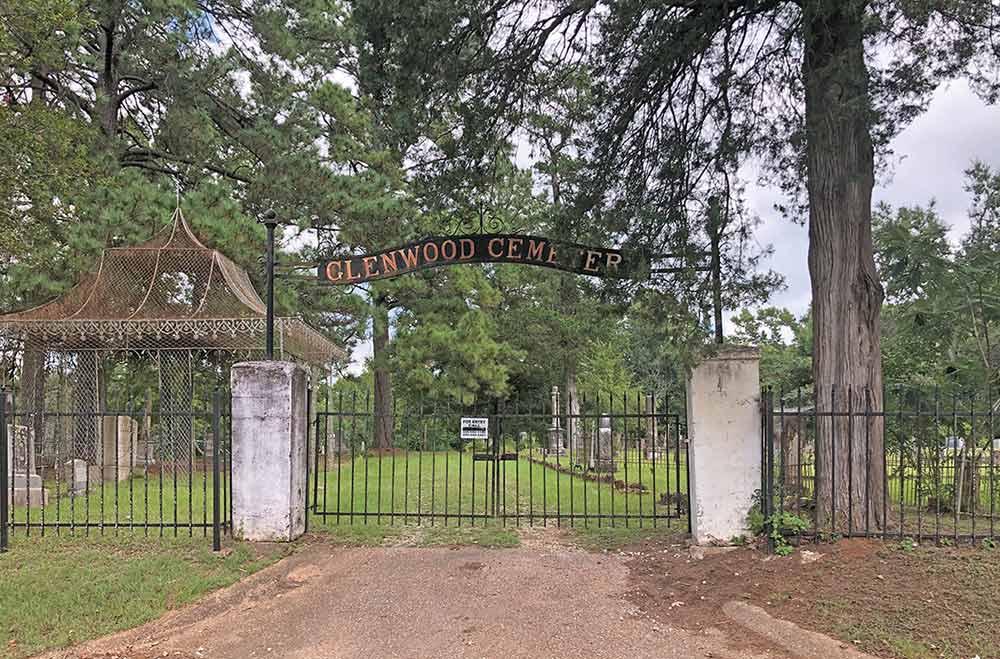 The entrance to Glenwood Cemetery, the oldest in Crockett. (JAN WHITE | HCC)

When you live in the oldest county in Texas, you are bound to hear stories about hallowed grounds where the restless spirits of Indians and Confederate soldiers roam. Our third installment of eerie anecdotes is about three areas said to be haunted by these troubled spirits.

Pine Springs Campground, located about fourteen miles northeast of Crockett, was known as a favored campsite of the Tejas Indians. “Miss Eliza” Bishop would tell stories of her encounters with what she called “Ghost Indians.” These ghosts made their presence known either in the spring or early autumn. There are those who believe the best time to commune with these spirits is around midnight on Halloween.  They typically communicated through rushing winds, which came up unexpectedly, and swept through the pines. And if you were very quiet and listened closely, you could faintly hear the war whoops and yells that echoed through the forest.  They say the spirits return each year to the Pine Springs Campground. Many people make an annual pilgrimage to Pine Springs Campground to attune to the spirits that inhabit the area.

Caddo Mounds is one of the best-known and extensively investigated Indian sites in Texas. Six miles southwest of Alto, Caddo Mounds consists of three large earthen mounds and a large portion of a prehistoric village. While two of the mounds represent communal structures serving multiple functions, the third mound is a burial site for elite members of the community. This would explain the claim that the mounds are haunted by an Indian woman dressed in white. This tale has circulated since the 1970s. The woman has been seen sitting atop of or wandering among the mounds, weeping for her lost loved ones. Some claim that a banshee haunts the area, wailing a sorrowful, piercing cry.

Nestled in a secluded area off the town square stands Crockett’s oldest cemetery, Glenwood Cemetery, built soon after the county seat was founded in 1837. While a beautiful place to visit during the day, you might want to steer clear of the historical site after dark. Glenwood is the resting place for many Confederate soldiers. But it might not be, as they say, their “final” resting place. There are rumors that the ghosts of these soldiers wander restlessly among the tombstones. Witnesses have reported seeing a ghostly image hobbling across the graveyard on crutches because of a missing leg. Other apparitions are missing hands or arms, all of which are thought to have been lost during the war.  There are those who claim they’ve heard the soldiers whisper from beyond the grave, phrases like “war is hell,” or more plaintive cries such as “Here I am General, over here.”  One local resident claims that “The Confederate soldiers who rest in the old cemetery appear to be no more peaceful than they were while waging war.”

Many people try to convince themselves that there’s no such thing as ghosts. But if you talk to someone who has experienced the phenomenon, you might find yourself swayed into believing. Of course, you could always spend a night at one of these “haunted” places and find out for yourself.