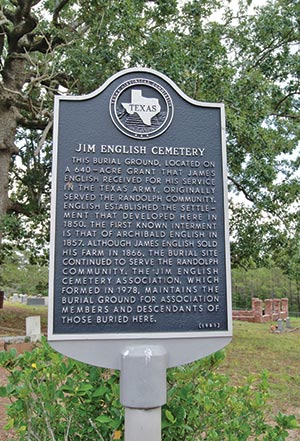 The marker at Jim English Cemetery is one of the 255 historic site markers in Houston County issued by the Texas Historical Commission. (COURIER FILE PHOTO)By Jan White
This email address is being protected from spambots. You need JavaScript enabled to view it.

Houston County is rich with historical markers. You can spot their distinctive shape without even knowing what they commemorate. But where did they originate? What qualifies a person or place for this distinction? A little background information helps us understand how these markers came into being.

As much as we'd like to think that historic preservation was an American idea, the practice actually started in England. In 1863 a member of Parliament, William Ewart, presented the idea to the House of Commons. It wasn't until 1889 that the United States government took a step in this direction by reserving a tract of land in Arizona containing the prehistoric Casa Grande Ruin. But there was no actual legislation concerning preserving natural, cultural, or scientific features, although there were efforts toward preservation in the 19th century. On a steamboat ride past Mount Vernon, home of George Washington, Louisa Cunningham noted its deterioration and began a money-raising project to buy and preserve the property. Inspired by her mother's concern, Ann Pamela Cunningham initiated her own campaign. In 1853 Ann founded The Mount Vernon Ladies' Association, recognized as the oldest private preservation organization in the United States. Through funds raised, the Association was able to purchase the home.

No official preservation steps were taken until 1906, when Congress, concerned over private collectors removing artifacts from federal lands, like Chaco Canyon in New Mexico, created The Antiquities Act. The Act gave the President of the United States authority to create national monuments from federal lands to protect historic and prehistoric sites and prohibit excavation and destruction of antiquities.

A decade later, in 1916, President Woodrow Wilson established the National Park Service, whose primary purpose was preservation, regulation, and management of the parks, historic buildings, sites, and monuments.

By 1935, Congress passed the Historic Sites Act. Its policy permitted the Secretary of Interior to create programs for preservation efforts. This Act allowed for the organization of national parks under the National Park Service, which in turn founded the National Register of Historic Places. This register is the official list of districts, sites, buildings, structures, and objects worthy of preservation.

In addition to the National Register, there are plaques designated by states, city and local markers, University historical marker programs, and historic districts. Texas alone recognizes more than 3,678 historical landmarks.

In 1953, the Texas State Legislature established The Texas Historic Commission, although the Legislature established the agency in 1953 as the Texas State Historical Survey Committee with the task to identify important historic sites across the state. The Texas Legislature changed the agency's name to the Texas Historical Commission in 1973. Along with the name change came more protective powers, an expanded leadership role, and broader educational responsibilities.

National Park Service plaques are unique in that they only mark locations, and don't commemorate people or events.

The Texas State Legislature first created the Texas Historical Commission in 1953. Initially, it was called the Texas State Historical Survey Committee and was formed to identify important historic sites across the state/ When the Legislature changed the organizations name in 1973, they expanded its leadership role, broadened educational responsibilities, and endowed more protective powers. Their focus was on preserving the real stories of Texas history by discovering and documenting places and stories of the state's rich cultural heritage and the establishment of communities.

From attracting tourists to generating jobs and income, historic preservation is important to towns, not only from a historic aspect, but according to an economic impact study in 2015, preservation activities in Texas contribute over $4.6 billion annually to the state.