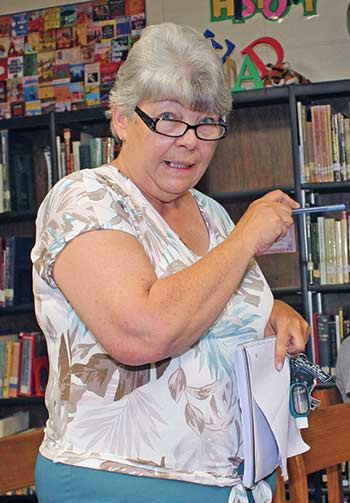 Angal Biano, above, the mother of a Latexo ISD student, addressed the district’s trustees and superintendent about vaping, an issue that she said is affecting district students, including her son, at a Sept. 9 meeting of the district officials. (ALTON PORTER | HCC)By Alton Porter
This email address is being protected from spambots. You need JavaScript enabled to view it.

LATEXO – Members of the Latexo ISD board have approved extension of paid leave that may be taken by district employees who need to quarantine due to coronavirus virus infection.

At a regular meeting of the Latexo Independent School District’s Board of Trustees, held on Thursday, Sept. 9, the trustees voted to pass a motion to adopt a “Resolution of the Board Regarding Extension of Leave for Employee Quarantine.”

“This has come out across the state, of course, because we’re still fighting Covid,” Superintendent Michael Woodard said to the trustees. “And so, everybody’s putting their resolutions at different districts to benefit all employees. Some are putting in 10 days to 20 days.

“I don’t want to put a number on it; so, I won’t put a number on this one. I just think we have enough built in our budget to cover sub pay for when teachers get sick, or all staff get sick. That way we’ll just cover it, and we won’t take their days from them. I think it’s the right thing to do here in this time.”

Woodard added, “We’ve still got some that are sick and we’re getting better. But this will be proactive back to the first day of school. That way it just won’t cost them their … days for getting sick and having to quarantine. Like I said, I just hate to put a number date on that because it affects different people different ways, different times.”

In answer to a question from Board Vice President and Position 3 Trustee Bobbie Jo Frizzell, Woodward said the resolution’s extension of paid leave is just for Covid-19-related sickness. “They’ve got to bring us a doctor’s note that they tested positive,” he said. “That is for all employees.”

According to the resolution, the Board is authorized by Texas Education Code Section 45.105 to expend district funds for purposes necessary in the conduct of its schools as determined by the trustees.

In addition, the resolution states, “the Board acknowledges that during an epidemic (such as the Covid-19 pandemic), District employees may be instructed not to report for work after exposure in the immediate household for quarantine” and “the Board finds that a need exists to address additional leave for employees who are instructed not to report for work.”

“(T)he Board determines that employees who are instructed not to report to work may suffer a loss of pay if they do not report for (work)” and “the Board concludes that providing additional paid leave to regular employees—contractual and noncontractual, salaried and non-salaried—who are instructed not to report to work due to an epidemic, serves the public purposes of protecting students and staff, reducing turnover, and maintain morale,” according to the resolution.

Therefore, the trustees voted in favor of the resolution, authorizing the providing of “additional paid leave for all regular employees … who are instructed not to report to work during an epidemic.”

The resolution further states that authority granted by it “is to provide additional paid leave for all employees instructed not to report to work for the entire duration of COVID sickness with a doctor’s note.

“This extended leave expires at the end of the 2021-2022 school year. If the federal government mandates federal leave after the date of adoption, the leave provided in this resolution will expire.”

In other business, the Latexo ISD trustees adopted a resolution, approving an appraisal roll as certified and forwarded to them by Chief Appraiser Carey Minter, of the Houston County Appraisal District. The appraisal roll, which had been reviewed by the trustees, now becomes the tax roll, the resolution states.

In another action, the trustees voted to approve the appointment of six students’ parents who expressed interests in serving as members of the district’s School Health Advisory Committee (SHAC) during the current school year.

Woodard said the SHAC wellness policy will be ready for approval at the next school board meeting, so consideration, discussion and approval of that agenda item was tabled.

Another agenda item—discussion and approval of the purchase of a truck for the district’s maintenance department—also was tabled.

Likewise, no action was taken on an agenda item regarding removal at this time of the district’s marquee sign that is in front of the site where the planned gymnasium and community events facility will be constructed, or whether to have another sign placed at a spot near the facility of which construction will begin soon.

District Business Manager Jo Lane presented an overview of the district’s Financial Integrity Rating System of Texas (FIRST) ranking to the trustees and superintendent. “This is the 19th year we’ve had this FIRST accountability system,” Lane said.

“Superior being the very first one; that is what we received—a Superior (Achievement) rating.” She said the district has received the top rating the last 10 years, adding, 845 (82.84%) of 1,020 Texas districts that were rated received a superior rating this year. “We’ve always done pretty good here because we keep a pretty good handle on our finances and our … fund balance,” Lane said.

And the trustees approved an adjunct faculty agreement the district has with the Houston County Texas A&M AgriLife Extension Office, adopted a resolution requesting extracurricular status for the district’s students 4-H organization and approved the final reading of the Texas Association of School Boards Policy Update 117.

In his monthly report to the trustees, Woodard noted that preliminary construction has begun in preparation for the start of the building of facilities included in the plan for the district’s $5 million bond construction project.

A lot of people are excited that they’ve seen construction going on, the superintendent said.

During the public comments part of the meeting, Angal Biano, the parent of a student enrolled at the district’s secondary school, addressed the district’s officials again about vaping, which she says is an issue among male and female athletes and other students in the district, including her son. Biano—who suggested that the trustees adopt stricter policies addressing the issue—and Jennie Eberts, another secondary school student’s parent, also spoke to the officials about the matter at an April 8 meeting last school year.