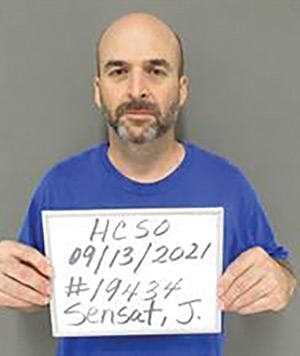 Jonathan Paul Sensat By Chris Edwards
This email address is being protected from spambots. You need JavaScript enabled to view it.

CROCKETT – An investigation of sexual misconduct at a Crockett massage parlor led to an arrest on Monday.

Smith said that the arrest was the conclusion of a month-long investigation into allegations of sexual misconduct, some of which occurred while Sensat was giving massages at the Crockett business.

It was also discovered that Sensat’s license to practice massage therapy has been expired. A search of the Texas Department of Licensing and Regulation database shows his license as having expired on August 31, 2020.

Smith added that Sensat is also a licensed Texas Peace Officer but is not currently employed by any law enforcement agency.

In their investigation, Crockett Police investigators interviewed multiple victims who gave statements detailing sexual misconduct during massage sessions, and more than one victim reported that they were sexually abused by Sensat as a child.

Sensat was taken into custody and booked into the Houston County Jail. He is being held on a variety of charges, ranging from second-degree felony sexual assault and indecency with a child to a misdemeanor license violation.

His bonds were set at a combined $100K for the two second-degree felony charges.