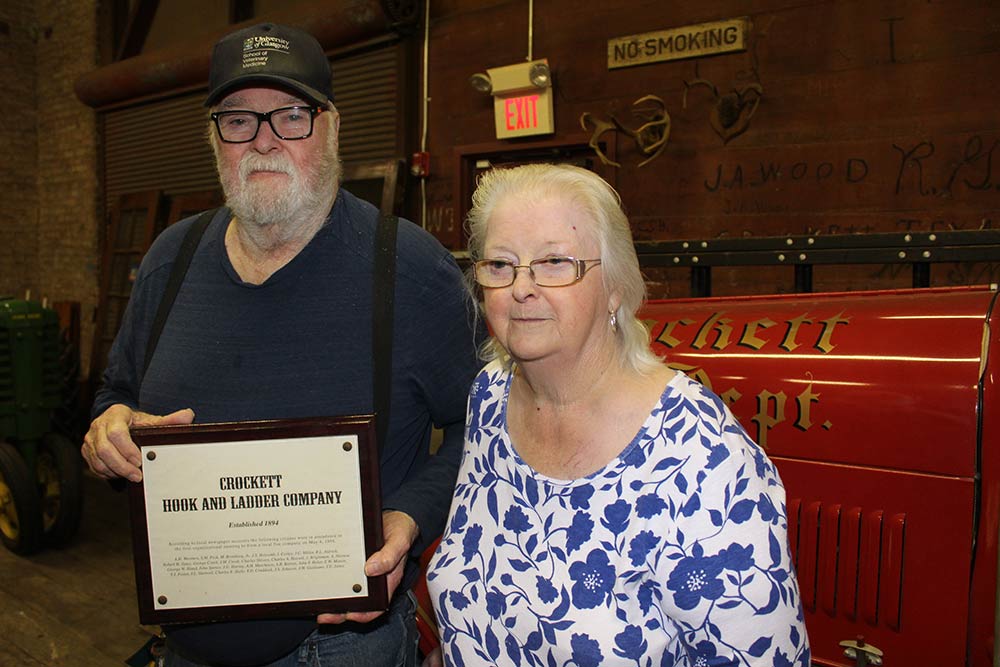 Dorothy Harris, president of the Houston County Depot Museum board, recently showed museum visitors—in addition to many other items—a former Crockett Fire Department fire truck that was the main vehicle used to extinguish a fire at the former Crockett Hotel in 1973 and is now on display at the museum.ALTON PORTER | HCC

CROCKETT – The Houston County Depot Museum is back open and invites the public to come visit the historical items exhibition facility, view its display items and learn about the history of the county.

Dorothy Harris, president of the museum’s board of directors noted, in an interview with the Courier, that it was closed over a year due to the Covid-19 pandemic and structural damage caused by February’s severe winter storm.

However, the museum reopened for its 2021 season July 9. It is open Friday and Saturday each week, 11 a.m.-3 p.m. “We’ll be open until it turns cold; that could be November or December,” Harris said.

“We’re not open in the winter because we can’t afford to heat it. We have to close. I wish it was where we could (be open in the winter) but we only go on donations. We’re usually open each year from about April through November or until the first really cold spell.”

The former 1909 International-Great Northern Railroad Depot, located at 303 S. First St., in Crockett, is the home of the museum.  “We’re always looking for volunteers to help us,” Harris said. “We currently have four.”

Harris said that this year’s opening was delayed, partially by Winter Storm Uri. “We had damage when the snow hit. It had damaged three rooms, the sheetrock—everything. So, we just got it repaired and put back together. All of that has been redone,” she said.

Museum volunteer Patsy Stokes added “We had water damage up here and all this (in one of the museum’s rooms) got wet. So, we were shut down for a good while. We’re still trying to get back.”

In an email message, Stokes also stated “We had a good bit of damage caused by frozen water pipes. We don’t have many volunteers and it took a lot longer to get ready to open (this year) because of that.”

Concerning what the museum has to offer and what she wants the public to know about it, Harris said “We house Houston County history the way life was back in the beginning. They can get a history lesson because it’s history.”

Harris said the late Eliza Bishop, who was known as the county’s historian as well as for other accomplishments, first acquired the proposed museum many years ago “but it didn’t really open until 2009.” At that time, “I became president and I set all of this up,” Harris said. “Before, it was just in boxes that had gone out and had been stored at everybody’s house for the remodeling because in 2000 they started remodeling it.

“And they finished (remodeling) it in 2005, and it just sat here until 2009. I wanted it to be something that people could come see. When we set up, people started donating things other than junk. We’ve acquired a lot of stuff since we opened up to the public.”

Harris said the museum has had visitors from various parts of the US and some from other parts of the world. “They come from all over and it’s amazing,” she explained. “We’ve had them from all over—(including) Cuba, Puerto Rico, England. It really blows my mind.”

Harris’ message for members of the public is: “I would like for them to come and visit us and see the lifestyle of Houston County and how life was back when it was first started and learn some of the history of the county and the town (of Crockett). We’re the first county (in the state).

In her view, one of the main items on exhibit at the museum is a framed space shuttle item that contains a collection of commemorative pins and a medallion representing all 135 missions of America’s historic Space Shuttle Program, Harris said. The impressive, framed collection of celebratory pins was donated to the museum by former NASA CSC Manager Kenneth L. McDonald, of Crockett, in 2016.

Another item on display that Harris considers as a main one is a former Crockett Fire Department fire truck that was used to help put out a fire at the former Crockett Hotel on the downtown square in 1973.

Elmer Beard, who drove a fire truck and helped put out the hotel fire, and his twin sister, Delmer Woolley, were visiting the museum when the Courier interviewed Harris and Stokes.

“I was in a different truck getting oil changed and they had just got through (when the fire call came in),” Beard said. “And I jump in (the other) truck and ran up there. I was the first one in the Crockett Hotel when we got the call. I tried to make it to the top floor and couldn’t make it.”

Other items that rank high on Harris and Stokes’ lists of items to see are a many years old John Deere tractor, which was loaned to the museum by the late Bill Sharp; a 175-year-old sewing machine; a rocking chair that Sam Houston used to sit in; and the museum’s military room.

An interesting item on display features information about the late Howard Wooten, a Black Tuskegee airman and ace pilot from this area, who fought and was killed in World War II, Harris said.

She said her most favorite items at the museum are a peach witching stick, which was used in the past to locate underground water streams so that wells could be dug, and a display of the late Ben Chamberland’s drug store liquor sales and related records taken during prohibition in Crockett in the late 1920s.

Drawing attention to a few of the many other items on display, Stokes pointed out old tools people used for farming, gardening, lawncare and other work. “You wonder, ‘How did they get so much done back then?’ Stokes said. “We have all these modern electronic things right now. This is what they had.”

Harris and Stokes showed the Courier “the first phone booth from the first phone company in Crockett and the county. “It didn’t have a pay phone; it just had one with no numbers,” Harris said. “And this was the switch board (a telephone company console unit established by John Loch Cook in 1910).”

Stokes called attention to several items, including old fashion women’s hair dressing equipment; two handmade dresses from many years ago; a replica put together by a group of school students depicting the 1838 Edens-Madden Massacre by Indians in the county; and the museum’s coal mine room which contained ledgers and other items.

Stokes pointed out many names that were inscribed on bricks on the exterior of the former train station building by many visitors who came up to it throughout the years. “That’s one of the things we decided to call attention to,” Stokes said. “All up and down here where there are bricks people, throughout the years, have written their names.”