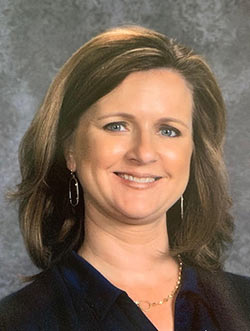 LATEXO – Kathryn Mattox Jenkines has been hired by Latexo Independent School District officials to serve the district as principal of Latexo Elementary School.

District Superintendent Michael Woodard introduced Jenkines and the district’s five custodial staff members at a board meeting Thursday, July 15, and the Latexo ISD board of trustees approved the hiring of the new principal.

“I’m excited for this opportunity to be back in the community that I grew up in and graduated from Crockett High School,” Jenkines said. “I’ve been gone for a long time but happy to be back.

According to the district’s website, Jenkines has worked in child welfare prior to becoming an educator, and she worked in various capacities at Madisonville Intermediate School.

“We’re looking forward to having you here and think you’re going to do a great job,” Latexo ISD Board President and Position 5 Trustee Kelly Nicol told Jenkines.

Concerning those staffers, Woodard said, “These guys are amazing. I’m proud of you guys and what you’re doing for us. We’re glad to have you.”

Nicol added, “You guys are the first line of defense in keeping all of these kids (Latexo ISD students) healthy. It’s a real important job; we appreciate you all for doing it.”

Ross, who heads up the custodial group, has been employed by the district two years, Woodard said.

In other business, The Latexo ISD trustees voted to approve and accept the first two-thirds ($720,737) of Elementary and Secondary School Emergency Relief III (ESSER III) funds granted to the district through the federal American Rescue Plan (ARP)) Act of 2021.

The remaining allocation—one-third ($360,368) of the ESSER III funds—granted to Latexo ISD through ARP Act will be made available after the US Department of Education (USDE) releases a state application process and USDE approves Texas Education Agency’s required state plan.

The purpose of ESSER funds in general is to award subgrants to local educational agencies to address the impact Covid-19 has had and continues to have on elementary and secondary schools.

Among other meeting agenda items requiring action, the trustees approved, the district’s contracting, for the 2021-2022 school year, with Chase Network Services, LLC, which provides entities with information technology services and assists the entities in managing the services and offers solutions for related matters when needed.

The trustees approved continuing to contract with the Goff & Herrington, PC, certified public accounting firm, of Lufkin, the school district’s auditor, for the 2021-2022 school year.

A motion to approve the district’s teacher pay scale for the 2021-2022 school year carried on a vote taken by the trustees. “This pay scale is pretty much the same that we’ve had the last two years,” Woodard said. “We just added an extra step—Step 22—to it. We do have 12 teachers that fall into that range.” Step 22 provides a pay rate for faculty members who have 22 years of experience.

Another motion to approve contracts between the district and the Region VI Education Service Center were approved by a motion that passed on a vote taken by the trustees.

Cafeteria prices for the 2021-2022 school year were raised to $2.60 at the elementary school and $2.75 at the high school and approved by the trustees on a recommendation made by Woodard. Free lunches are available for some students, Woodard and Business Manager Jo Lane said, adding, “but not across the board.”

Woodward noted that district officials have received Policy Update 117 from the Texas Association of School Boards and copies of the document, which contains amendments to be adopted and added to the district’s policy manual, are available for the first of three readings to be done by the trustees.

The trustees approved acceptance of a bid submitted by Crockett Farm & Fuel Center offering the sale fuel to the district during the upcoming school year.

Woodard reported that ERI Consulting, Inc., of Tyler, which performs environmental consulting services, performed asbestos and related testing on the district’s campuses. A cleanup was done in the cafeteria, the Latexo ISD superintendent said.

“We are asbestos-free. “We’re in compliance there. That was a total makeover. At the last board meeting, you all saw everything pointed out in the seating cafeteria. We have painted walls in there now. The floor was torn up; we went back with a gray floor and did some more remodeling there. It looks nice. There’s no more asbestos in there now.”

Asked by Position 6 Trustee Chris Morris if the entire campuses are asbestos-free, Woodard said, “We do have a few other spots, but it’s not active. They (ERI Consulting staffers) did come through and test everything and we are in compliant…. So, we’re now back to where we should be. The makeover is pretty amazing.”

The district’s Meet the Teacher event for next school year will be held, Thursday, Aug. 5, beginning at 4 p.m.