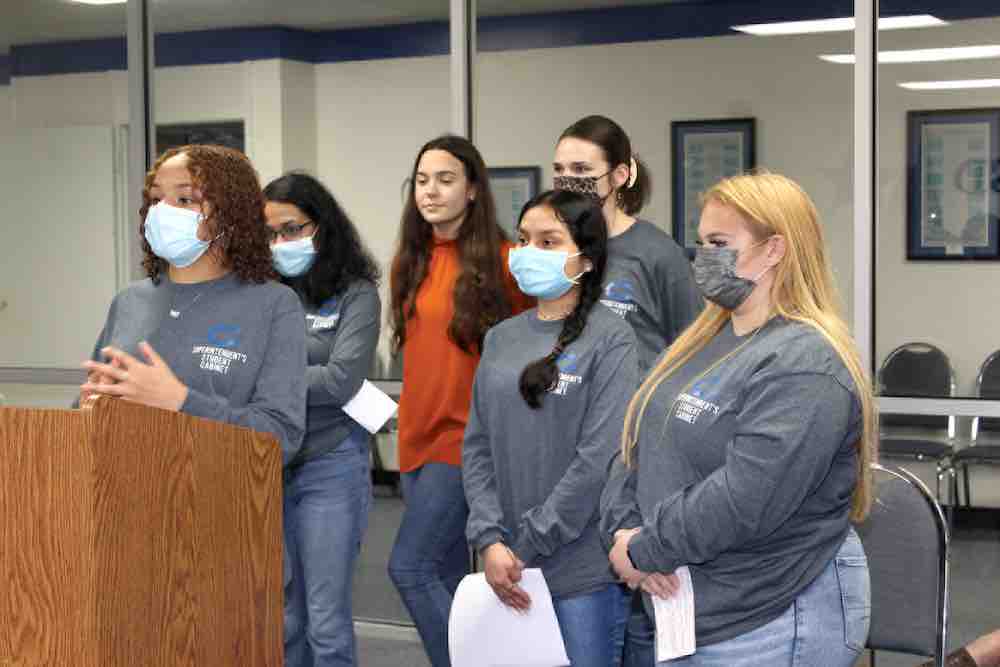 ALTON PORTER | HCC Six members of CISD Superintendent John Emerich’s Superintendent’s Student Cabinet, pictured above, shared comments about their experiences on the cabinet at a board of trustees meeting Monday.

CROCKETT – The usual activities of Crockett ISD’s School Health Advisory Council (SHAC) were curtailed because of the coronavirus pandemic during the 2020-2021 school year, however, the council was still able to take a few policy-related actions and kept tabs on health-related issues, according to Superintendent John Emerich.

In his monthly report to the Crockett Independent School District Board of Trustees, at a meeting Monday, Emerich explained that the district’s SHAC is an advisory committee, and its purpose is for members to “look at health-related things and bring recommendations to me.

“They had their last meeting of the year” recently and there was “a couple of big items from that meeting.

“Obviously, there were a lot of things this year that we were not able to do because of Covid. So, some of the things in the family and community involvement area—we didn’t have much there.

“But a couple of big things I do want to point out is that we had an audit this year of our nutrition services, and they passed for that. And so that was part of this. I think Ms. (LouAnn) Turner (Chartwell Food Service director of child nutrition) was on that committee.

“One thing that came out of that was any policies that have to be in place—they actually wanted to look at some of those. But we passed on all of that.”

Emerich continued, “They did talk about the mask policy. Of course, that’s been taken care of by your action last month and also by the governor’s action now. So, nothing more to say there.

“And finally, one of the other things they did is they listened to a presentation that they recommended. And I want to tell you that, based on that recommendation, we allowed a company to come in. They’re actually in district today (Monday, May 24) and they will be in district tomorrow.

“That comes in and does imaging on our employees if they so choose. It’s a voluntary thing if they want to do that. And I know we’ve had a lot of staff members take advantage of that. I don’t know the final number is going to end up being, but a lot of people thought that was a good thing to do.

Next, Emerich announced that a district Employee Appreciation Breakfast, instead of a luncheon this year, is scheduled for Friday, June 4, at which, end of year awards will be presented to winning staff members, beginning at 9 a.m.

Emerich reminded meeting attendees that June 17 is the deadline date to nominate persons for Ring of Honor recognition this year. He said no nominees had been received as of Monday.

During his report, Emerich also introduced six members of the Superintendent’s Student Cabinet and gave them the opportunity to speak about the experiences they’ve had and the input, suggestions, concerns and opinions they’ve voiced to Emerich as cabinet members to help themselves, other students and community members.

“I cannot thank these ladies enough for what they’ve done for the district in giving their time this year,” Emerich said.

Following discussion in an executive session at the meeting, the trustees voted to approve the hiring of a new CISD Assistant Superintendent, Brian Aiken.

In other meeting agenda items requiring action, the trustees voted to accept the donation of a laptop computer, delivered by Jason Barron on behalf of ABM, the district’s commercial janitorial services contractor.

The computer is to be presented to a Crockett High School graduating senior in June. “We will continue to do this throughout the year,” Barron said. Other donations also were accepted by the trustees.

In other business, the trustees approved a food service management proposal approving the continuation of Chartwell as the preparer and provider of food for district students.

“We were just very glad and honored to be part of Crockett ISD,” said Turner, the Chartwell director. “And we have been for 15 years. We appreciate it.”

In another action, the board members adopted a resolution, extending the district’s depository contract with a local bank.