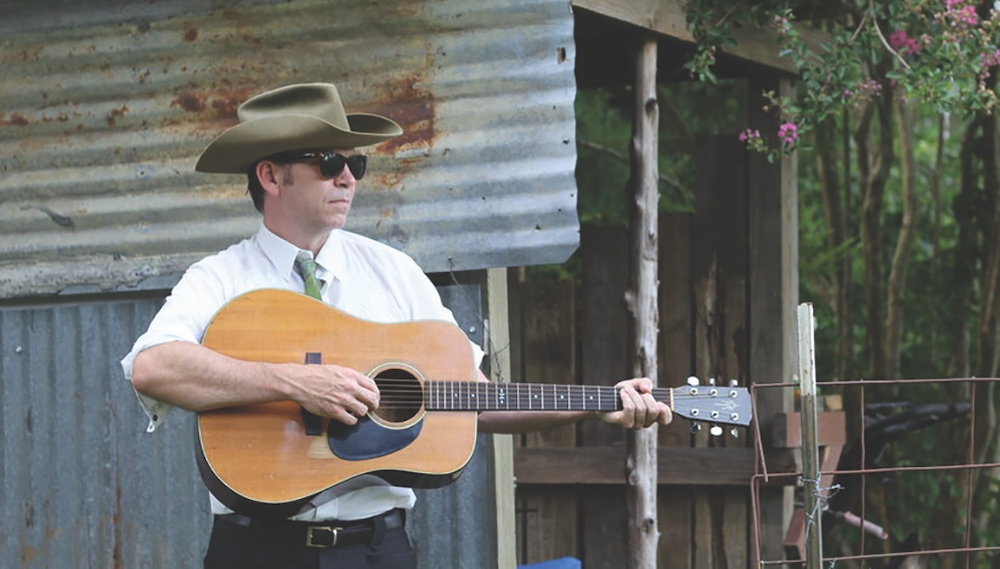 CROCKETT – Country Willie Edwards is a name well-known to many music lovers within the East Texas region.

Edwards, a singer-songwriter, whose sound harkens back to the days of troubadours such as Ernest Tubb and Hank Williams, will appear at the Camp Street Café, in downtown Crockett, on Saturday, May 29. The show begins at 8 p.m.

Edwards is currently promoting his latest record, Midnight Cowboy, a 14-track collection that was recorded at Encore Studios in Nacogdoches with Heath Perritt engineering. On the album, Edwards’ deep, bass-baritone vocals and acoustic guitar mastery is joined by his longtime drummer/percussionist Thomas Oliver. Edwards and Oliver fill up an astonishing amount of sound space for just two musicians, both on record and in live performances. Edwards’ vocals, which are tuneful and resonant, are at the forefront, and cover the frequencies a bassist would typically occupy. Occasionally Edwards and Oliver are accompanied by a standup bassist for live shows.

Onstage, Edwards is a man of few words in between songs, instead, he allows his music to tell the tales. He maintains a powerful stage presence with just the performance of his songs, and it is something that has endeared him to many audiences. One reviewer, Kevin Curtin, in the Austin Chronicle, wrote the Edwards “transformed into the coupling rod on a locomotive via his right arm, which strummed with unrelenting momentum.”

Oliver said he has enjoyed working with Edwards through the years. “Working with Willie is amazing,” he said. “He is a master of his own craft. He takes the simplest things in life and turns them into folk classics. It is just a treasure, for me, to be a part of the rhythm to help Willie deliver his final product.”

Alongside his unforgettable stage presence, Edwards has also gained a cult level of interest in the Texas songwriters’ community for his large repertoire of original compositions. Some of them, such as “Marfa Lights,” “Rollin’ Down the Highway” and “Dallas in the Night” are standards at his shows and inspire singalongs with those in the know. To the uninitiated, they are liable to be singing along (and tapping toes) well before the performance’s end.

The new record is a whole slate of songs sure to become crowd pleasers. Songs such as “When I’ve Finally Gone Crazy” and “Down by the Railroad Tracks” seem to transport the listener to a roadhouse on the outskirts of town, circa 1955, but at the same time, there’s still a modern edge in some of the lyrics.

Edwards’ music has made him something of a legend among connoisseurs of live music, and not just in Texas. He grew up in the tiny Cherokee County community of Sardis, where he returned to establish roots in recent years. A farmer by trade, Edwards has been playing music from a young age, when he led hymns in church and played the East Texas opry circuit as a teenager.

Since his collegiate days, he has played before live audiences steadily, and became a favorite in the Nacogdoches area, typically mesmerizing audiences as a solo acoustic act. Throughout his career, he has also played in bluegrass bands, like the Nacogdoches favorite the Remains, and even led the punk band Country Willie and the Cosmic Debris, which showcased a more rock-based influence, and allowed Edwards’ songwriting to branch out to include lyrics that worked in his fascination with extraterrestrial matters, as well as B-movie type imagery about zombies. Edwards also starred in a film, Rainbows End, which was directed by Eric Hueber, a filmmaker and musician, who played in the Cosmic Debris. The film documented an ill-fated tour undertaken by the band and featured a cast of other real-life characters associated with the band, including the late East Texas mystic Audrey Dean Leighton.

Aside from his live gigs, Edwards has also recorded many albums, in a variety of locations. The latest album is available through his website, www.countrywillieedwards.com and will be available at the show.

Despite all of his recognition and achievements within music, and other media, Edwards remains a humble country boy. “He is so humble, and so talented,” Oliver said. “Just a great dude!”