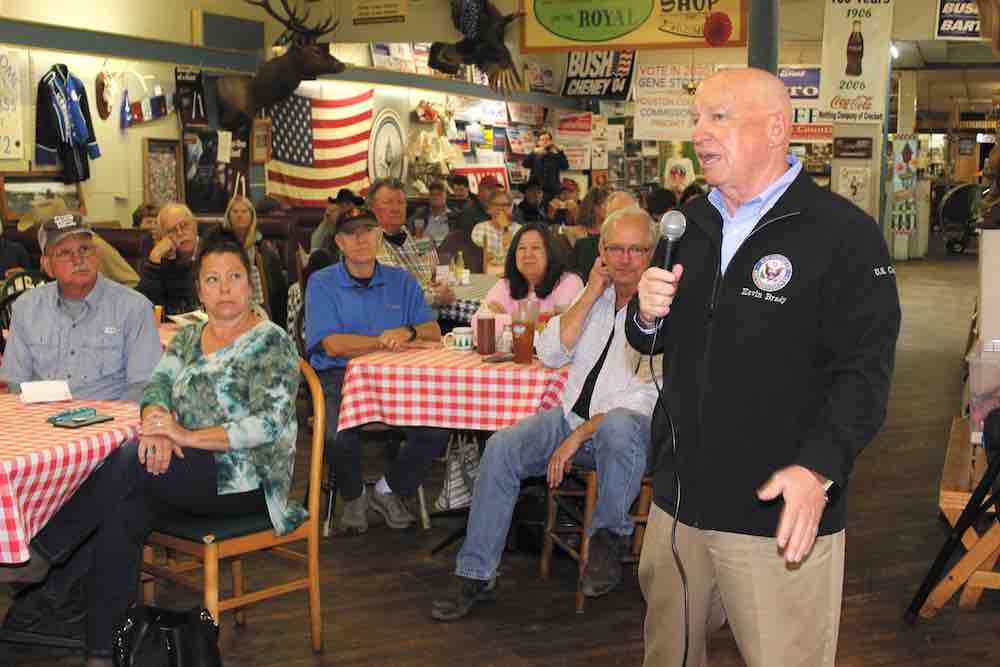 CROCKETT – US Congressman Kevin Brady (R-Tx 8) held a town hall with an audience in Crockett at the Moosehead Café on Monday highlighting his presentation with a talk about what he termed a “border crisis” on the southern border of the United States.

“So, right now, I know President (Joe) Biden is in denial, but we’ve got a humanitarian crisis at the border,” Brady said.

“We’ve got a security crisis at the border. The number of those illegal (immigrants)—whether they’re kids coming without their parents or single people coming across that border—has just surged since the election,” he continued.

Brady also spoke about Biden’s halting of the border wall construction and the reinstatement of a release policy for undocumented border crossers.

Brady also spoke of issues with law enforcement surrounding the border issue. He said the number of home break-ins have surged in Uvalde, where police officers are engaged in 10 to 12 dangerous car chases each week and city officials are seeing property damage.

“This president, President Biden, he incited this border surge. He needs to take responsibility for it,” he said.

Before speaking about the border issue, Brady touched on several other issues, and he responded to comments and questions from attendees.

One point he addressed is a bill that passed the House to nationalize state and local elections, which he said would effectively ban states from having voter ID laws, allow same-day voter registration and ballot harvesting.

“Plus, when they take over our state and local elections, I guarantee you we’re going to have less integrity in our elections, not more. And we’ve got a problem right now where a lot of Americans just don’t trust election results,” he said.

In answer to a question, asking what Senate Republicans are doing to stop this, Brady said, “They couldn’t do anything about that COVID bill because they (senators) did it with a simple majority (vote). As long as Democrats don’t get rid of the filibuster and Republicans hang tight, those bills don’t go farther. What our (Republicans) role is right now (is that) not a single Republican voted for Covid (stimulus) payoff. No one voted for the (elections) nationalization. No one voted to defund the police, which was the next bill. No Republican voted to ban state right to work laws,” he said.

Brady also addressed “two more gun-control bills that will do nothing to keep us safer—do nothing to keep guns out of the hands of criminals, just make it harder for law-abiding citizens to be able to defend themselves,” both of which passed the House two weeks ago.

“We all … want these mass shootings to end,” he said. “Those two bills they passed, which I opposed, won’t do a single thing to stop a single mass shooting.”