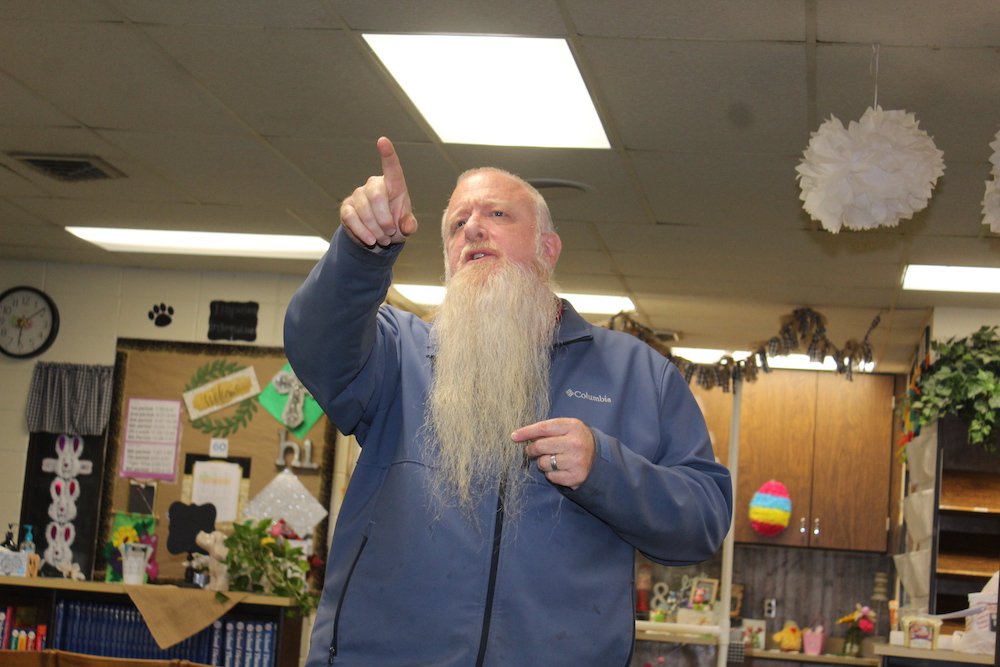 ALTON PORTER | HCC Director Chris Cravens, of Latexo High Schools Career and Technical Education program spoke to Latexo ISD trustees about activities CTE students currently are engaged in and plans that are being made to provide more opportunities for them in the future at a meeting Thursday, May 18.

Members of the Latexo Independent School District Board of Trustees have cancelled the district’s May 1 election as the two incumbent candidates who were seeking reelection in the scheduled election were unopposed in their bids to continue serving as trustees.

The Latexo ISD trustees took the action during a board meeting Thursday, March 18, following a discussion in a closed, executive session.

The two board positions up for election are Position 3, held by Vice President Bobbie Jo Frizzell, and Position 4, which is filled by Secretary Jeffrey Catoe.

“In the school board election, nobody signed up (to run against Frizzell and Catoe), so we don’t need to have that,” Superintendent Michael Woodard told the trustees. “So, Ms. Bobbie Jo and Mr. Catoe are good for another three years—nothing to worry about. I just ask you guys to cancel that (election) because we don’t need it.”

In other business in the open, public part of the meeting following the executive session, the trustees voted to approve a 2020-2021 Public Health Planning Guidance policy for face coverings for staff members and students in the district to be recommended as presented.

Woodard said, the district’s recommended policy regarding the wearing of masks is being typed up and will soon be released. “We haven’t had anything in our district since Jan. 27,” the superintendent said. “So, we’re going to look at it (the district’s mask policy) and if anything happens, we’ll come back and … look at recommending it. We came back from spring break; we had no issues. Nobody’s sick….”

Also, following the closed session, the trustees addressed personnel matters, approving 2021-2022 teachers contracts as presented, administrators’ contracts and acceptance of the resignation of a Chapter 21 employee who was a pre-kindergarten teacher.

Woodard reminded the trustees of the second reading of the Texas Association of School Boards Policy Update 116 and that it will be placed before them for adoption at their next meeting.

Cravens spoke to the trustees about agriculture and technology departments activities, the district’s health science program in which a clinical practicum program was implemented in December in partnership with Crockett Medical Center (CMC), and opportunities school staff members are planning for students.

Ag students are building trailers, one of which they plan to be enter in competition at the Houston Livestock Show, Cravens said, adding, some of the students have their National Center for Construction Education and Research core certificates and others are ongoing with a “floral buddies” project, where they sell floral designs to faculty and staff members.

Cravens said all plants in the school’s greenhouse were killed by the freezing temperatures, snow and ice of last month’s severe winter storms. He said efforts will be made to purchase some plants for the greenhouse if there are any available.

“We were all set, before the snow hit, to sell plants to the community,” said Cravens. “And that was going to be another way to raise money with the community. Unfortunately, now that’s not going to happen. The only damage that I remember that was done in the greenhouse was one of the pipes burst. But, other than that, there was no real damage to the greenhouse, so we’re happy about that.”

In the technology department, a student in the robotics class built a robot’s arm and other students have been engaged in other projects, Cravens said.

In addition, two of the students have had the opportunity to observe two surgeries that Dr. Clifton O’Meara, an orthopedic surgery specialist, have done, Cravens said.

Cravens said 10 LHS junior students have said they are interested in participating in the program next year, when it might be expanded to last all year.

CTE opportunities that are being planned for students include expanding the practicum/clinical program, possibly hooking up senior students who are receiving advanced welding training with Vulcraft and floral design students with a local florist, Cravens said.

In the works is a heating, ventilation and air conditioning (HVAC) program to be implemented in partnership with Grapeland Independent School District officials and under the auspices and direction of Angelina College staffers, who have expressed an interest in developing a HVAC program in Houston County, the Latexo ISD CTE director said.

Latexo ISD would provide the facility for the HVAC program and Angelina College would provide up to $200,000 worth of equipment free of charge to the school district and would pay for the instructor. The program would require that 10 to 12 students be enrolled in it each year, Cravens said, adding, at the end of the program, the students would receive residential HVAC certificates.

Also, efforts are being made to offer assistance to technology-minded students who want to obtain employee certification by Dell Computer company, Cravens said.