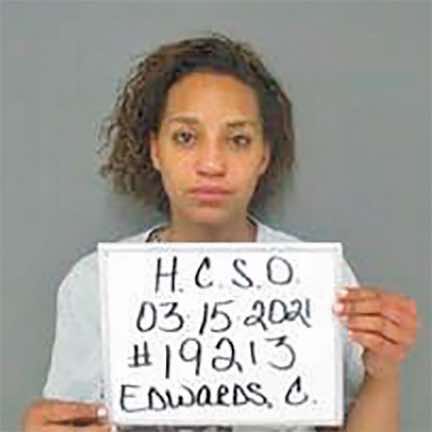 CROCKETT – A second arrest was made in connection with the disappearance of Faye Lynn Paul on Monday.

Crockett Police Chief Clayton Smith announced on Monday that Clara Kimble Edwards, age 31, was taken into custody by investigators on the charge of Tampering with a Human Corpse, a second-degree felony. Edwards was apprehended with the assistance of the US Marshals’ Service, at her family’s home in Houston County.

According to Smith, the arrest came about through the ongoing investigation into Paul’s murder. Houston County District Attorney Donna Kaspar approved of a warrant being issued for Edwards’s arrest.

Crockett Police began investigating Paul’s disappearance in February of last year, when the 79-year-old Crockett woman’s Chevrolet Impala and her nephew, David Wayne Denson, were also missing. A Silver Alert was out for Paul, and the Houston County Courier was notified that Denson was wanted for questioning about his aunt’s whereabouts.

Denson and the vehicle were both located, and the 25-year-old man was brought back to Crockett from Alamosa, Colo., where he was discovered, for questioning and on felony charges for violating an existing probation.

Although Paul was not located after Denson was questioned, Smith announced in March 2020 that his department was actively investigating Denson for capital murder. Earlier this month, the case was presented to a Grand Jury, which returned a True Bill for the case. A True Bill indicates that enough evidence was presented to proceed with a trial.

Smith added in a news release on Monday that Paul’s remains have yet to be recovered. “Investigators hope to one day be able to locate her and provide the family with some closure,” he stated in the release.

Edwards is currently being held in the Houston County Jail on a $100,000 bond. Crockett Police are encouraging anyone with information about the case to contact them at 936-544-2021.