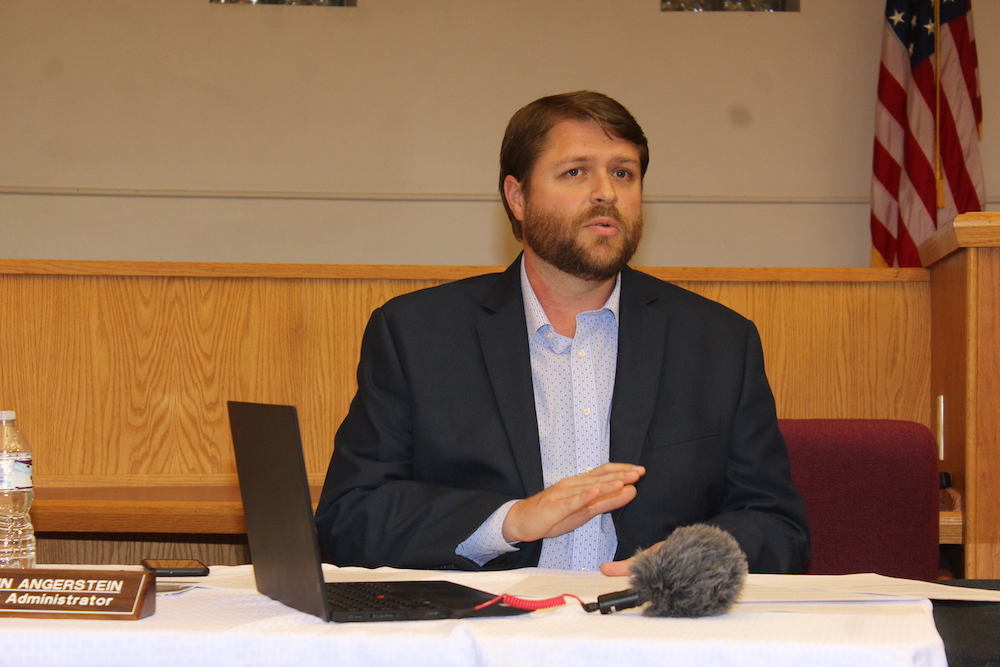 ALTON PORTER | HCC Crockett City Administrator John Angerstein, above, updated the city’s councilmembers on last month’s winter storm events and water losses and announced that the city has recovered from most of the damage done to its water system by the storms at a meeting Monday evening.

The city of Crockett sustained damage as a result of last month’s extremely cold winter storms. However, the city has recovered from most of the water problems and other damage caused by the weather events that were atypical for this part of the country.

City Administrator John Angerstein presented an update on the recent “winter storm events and water loss” to Crockett city councilmembers and they discussed the matters at a meeting Monday evening.

In a related item of business, the councilmembers voted to pass a motion approving a policy, which offers certain city water customers the opportunity for a one-time adjustment to lower their bills for “water loss due to the winter storm damage/leaks.”

“Friday through Sunday (Feb. 12-14), after we were getting reports in from our weather forecasters, we realized that it (the winter storms) was going to be even worse than we initially had been told,” Angerstein said, in presenting his update, referring to a timeline he had distributed to the councilmembers.

The timeline “gives everyone an idea of when this event happened and kind of our recovery process throughout it,” the city administrator said.

“So, we sent out a couple of PSAs (public service announcements)—one on Friday and one on Sunday. We started scrambling as a city, going around and winterizing everything, covering and insulating all of our pipes, and doing what we could to double check our pumps and exposed piping and everything.

“As a note, our pumps, all of our exposed piping, weathered the storm event really well. We have 12-inch water mains that go up our towers; those actually froze. We had heaters on those, keeping those thawed out. That’s how cold it really got.”

“But we lost a couple of pumps at our wastewater plant due to freezing,” said Angerstein. “And we lost a pump on our sewer trailer. As we were trying to work it and also take care of sewer issues, the water froze up within that pump and it cracked as well. Those are insured losses.

“Other than that, we faired (well), as a city, with our city infrastructure and our pumps and our systems. We came out of it with relatively little losses.”

Angerstein continued, “During the night between Sunday and Monday (Feb. 14-15), is when things got serious for us enough to where our (water) system pressure really dropped…. We had no explanation for it, so we began sending people throughout the city, thinking we had water mains that had broken.

“Between Monday, Tuesday and Wednesday (Feb. 15-17), our pressure just continued to drop with just no end in sight, and all the way up until last weekend, we were continuing to find water leaks. As of that time, we had turned off approximately 500 meters at locations where we had found leaks.”

Angerstein noted that city officials and staffers opened the Crockett Civic Center as a warming shelter for residents whose electric power was out and needed a warm place to stay during the extremely cold weather days.

“As a city, we spent a lot in manpower—staffing, overtime, fuel, equipment—but did not receive any really uninsured damages or losses,” Angerstein said.

Concerning the Water/Sewer Bill Adjustment Policy, adopted in response to the winter storms, “Angerstein noted, “The city of Crockett is helping its water/sewer utility customers who experienced significant higher water/sewer bills as a result of water leaks resulting from the winter storms and prolonged freezing temperatures during the week of Feb. 14, 2021.

“If you are a city of Crockett water utility customer and your water/sewer bill that included the week of February 14 was at least 25% higher than the billing average of your November 2020, December 2020 and January 2021 bills, you are eligible for a one-time water/sewer bill adjustment.

“The adjustment is based on an assumption that such an increase would be due to a water leak. If eligible, the adjustment will reduce your monthly water/sewer bill that covers the week of Feb. 14 to be equal to your monthly average bill for November 2020, December 2020 and January 2021.”

Water customers who believe they are eligible for an adjustment, can contact the city of Crockett water department office by phone at 936-544-5156, Extension 206.

Also, during the meeting, the councilmembers received an update on Phase 2 of the city’s Small Business Relief Program presented by James Gentry, executive director of the Crockett Economic and Industrial Development Corporation (CEIDC).

The program provides financial assistance to Crockett small businesses that have experienced economic fallout as a result of the Covid-19 pandemic.

Gentry said several businessowners have expressed interest in receiving funds from the program.

Forty businesses were granted $500 each through the first phase of the program. The CEIDC initially put up the money for that phase and was later reimbursed with funds made available by the federal Coronavirus Aid, Relief and Economic Security (CARES) Act.

Owners of businesses with 10 or less employees that were impacted by the pandemic or last month’s winter storms may apply for funds through Phase 2 of the relief program by visiting the CEIDC office in the Crockett Civic Center or calling the office at 936-546-5636.