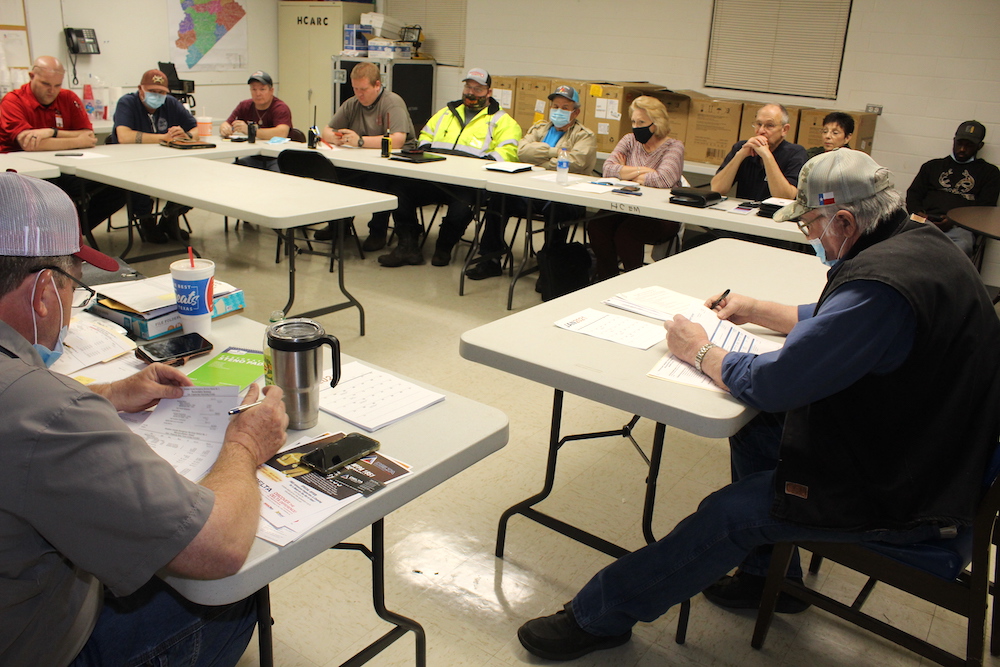 ALTON PORTER | HCC Above, members of Houston County Emergency Services District No. 2, which supports and provides assistance to fire departments throughout the county, attended a monthly meeting in Crockett Thursday, Feb. 25, at which they elected officers to lead the district and its board of commissioners and at which they addressed other matters.

Members of Houston County Emergency Services District No. 2 (ESD2) have elected new and continuing leaders for the district’s board of commissioners following the reappointment and appointment last month of two ESD2 commissioners by members of the county’s commissioners court.

The ESD2 members elected the board’s officers at a meeting Thursday, Feb. 25.

Promoted to the position of ESD2 president is William Money, who had been serving as an ESD2 commissioner and who replaces former president George Crowson Jr., who was not reappointed to the ESD2 board by the commissioners court members last month.

Elected to serve as ESD2 vice president is Steve Hawkins, who was appointed by the members of the commissioners court last month to replace Crowson as a commissioner on the ESD2 board. Hawkins was welcomed aboard ESD2 by the district’s members who were present. As vice president, he replaces former VP Bobby Hutcherson, who was reappointed by the members of the county commissioners court last month to continue serving on the ESD2 board but who stepped down from the VP position at the Feb. 25 meeting.

Peggy Patrick, who had been serving as secretary-treasurer was reelected as treasurer only upon her request, and board member Roy Langford was elected to replace her as secretary.

“In my recollection, as far as I can recall, this is my 224 meeting with the ESD of a 14-year period,” Crowson said. “To the fire departments, I want to tell you it’s been a pleasure, a privilege and an honor to serve on your behalf. What you guys do—not only what you do, but the passion with which you do it—it leaves me in awe. It truly, truly does.”

Crowson noted that county Precinct 3 Commissioner Gene Stokes, of the commissioners court, was present at the meeting and that “out of those 224 meetings which we spoke of, this is only the second time that we’ve had a commissioner at one of our meetings in 14 years. And I think I can speak for the whole organization and say, ‘Thank you for being here’.”

Stokes responded to Crowson saying, “We appreciate your service.”

The former ESD2 president continued, “I’m assuming I’m not on the board. No one has shown me the courtesy to tell me that I was not, but I kind of picked it up on the airwaves there.

“To the board, what I want to remind you of, and I hope you will think about this in every decision you make, is you are an independent political subdivision of the state of Texas. You cannot be beholden or subservient to any individual, any special interest group, any group of people of any kind, including the commissioners court. If you are, all taxing democracies will fail.”

Crowson added, “The only people you are beholden to are the people that pay this ESD tax. It has served me well. If you will remind yourself of that in every decision that you make, I think you will continue to be successful.

“This ESD is tremendously successful, at least in my opinion—not because of me, but because of the involvement of people and the (county’s fire) departments themselves. I know it is financially in good shape. And I know that through Mr. Stokes and all you other board members, it will continue to do that. 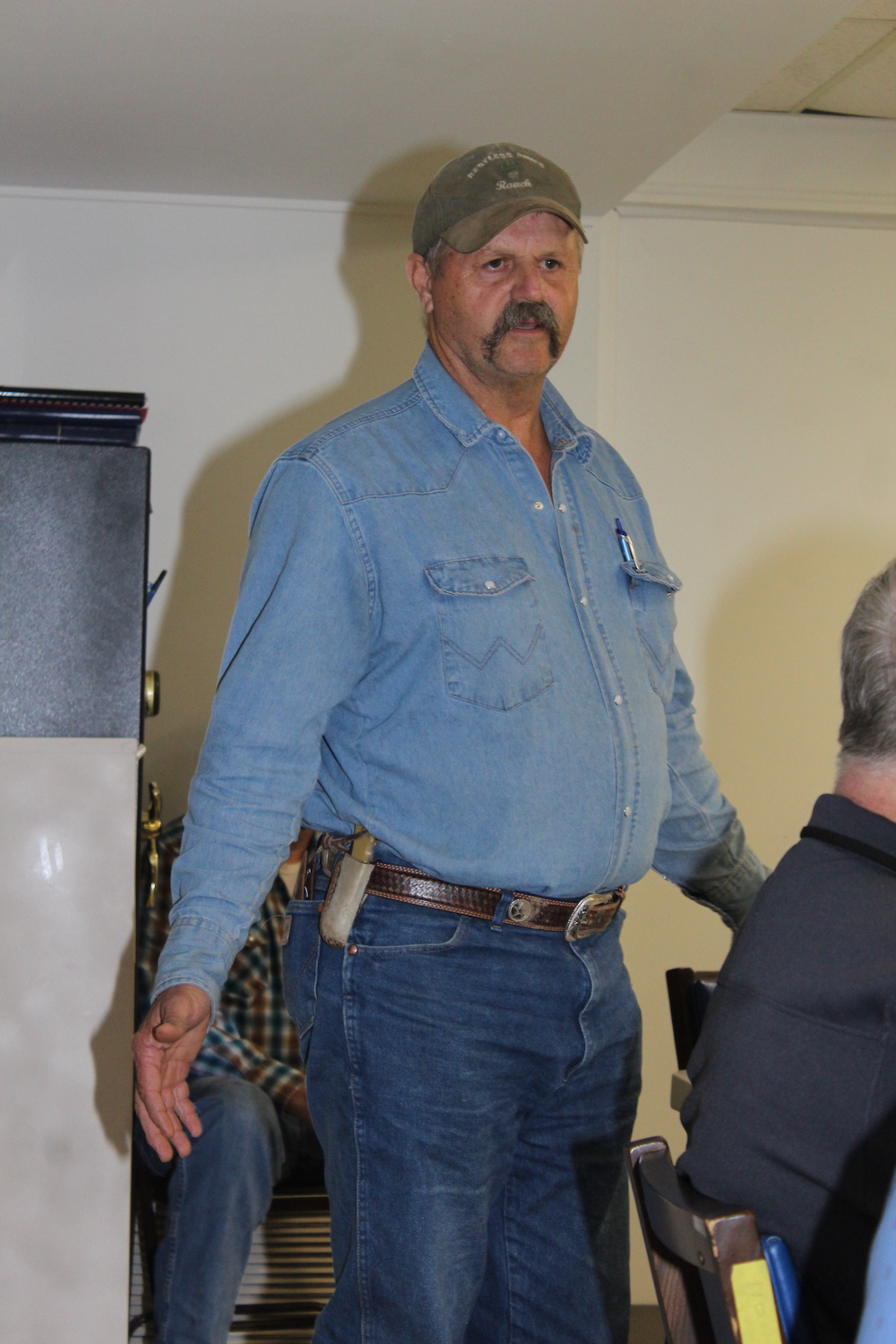 ALTON PORTER | HCC Former President George Crowson Jr., of the Houston County Emergency Services District No. 2 (ESD2) Board of Commissioners, who was not reappointed to the ESD2 board earlier last month, addressed ESD2 members as he departed from the entity during a meeting in Crockett Thursday, Feb. 25.

“It has been an honor and a privilege; I served at the pleasure of the commissioners court and it was no longer their pleasure. That’s perfectly fine; it is their option to do whichever they want to do.

“I’ve enjoyed almost every moment of it. It’s been some moments that haven’t been so enjoyable, but that comes with the territory. But anyway, thank each of you for what you do.”

After Crowson left the meeting, Money, the new ESD2 president, said, “He’s not here, but in my opinion from being on the other side of the table—he was on this side of the table—George has guided this board efficiently and diligently through a lot of stuff over the years, from helping get it started to getting it where it’s at.

“And in my opinion, our directive change is none. We’re here to serve two priorities: the firefighters (of Houston County) and the taxpayers. And that is it. I may be the next one that goes after George, but that is how I look at it. … I will do my best to continue the direction of this board and keep it solid.”

Among items requiring action, the ESD2 members voted to receive a $100 bid from Brijesh Patel, a member of the Kennard Independent School District Board of Trustees, to buy and remove, within 30 days, a building on the site on which they’re planning to have a fire station built in Ratcliff.

The board members also had advertised via the Courier for bids for the laying of a six-inch-thick concrete slab for $16,000 for the planned fire station building, but none had been received. So, the ESD2 members decided to seek out a construction company to perform this project.

Money explained, “When we formed ESD2, Crockett opted out of the vote. Kennard voted to not be in the ESD because they didn’t want (to pay) the extra tax. So, we’ve got Crockett and Kennard that are not members of the ESD….

“Crockett has basically the biggest fire department in the county—covers the most area, covers everybody else’s back. We call it the gray area. So, we contract with Crockett. We pay them $70,000 a year to cover that area. We provide some trucks for Crockett and provide them service and help.

“So, Crockett covers the gray area and that works to try to keep the ISO, which is the insurance rate, in those areas down. So, we contract with Crockett to cover that area. Crockett FD’s budget is $500,000-plus a year and we add them an additional $70,000 plus trucks or whatever we can afford to help them with to cover that area. We upped the rate and renegotiated with them. And so, we’re getting a new contract set up with them.”

Chief Jason Frizzell, of the Crockett Fire Department, said he had emailed the city’s attorney, who is reviewing and possibly making adjustments to the contract, and he was waiting to hear back from the lawyer.