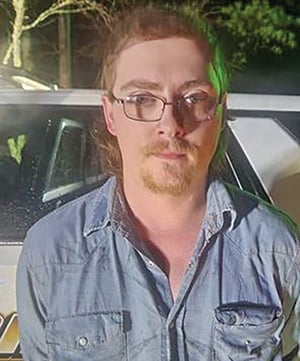 Matthew Hoy Edgar after his arrest. Photo courtesy of Sabine County Sheriff’s OfficeLOVELADY – On Tuesday, January 10, the Texas Department of Criminal Justice (TDCJ) confirmed that Matthew Hoy Edgar, convicted for the 2020 murder of his girlfriend, Livye Lewis, is now imprisoned at the J. Dale Wainwright Unit in Lovelady.

The manhunt for Edgar, which lasted almost a year came to a close on Dec. 29, 2022 near Hemphill.

Edgar, a 26-year-old Sabine County man, was arrested by the U.S. Marshals Service. He was convicted of the murder in January of 2022, and fled during his trial proceedings.

His 99-year sentence was formalized during a January 3 hearing. He was transported from the Sabine County Jail to the James “Jay” H. Byrd Unit, an intake unit in Huntsville, where he was detained for a short time before being transferred.

The Wainwright Unit, which was once known as the Eastham Unit, is historic in the annals of Texas prisons. Clyde Barrow was once incarcerated there, and along with Bonnie Parker, helped a handful of inmates break out in 1934.

When the Sabine County issued a warrant for Edgar’s arrest, law enforcement from around the region joined in on the hunt. According to Sabine County Sheriff Tom Maddox, in a press conference, lawmen followed leads provided by citizens and other law enforcement agencies, which took them into neighboring states. Ultimately, Maddox said, Edgar was taken into custody while sitting on the back porch of a local residence located not far from his family’s property and the actual homicide scene.

According to this Texas Department of Criminal Justice file, Edgar will become eligible for parole on May 31, 2052.