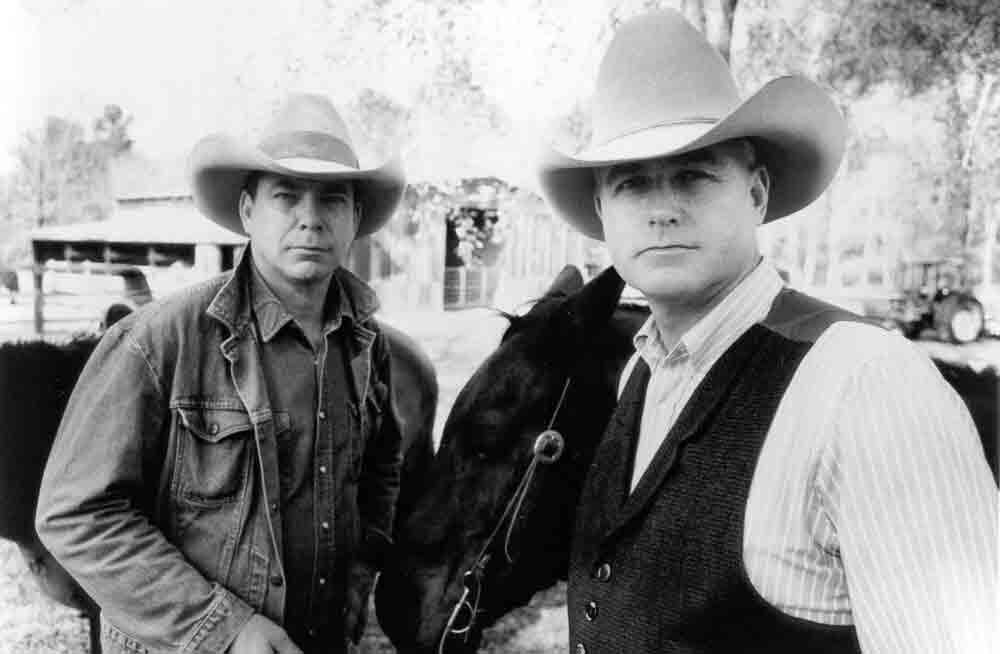 An old publicity photo of Pipp and Guy Gillette. Photo courtesy of campstreetcafe.com

CROCKETT – Writing about Pipp and Guy Gillette is like writing about Elvis – so much has been written about them that it’s hard not to be redundant. The men are legends – both locally and nationally. Pipp and his brother, Guy, who died in 2013, have been featured in news publications across the country. Texas Highways, Texas Monthly, Southern Living, American Cowboy, Western Horseman, the Dallas Morning News, and the Houston Chronicle have all profiled the Gillette brothers in featured articles.

The brothers Gillette also appeared on television shows like Texas Country Reporter, Good Morning Texas, and a Country Music Television (CMT) Christmas special hosted by Clint Black. And their work is featured in the documentary film that pays tribute to the working cowboy, Gathering Remnants.

The Gillette brothers amassed a mantle full of awards, too. In 1998 and 2003, they were given the Will Rogers Award for Outstanding Achievements in the Advancement of Contemporary Cowboy Music, Best Duo/Group by The Academy of Western Artists, and the National Cowboy Symposium’s American Cowboy Culture Chuck Wagon Award. They won the American Cowboy Culture Award in 2009, The Western Heritage Wrangler Award for Best Traditional Western Album in 2010. And in 2012 won the National Cowboy and Western Heritage Museum in Oklahoma’s “Best Original Composition” for the song “Trade Off,” a poem written by Waddie Mitchell and set to music by Pipp and Guy Gillette.

Not only have the brothers won country music awards, but their cooking was spotlighted in the Persimmon Hill magazine, the National Cowboy Hall of Fame Cookbook, A Taste of Texas Ranching, and the Spirit of the West cooking Ranch House and Range. And to top it off, they demonstrated chuckwagon cooking at the Cowboy and Western Heritage Museum in Oklahoma City.

With all their cowboy history and country music awards, it’s hard to believe that Pipp and his brother Guy grew up fifteen hundred miles from Crockett, Texas - in Yonkers, New York, with their father, a talented photographer, and mother, an aspiring fashion designer. Creativity was in their blood. So it’s no surprise that while in New York,  the brothers attended drama school at the Neighborhood Playhouse School of Theatre in Manhattan. And as teens, they formed a band called “Roadrunners,” which featured a relatively unknown singer named Diane Keaton. In the late 60s to the early 80s, the brothers played coffee house circuits up and down the east coast and toured the Midwest. During this time, they produced two record albums -  Susquehanna, released by Big Daddy Records in 1975, and Small Town Days in Nights, by the same label, in 1980.

While the brothers may have gone to school in New York, they got their schooling during summers spent on their grandparents’ ranch in Lovelady, where the boys learned about cattle and cotton and developed an affinity for the cowboy way of life.

The appreciation of this lifestyle steered the Gillette brothers’ in an unexpected direction when, in 1983, they inherited their grandparent’s farm in Lovelady and some property in Crockett. The two decided to relocate to the ranch, renovate the old homestead and revive the family cattle business.

It wasn’t just the country lifestyle they embraced. The brothers began immersing themselves in the local culture and musical history, which influenced their decision to create a venue where they and other musical artists could perform.

And they had the perfect place in mind.

The boys’ grandfather, Virgil Hoyt Porter, owned a building just off the main street in Crockett. Camp Street, the name dubbed by locals because of the teamsters and wagons that often camped on the land, was the heart of the African American business district back in the late 1800s. One particular building that Porter owned had been used as a barber shop, café, taxi stand, and pool hall. There, legendary troubadour Sam “Lightnin” Hopkins, Frankie Lee Sims, and other musicians would play for tips. Because of its historical significance, the building felt like a perfect place to transform into a performance hall. In 1998, Camp Street Café and Store was born. Pipp Gillette told interviewers, “It’s got good sound and acoustics. I always give credit to Lightnin’ Hopkins for the ambiance. It’s a place where he played, and there aren’t many of those left. Camp Street has evolved in a way we never dreamt it might.” The brothers were also instrumental in honoring Lightnin’ Hopkins by having a life-size bronze statue a placed across the road from the Camp Street Café.

Over the next several decades, the Gillette brothers became among the region’s most recognized preservationists of the traditional cowboy lifestyle and music. In May of 2012, the brothers were featured on an episode of Texas Country Reporter and revealed in the interview just how important their simple lifestyle was to them.

“The music we are mostly concentrated on and fascinated with are the folk songs that are mostly written by people who wrote about their daily experiences, their own culture, their own lives,” said Pipp Gillette. “To me, there’s nothing more exciting than that because it’s like they’re speaking out of the grave.”

Bryan Woolly of the Dallas Morning News said the Gillette Brothers “…don’t just play and sing, skimming the surface of their song. They cut to its bone and gristle and deliver it with visceral energy and integrity – a joy that is contagious. Hearing them do it makes the hearer’s life better.”

Since the passing of his brother, Guy, Pipp Gillette continues to play traditional cowboy music. His first solo CD, Singing Songs by Waddie and Pipp, received the Western Heritage Award for Outstanding Traditional Western Album of 2016. His newest CD, Pipp Gillette with Lloyd Wright, was released in the fall of 2018.

Pipp has also renewed the popularity of another of his artistic talents – wood carving. Gillette began carving and collecting decoys in the late 60s, but he gives credit to two masters of the art form – Holger Smith and Swan Brewster- for helping shape his carving skills.

“You couldn’t have had two greater guys as mentors,” Gillette said. Today, his carved birds can be found at Stories of Texas, an antique and vintage finds store in Crockett. Owner Wade Thomas frequently holds online auctions for Gillette’s carvings – once garnering over $375 for a single bird.

Even without his brother at his side, Pipp Gillette is committed to maintaining a lifestyle that honors the values, traditions, and music of the past. “I’m not opposed to progress,” Gillette said once in an interview, “but it seems a shame to me that we don’t save the good from the past, and the good from the present and the future, and try to make this all work better. The nature of our society is that the country isn’t the country anymore. What we’re attempting to preserve here is a way of life that was and still is.”