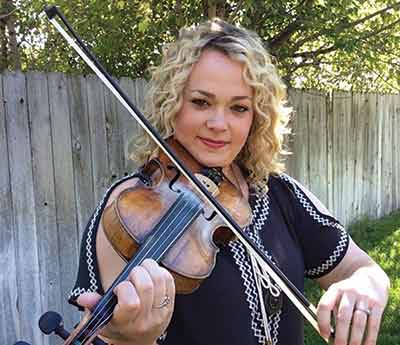 Katrina NikolayeffBy Jan White
This email address is being protected from spambots. You need JavaScript enabled to view it.

In the article, Angle wrote of the event: “Every year in the small East Texas town of Crockett, fiddlers from around the state and the nation gather at the Davy Crockett Memorial Park. Here the most skillful fiddler present is chosen. The winner is something more than the best performer

present, for this musician also carries the title of World’s Champion Fiddler. However, a description of this contest is incomplete if it stops with only the fiddler. For those attending, it is a social event of great significance.”

This year, the World Champion Fiddler Festival will be held a the Porth Ag Arena on Saturday, Sept. 24, beginning at 10 a.m. Admission is free.

Angle describes the festival’s setup: “On the northeast side of the semicircle of parked cars and pickups is located the pavilion (a euphemism for a large, tin-roofed shed), under which the contest is held. Here people gather to hear the music they have grown up with, meet their friends, get in some gossip, and judge fiddlers. Almost everyone considers himself a judge of fiddlers. In front of the pavilion, under a large shade tree, sits a wooden barrel full of water, with the name of the local funeral home printed on its side. On the south side are concession stands operated by the Festival’s sponsoring organization, Beta Sigma Phi. Also on this side is the registration table, shaded by a tent with Waller Funeral Home also printed on it. A bit further east is a group of chairs in which the contestants sit to await their chance at the prize money.

About 75 yards to the east of this area is a row of trees that follows the winding road through the park. Under the shade of these trees, cars have been parked, and around these cars, groups of fiddlers and guitar players gather for impromptu jam sessions. About four of five fiddlers and a couple of guitar players usually make up one of these groups. They agree upon one song and play it in its traditional key. Each takes his turn and plays until he is finished with his version or until one of the others in the group takes up the lead. When each has had his turn, they stop and chat a while before beginning another song.

This is not indigenous to Crockett because it happens at all fiddling contests. This gives the fiddler a chance to hear and size up his opponents and try to judge what kind of day he will have. This idea of the “good day” is quite strong among the old-time fiddlers. There are so many fiddlers of near equal skill that this plays a prominent part among the contestants in justifying the choice of the winner.”

The tradition of a fiddlers contest began in rural community gatherings in the early 1900s. Events were called “fiddlers contests” if more than one fiddler was present. Sometimes the fiddlers would meet and participate in a local ‘jam session’ to figure out who was “give up,” as they called it, as the best fiddler. If it wasn’t a contest, it was a get-together at a box supper or ice cream social. In Crockett, there had been “get-togethers” of fiddlers at the north end of town or at the home of V. B. Tunstall some years before the beginning of the Fiddler’s FestivaI.

V. B. Tunstall, Sr., known in the area as “Barker,” was the eighteenth child of a family of nineteen (his father married again after his first wife died). From an early age, Tunstall was interested in music. At age six, he studied music under Mr. Mayer, who opened an opera house in Crockett. Even though Tunstall received this formal training and was quite fond of classical music, he remained true to his quasi-rural rearing and loved the old fiddle tunes.

When he was twenty, Tunstall went to Galveston, where he studied piano tuning. He traveled about over the countryside on horseback or by bicycle tuning pianos. Tunstall was never a man to let business interfere too strongly with his great love of music. He carried his violin with him to work, and when he got the chance, he would have a “set-to” with one of his customers or with one of the families along his way, playing the old fiddle songs or sometimes more contemporary music that often came in sheet music form.

Tunstall was also the man one contacted on matters concerning music in the Houston County area. Besides tuning pianos and doing some barbering, he taught music (mainly strings) in several towns in the area, such as Corrigan and Trinity. In a time when less sophisticated media entertained people than today, Tunstall provided diversion with the assistance of his ten children. He divided them into two troops and traveled around the area performing variety shows for different groups. If someone needed musical entertainment for a cotton festival or a fiddler for a fair or dance, they sought out Barker Tunstall for the arrangements. He also amused his friends by constructing musical instruments from ordinary tools like rakes and shovels or making xylophones out of water-filled jars.

It was Tunstall who helped establish the annual event that has lasted more than 80 years, the World’s Champion Fiddlers Festival. In fact, his name became so closely connected with the contest that it was often referred to as “Barker Tunstall’s Old Fiddler’s Festival,’ and after he died, succeeding contests were dedicated in his memory.

The first World Championship Fiddlers Festival was held in 1937 when Tunstall, Terry VanPelt, Raymond Cornelius, W. E. Keeland, and Homer Galloway gathered in Cornelius’s hotel. They believed that the old fiddling tunes of their fathers were in danger of becoming extinct, so to preserve the tradition, they made plans for a fiddler’s Festival to be held in Crockett. However, the Festival was to be more than simply a plan for preservation. It was to be a day of fun for those who listened as well as those who played.

Money for the prizes came from donations made by local merchants. At first, the awards were somewhat meager, reflecting the hard times of the era. Top prizes were $50 and $25, with lesser prizes such as a box of cigars or a basket of groceries. As times improved, so did the awards, with money reaching up to several hundred dollars. In 1957, there was an exception when the grand prize was a brand new fiddle.

For onlookers, there were other attractions besides the fiddlers themselves. For several years during the mid-fifties, cowboy film star “Montana Hale” made his appearance to sign autographs, give shooting demonstrations, and participate as a judge. There were square dances and square dance calling contests. Alabama-Coushatta Indians entertained the crowds with their native dances.

In the late 40s and early 50s, Miss Eliza Bishop organized and conducted a beauty contest. Girls from Crockett and surrounding areas competed for the title of Fiddlers Festival Queen. During the “Davy Crockett craze” of 1950, the White Cross Surgical Dressing Company held a contest for boys under the age of thirteen to introduce their new “Davy Crockett First Aid Kit.”  The winner received $50 and a trip to Fort Worth to view the movie “Davy Crockett” with its star, Fess Parker. In 1961 and ’62, there were fly-ins to Houston County Airport, and the Crockett Community Council provided complimentary breakfast and transportation.

There were some back then, and probably some today, who think the festival is silly and provincial. But those who appreciate fiddle music could care less. As Angle said in his article, “The music they gather to listen to represents a pleasant relief from the sounds of the mass man and his mass culture. For some, it is a symbol of rebellion against the age, a symbol of individualism. It is not the rootless and anarchist individualism so much in vogue, for it has not divorced itself from its past. It stands proud with a firm foundation of tradition. But for others, the music is simply a part of life – the songs which, for all practical purposes, sing the praises of a return to a simpler life with traditional values. The modern fiddle contest has its message. In its own way, it also sings the praises of another way of life.” More than 50 years later, Joe Angle’s words still ring true.

A featured contestant will be Katrina Nikolayeff from Idaho, whose style has been described as “appealing and uniquely creative.”  A four-time winner of the Annual Grand Master Fiddler Championship held at the Grand Ole Opry, Katrina will be among the dozens of fiddlers competing from all over the United States for the title of World Champion Fiddler.